Portugal: Land of Myth and Legend: Part 1 Of Sebastianismo

'Portugal itself has many more myths than the rest of Europe put together, which could perhaps help the latter [Europe] realise its destiny' wrote Gilbert Durand the French Academician known for his work on imagination and mythology. You might expect a country whose people had first imagined and then actually discovered the sea route to Índia to be rich in myth and legend.

And you would certainly also expect Portuguese to tell tales and histories of the glorious events that led to Portugal´s empire over half of the world. Camões, Fernão Mendes Pinto, Father António Vieira, and more recently Fernando Pessoa all told their stories of Portugal´s greatness and destiny. And these stories encourage the belief that Portugal´s fortunes will rise again and that Portugal will become the spiritual and temporal Fifth Empire of Humanity. The return to Portugal of D Sebastião will be the sign that this final Empire (after those of the Assyrians, Persians, Greeks, Romans) has arrived.

Portugal´s great destiny was depicted in map form in the fourteenth century by Opicinius de Canestris.  His map portrays Europe as a body with Iberia as the head. In his book Secret Lisbon (first published in 2010) the renowned Portuguese historian and philosopher Vítor Manuel Adrião states that ancient versions of maps of Europe unanimously place Spain at the head of Europe, with Portugal portrayed as the crown.  Authors of the Middle Ages and Renaissance linked royal figures with gods or heroes from Greek or Roman antiquity in order to legitimise the concept of kingship and power. They also used the ideas behind these maps to aid the creation of a belief in nationhood.

The Portuguese had a great belief in the destiny of their nation, and this belief was based in the Old Testament (the fifth Empire was prophesied in the Book of Daniel) and in the Arthurian legends based in the heritage of the Celtic peoples on the Western fringe of Europe. Before the battle of Ourique, the image of Christ had appeared to D Afonso Henriques, the first king of Portugal, and in due course, the monk historians of Alcobaça would discover the direct line of succession from Noah to the Kings of Portugal.

Fernão Mendes Pinto (1509 - 1583) was a Portuguese explorer and writer.  His most famous work is his autobiographical Peregrinaçam in which he chronicled the twenty years during which he travelled throughout the Middle and Far East.  He worked as a forced labourer on the Great Wall of China; introduced the gun and Nanban trade to Japan; and funded the first Christian church in Japan as well as having been made captive 13 times and sold 17 times into slavery.  His stories were incredible and they gave rise to the Portuguese pun on his name Fernão, Mentes? Minto, meaning ´Fernão, are you lying? Yes, I am lying!´

Luís de Camões (1524 - 1580) wrote Portugal´s national epic poem Os Lusíadas, through which he had nearly as much influence on Portuguese as his near contemporary Shakespeare had on English.  Written in Homeric fashion the poem focuses mainly on a fantastical interpretation of the Portuguese voyages of discovery.  Camões suggests that the Portuguese are predestined by the Fates to accomplish great deeds.  After their victories against the Moors and the Castilians and following their discoveries of ´new´ lands around the globe, the Portuguese would become gods. Camões wrote much of his epic as he was serving in the Far East and as a part of the poem itself, he wrote a dedication of his masterpiece to his king, D Sebastião.  During the occupation of the throne of Portugal by the Spanish Habsburg kings (1580 – 1640), Os Lusíadas went through eleven editions as Portuguese dreamed of and finally regained national independence. 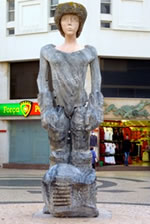 Following the death of D Sebastião at Alcacer Quibir in 1578 and the loss of the Portuguese throne to the king of Spain, there arose the mystical and patriotic cult of Sebastianismo. In their unenviable political situation, the belief grew among the Portuguese that D Sebastião (O Encoberto)  was in hiding rather than dead and that he would return - when the time was right - to reclaim the throne of Portugal from the Spanish usurpers.  Gonçalo Anes, ´the cobbler of Trancoso´, nicknamed Bandarra (meaning the Doodler, 1500 - 1556) was one of the greatest proponents of Sebastianismo, predicting in his popular Trovas de Bandarra the messianic return of D Sebastião, much to the annoyance of the royal authorities and the Inquisition.

Father António Vieira (1608 - 1697) became the most influential person in the Brazil and Portugal of his day.  Legend has it that he was a poor scholar until one day he prayed to the Virgin Mary for inspiration.  He fainted away and when he awoke he found that he had a remarkable intelligence.  He distinguished himself as a missionary and defended the rights not only of the indigenous people of Brazil but also of the Jews.  He was an early follower of the ideal of Sebastianismo and preached that D João IV was the incarnation the nation waited for and in 1659 he wrote a letter in which he explained his theory of the Fifth Empire and Portugal´s future supremacy.  He published 16 volumes of sermons and the Histório do Futuro in which he outlined how and why Lusitania will come to lead the Fifth Empire.  His works are the greatest monument to Portuguese renaissance prose. He too fell foul of the Inquisition. The English envoy in Lisbon wrote in 1668 that Vieira besides his natural eloquence has the art of making the scriptures say what he pleases.

The French Invasions of Portugal (1807 – 1813) saw a fresh interest in Sebastianismo, mainly among the poorer and less educated classes, although the poets Guerra Junqueiro (1850 – 1923) and Fernando Pessoa (1888 - 1935) later supplied intellectual weight to the nineteenth century movement.  Pessoa 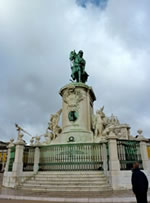 was a Portuguese poet, writer, literary critic and translator, one of the most significant literary figures in twentieth century Portugal and one of the greatest poets of the Portuguese language.  Pessoa´s only novel, Mensagem, describes Portugal´s explorations and discoveries and tells how D Sebastião will return to create the Fifth Empire, the universal empire of peace, linking the country´s historic past to its spiritual future.   He describes the destiny (fado) of the Portuguese, ordained by God at the beginning of time. It is no coincidence that many of his poems have been adapted as fado songs.

Portugal´s future role as leader of the Fifth Empire is depicted not only in the written word but it is also present in the built environment.  The Cais das Colunas in Lisbon is named after the two pillars that stand just off Black Horse Square (Praça do Comércio) in the river Tejo. This Quay of the Columns was the gateway for the Portuguese to access the Atlantic and other continents, civilisations and cultures and conversely, it is the world´s gateway to Lisbon.  It is of course the gate to Portugal through which Sebastianists believe that D Sebastião O Desejado will make his triumphant re-entry. In the middle of the square, the statue of D José I waits to announce the arrival of  D Sebastião.

Behind D José is Lisbon´s triumphal arch under which the Secret Universal Emperor will enter Lisbon to inaugurate a new age for the world. Humankind´s final empire will therefore be led by D Sebastião from his capital in Lisbon.

Portugal has no reason to feel ashamed with regard to the rest of Europe.  On the contrary, we have a lot to teach and bring to it. The Mission that concerns our principal qualities - our deeply-rooted sense of human brotherhood, the idea of Universality, and the vision of the Fifth Empire…, wrote Lima de Freitas (1927 - 1998).  Lima de Freitas also created the fourteen polychrome azulejo panels at Rossio Station and a further panel at the Restauradores metro station, each of which depicts a myth or legend from the history of Portugal.  These panels are also redolent with the symbolism of the Fifth Empire.

Dr António de Sousa Macedo published his Flores de España, Excelencias de Portugal in 1631, in which he writes of the superiority of the Spaniards over all the other peoples of Europe except only the Portuguese, who surpass their neighbours in every respect.  In this hysterically nationalist work, Macedo suggests that instead of calling Camões a second Homer or a second Virgil, it would be more accurate to call the Greek and Roman poets the first Camões. The Portuguese were the first and the most steadfast converts to Christianity and they were and are the most excellent and effective propagators crusaders and defenders of the faith.  Macedo´s book must be ranked among the works of mythology.  Strangely, his first published edition was dedicated to Felipe IV of Spain who even more strangely chose to accept the dedication.

Portugal land of myth and legend?  Portuguese writers  long for the return of those golden days of Portugal´s glorious past. Macedo writes that the Quinas (the shields with the white dots which have always formed a part of the  Portuguese national flag) owe their origin to divine inspiration.  I think that the belief in the great destiny of Portugal is part of the national psyche and that every Portuguese is at heart a poet.