´THE WORST SHOCK SINCE THE GREAT EARTHQUAKE OF 1755´.... is how the Portuguese Bank Note Crisis of 1925 has been described.

The repercussions of the case ultimately led to the most enduring dictatorship of our time (Salazar´s), wracked the Lord Mayor of London, ruined the reputation of one of the world´s great printing firms, and culminated in one of the longest and costliest cases in British legal history.

So how did the amateur, penniless, half-educated Artur Virgílio Alves Reis so nearly succeed in perpetrating a fraud on a scale unparalleled in the history of commercial swindles?

´monkey engineer´
After only a year´s study Reis abandoned his course in practical engineering to get married.  In 1916 at age 20 he got permission to go to Angola rather than serve in the army in France. He took with him a signed diploma from ´The Polytechnic School of Engineering of Oxford University´.  This diploma qualified him in twenty one subjects including Engineering Science, Geology, Geometry, Physics, Metallurgy, Pure Mathematics, Palaeography and Electrical Engineering.  He had studied everything and could do anything!  The diploma was duly notarised in Sintra.  Who in Angola would question such a document authenticated by a Portuguese notary?  In Angola Reis took a practical job on the railways as well as a desk job in 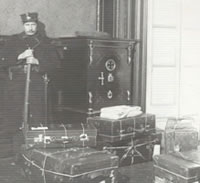 public works.  He had some engineering aptitudes and in his overalls (macaco)  he quickly became known as the ´monkey engineer´ who made the trains run..  Reis was soon Acting Chief Engineer of the Angola Railways.  He also built canals, bought and sold crops and war surplus goods.  In 1922 Reis and family, now richer, returned to Portugal and rented a stylish home in Lisbon. He acquired a US car dealership and set up a company to ship goods to and from Angola.

´fast cheques and slow boats´
Reis´company needed new capital and friends introduced him to the Royal Trans-African Railway Company of Angola (Ambaca).  Reis became very interested in the US$100,000 lying idle in the company accounts and according to Reis, " In the materialistic world ....  there are neither honest men nor rogues - there are only victors and vanquished.  So I had no hesitation in gaining control of the Company and making use of the shareholders´money."    How did a near bankrupt businessman get the capital to buy into Ambaca?  He wrote cheques on his New York bank which took 8 days to cross the Atlantic.  With a few lies and a bit of luck he could wangle up to a month´s free credit.  Reis bought control of Ambaca, made good the US cheques with Ambaca money and also bought control of the South Angola Mining Company. It was at this time that Reis met future accomplices José Bandeira (brother of António, the Portuguese ambassador to the Netherlands), the Dutch financier Karel Marang and the German spy Adolph Hennies. Meanwhile Reis was arrested for embezzling the Ambaca money.   He was released on 27 August 1924 after 54 days´  imprisonment.  The charge of embezzlement had been dropped and he was charged with fraud on one cheque and then released on bail of US$10,000 which he himself raised. While he was in jail, Reis had been thinking..... 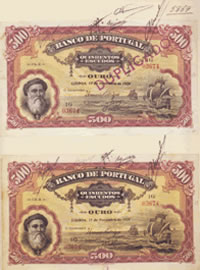 the unique crime - such ingenuity and audacity of conception .........
of the workings of the Bank of Portugal, which issued Portugal´s banknotes and of the fact that the Bank of Portugal had banknotes printed without recording accurately their serial numbers and without informing the Government of the increasing number of notes in circulation. Since Portugal had been off the gold standard since 1891, the only expense involved in issuing notes was the cost of printing them.  He estimated that the issue of 300 million escudos (equivalent to £3,023,889 at the 1925 rate of exchange) would neither alert suspicion nor disrupt the central banking mechanism of the state.

...  and execution
After leaving prison Reis presented himself as the authorised agent of the Bank of Portugal with a mandate to negotiate a massive financing operation in Angola. He was in touch again with Bandeira, Marang and Hennies and with a letter written by Reis but purporting to be from the Chairman of the Bank of Portugal, together they requested the London printing firm, Waterlow and Sons, to honour an existing printing contract as part of an official and secret plan by the Bank of Portugal to provide a loan to Angola in banknotes.  The accomplices provided Waterlows with ´official authorisation´on papel selado  (such as the government used).  Without properly checking the source of this order, Waterlows printed 200,000 of the Vasco de Gama 500 escudo notes using genuine Bank of Portugal plates.  Marang took delivery of the notes in London (leaving them for a while in the left luggage office of Liverpool St station) and despached them to Reis in Lisbon from February 1925 onwards using the diplomatic privileges of a consul of Liberia and laissez-passer from António Bandeira.   Reis hired zangões (freelance currency dealers) to buy hard currency on the black market with the new notes.  Others deposited new notes into accounts in suburban bank branches and subsequently made withdrawals from the head offices of these banks.  Reis then decided to establish his own bank, the Bank of Angola and Metropole,  through which he could dispose of his illicit currency.  He then sought to take control of the Bank of Portugal, the sole institution capable of initiating proceedings against counterfeiters of its bank notes.

crime and punishment
Reis required 45,000 voting shares to gain control of the Bank of Portugal.  By November 1925 he had acquired 10,000 and aroused the suspicions of journalists of the Lisbon newspaper, O Século, which, on 5 December 1925 used the headline, ´ O País em Crise´ to depict an international plot with German spies intent on colonial expansion in Portuguese colonial Africa which provoked an outbreak of rioting.  Although the Bank´s experts had believed that there were counterfeit notes circulating, of course all the 500 escudo notes appeared genuine.  Quite by chance in October, a bank cashier had noticed that he had two identical Vasco da Gama notes, both of which appeared genuine and on 4 December a Bank of Portugal inspector investigating deposits by the Bank of Angola and Metropole had discovered more banknotes with identical serial numbers.  Reis´ forged orders were convincing enough for judges to suspect that Bank of Portugal officials might be involved and the court case was delayed for 5 years.  Reis was finally tried in May 1930 and sentenced to 20 years´ imprisonment.  Although he said that his motivation lay in acquiring sufficient capital to help build up for Portugal ´a great and prosperous Angola´, the court concluded that it was to create a great and prosperous Alves Reis.

fallout
Reis was released in May 1945.  He died a pauper´s death in 1955 as did Hennies and Bandeira in 1957 and 1961 respectively.   Marang was tried in Holland in 1926, sentenced to 11 months´ imprisonment and died a naturalised, wealthy and respected Frenchman in 1960. Sir William Waterlow became Lord Mayor of London in 1929, and the scandal contributed to his early death in 1931. He did not live to see the victory of the Bank of Portugal in the House of Lords in 1932 and the award of £610,392 in damages. Crime writer Edgar Wallace was one member of the public who did see the case.

truth can be stranger than fiction
Reis had illicity injected into the Portuguese money supply an equivalent of £1,007,963.  The escudo lost much of its credibility and the scandal induced a permanent loss of confidence in the First Republic. The inflationary crisis triggered a series of events culminating in the creation of Salazar´s authoritarian Estado Novo in 1932.  Edgar Wallace could not have imagined a novel with such a storyline, and even at this distance, it is impossible not to have some admiration and even liking for a rogue who so nearly succeeded.