"I have an announcement to make to the House arising out the treaty signed between this country and Portugal in the year 1373 between His Majesty King Edward III and King Ferdinand and Queen Eleanor of Portugal,"  declared Winston Churchill in the House of Commons in 1943.

He was invoking the terms of a nearly 600 year old  treaty in his attempt to persuade Dr Salazar to allow Britain to use the Azores as a naval base both for the Battle of the Atlantic and as an air base for the transport of American troops and equipment to North Africa.   The relationship between Portugal and Britain has been called ´The Oldest Alliance´but what has this ´friendship´ meant for the two countries?

The earliest documented evidence of a commercial relationship between Portugal and England is from the 13th century and between 1353 and 1943 a total of 32 treaties and conventions were signed by the two countries for commercial and military  purposes.  In 1842 the Viscount of Santarém in his book  ´Quadro Elementar´wrote that from 1150 to 1500, in treaties made by England, Portugal was always understood to be her ally and confederate.  The treaty signed by Edward III and D. Afonso IV in 1353 allowed English merchants and seafarers to operate on the coast of Portugal and was the beginning of a special friendship - between the English and port wine.  A new treaty in 1654 granted more privileges to English merchants and when the Methuen Treaty of 1703 reduced the English customs duty on Portuguese wine to a level below that of French wine, the port wine trade went from strength to strength, with the exception of one or two hiccoughs! The first hiccough occurred in 1755 when the Marquis of Pombal made Douro wine a government monopoly;  this move forced up the price of wine and outraged the English wine shippers into the bargain.  Pombal told them that if they could no longer make a profit, they should return to England.  They stayed and their successors are still here.

At the beginning of the 19th century William Wilberforce and the Abolitionists had exerted enough pressure to cause Britain to follow Denmark´s lead and to legislate against the slave trade (1807) and slavery itself (1833).   Following Napoleon´s defeat in 1815 and Britain´s continuing military presence in Portugal,  Britain exerted pressure on her ally to follow suit and during the nineteenth century the allies signed seven treaties concerning the suppression of this trade.  Slavery itself was outlawed in Portugal and Portuguese India in 1761, but it was not until 1836 that Portugal legislated similarly for her African colonies, and not until 1889 that Brazil banned the slave trade. Illegal slave trading continued for many years after that.  Between 1808 and 1860, the West Africa Squadron of the Royal Navy seized approximately 1,600 slave ships and liberated 150,000 Africans who were aboard. Action was also taken against African leaders who refused to agree to British treaties to outlaw the trade, for example against "the usurping King of Lagos"who was deposed in 1851. Britain signed Anti-slavery treaties with over 50 African rulers.

From Norman times Portugal and England have had an understanding and have supported each other in times of war - particularly in Portugal´s protracted struggle first against Castile and then against Spain.  There were 200 English archers on Portugal´s side at the victory of Aljubarrota in 1385 - the Portuguese version of Crécy and Agincourt!  Spain continued to be a thorn in Portugal´s side and in his effort to sustain Portugal´s independence after 60 years of Spanish rule D João IV sought any Catholic ally.  Failing in this search, he reluctantly turned to the Protestant regicides in Oliver Cromwell´s English Republic.   D João granted to English traders the right to use their own bibles, to have a Protestant chaplain in Lisbon  and to bury their dead in Portugal.  (Protestants who died in Portugal had always been buried in the sand at low tide since burial was not permitted in Catholic soil).  In the early part of the 19th century, with Portugal suffering three separate French invasions, Britain demanded the major trade concession of being allowed to trade directly with Brazil (thereby hastening Brazilian independence) in return for ensuring the safe removal of the Portuguese court to Brazil and military aid against the French in metropolitan Portugal.  The British military overstayed their welcome by remaining in Portugal long after the French had been defeated and Portuguese restiveness against British military rule led to the outbreak of revolution in 1820.  During the following 31 years of civil war, anti-clerical terror and dictatorship, the British interfered both officially and unofficially and the eventual outcome was a constitutional monarchy based on the British model.

Perfidious Albion and the Scramble for Africa

"I am afraid we shall never get anything out of the Portuguese by negotiation.  They will accept a fait accompli but will never abandon the dogma that Africa belongs to Portugal," said Lord Salisbury.   The Portuguese really believed in their right to Africa because they ´found´it first.  Other European powers perceived commercial  possibilities and also wanted a piece of the ´African cake´.  A mad scramble ensued  with Germany, Belgium, France, Britain and Italy jockeying for position.  At the Berlin Conference of 1884, the Great Powers decided that the acid test was "effective occupation" not "a beautiful trunk-load of historic claims, but no armed strength to make them tell" (Lavradio).  Portugal attempted effectively to occupy her claims across central Southern Africa and the Royal Geographic Society of Portugal drew up the Mapa Cor-de-Rosa (the pink map) to illustrate her claims.  Whereupon the ´oldest ally´, backed by the might of the Royal Navy, presented the Ultimatum of 11 January 1890, demanding that Portugal withdraw from those areas which are now  Zimbabwe and Zambia, which Britain herself claimed.  Portugal had no option but to accept, and signed away her claims on 11 June 1891.  It was perceived in Portugal that the king was unable to protect legitimate Portuguese interests,  and the Ultimatum proved the beginning of the end for the monarchy.  More British perfidy was to follow.  In 1898, desperately short of money, the Portuguese government sought a loan in the London money markets.  Great Britain secretly agreed with Imperial Germany to use Portugal´s empire as surety for this loan, but Portugal borrowed instead from France.  Later, in an attempt to avert imminent conflict with Germany, Britain negotiated secretly for a second time with the Germans over the partition of Portugal’s African territories right up to 4 August 1914, the outbreak of World War 1.

In 1916, the first Republic loyally answered Britain’s call for support in World War 1.  Portugal was brought to her financial knees by this intervention, and lost 7.000 troops in a battle on the River Lys in Flanders on 9 April 1918.  In World War 2, Dr Salazar gave the Allies concessions to use the Azores as an air and naval base in return for safeguarding the Portuguese Empire.  Anti-American as he was, Salazar in 1944 conceded an airbase on the Azores to the US in return for Portuguese support in the liberation of Eastern Timor.  Continued US presence in the Azores after the war guaranteed a place for anti-democratic Portugal on the foundation of NATO.

A last cry for help

In 1954, India overran the small Portuguese enclave of Dadrá  Nagar Haveli. Britain declined to represent Portuguese interests.  In 1961, before the Portuguese overseas province of Goa, Daman and Diu was also overrun by the army and navy of the Indian Union, Portugal, under the provisions of the ancient alliance, asked Britain for permission to use Aden as a staging point for their aircraft.   Britain refused and made the point that Portugal’s alliance with Britain could be invoked only in European or Atlantic affairs.  Portugal lost her Indian possessions:  the breakup of her empire had begun.

Nations invoke alliances only when their security is threatened - the Portuguese required English help during the Castilian Wars and during the French invasions.  Although Britain was cavalier in its treatment of its ´oldest ally´ in 1884 - 1914, Portugal remained faithful in 1899, 1916 and 1943 and was rewarded with  Britain declining to support Portugal over India in the 1950s and 1960s. The contacts with the most profound continuing influence between Portugal and Britain were those concerning trade; those treaties and instructions are among the oldest and longest lasting between any two sovereign nations.  The bilateral arrangements cemented by John Methuen in 1703 have benefitted both countries; the port industry continues to flourish and the long settled British communities in both Lisbon and Oporto have marked the culture of each city.  In terms of the more recent phenomenon of Britons choosing to settle in Portugal - it may not be just the sun and golf - it could be that the ´Oldest Alliance´has become part of our national psyche! 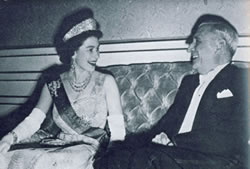 In 1662 D Luísa de Gusmão, widow of D João IV and Regent of Portugal, won the right to recruit mercenaries in England, Scotland and Ireland and to provide them with English armament.   In return she gave her daughter´s hand in marriage to Charles II, with the port cities of Tangier (which Charles II later abandoned), Bombay (which proved important in terms of England’s growing empire) and a promise of a dowry of 2 million pieces of gold.

The Horse that said ´neigh´ to the Prince of Wales

On visiting Portugal on his return from a visit to India in 1876, Edward, Prince of Wales experienced a Portuguese rebellion.  As he sat in the royal carriage waiting to be paraded through the streets,  there was one horse which was not going to move ... `this fine horse who in the face all persuasion, threats, blows, prods from bayonet points and parasols remained inflexibly stationary.  The coachman, the police, the military officials, ordinary citizens and their families all had a try to move him.  They recited to him the law, the police regulations, extracts from patriotic speeches, they praised the monarchical regime, telling him that under it he might become a consul like the horse of Caligula.  They reminded him that he was a public servant, that he must on no account incur the odium of a traitor.  It was no good, he resisted everything, neighing, biting, rearing, tearing his harness.  The only thing was to unharness him and proceed a horse short.  They said it had gone mad.  Senhor Ortigão said that was not true.  He had seen the horse being led quietly home, wearing an expression reflective and composed.  The horse was in full possession of his faculties. He did not draw the prince´s carriage because he did not wish to.  And it seems to me important, John Bull, that among those who triumphantly received His Royal Highness, there was one who protested!

From ´As Farpas, Epistola a John Bull