The Muslim Military Heritage of the Algarve

Within 100 years of the death of Mohammed (570 – 632), the first Muslim Jihad had extended Islamic dominion from the Middle East, across North Africa and over nearly all of the Iberian Peninsula. It is easily assumed that there were no great changes during the Muslim occupation of Iberia, but there were four major ruling elites during the nearly eight centuries of Muslim rule, as well as three periods of breakdown in central authority, under which the independent taifa states flourished.

In 1249, the Algarve, close to Morocco, was the last area of Portugal to fall to the Christian reconquest. Muslim Algarve had been protected not only by its proximity to the Berber coast of North Africa, but also by the system of fortified cities supported by smaller fortlets. The Algarve´s natural defences behind the waterless plains of Lower Alentejo and the hills of the Caldeirão and Monchique played their part in discouraging the Christian invasion.

After the process of Islamic conquest of Iberia (a period of about 40 years) the Islamisation of the indigenous populations was not enforced militarily but depended mainly on commercial influence. There were still Christians living in the Algarve some 400 years later. Indeed when the Christians of Ossonoba changed the name of their city to Santa Maria do Ocidente sometime in the 10th century, the Muslim authorities moved the site of the capital of the Algarve from Ossonoba to Silves. And Al-Idrisi reported that until well into the twelfth century the monastery on Cape St Vincent was allowed to receive Christian pilgrims and the rents from its landed possessions. Only after the capture of Lisbon in 1147 were the remains of Portugal´s original patron saint moved from the Cape to Lisbon (possibly as late as 1173). The coat of arms of the City of Lisbon shows a ship at sea and guarded by two ravens in allusion to the translation of St Vincent´s body from the Cape to Lisbon. Portugal is well blessed with patron saints, also acknowledging St Antony and St George.

The written sources are silent for the first period of Islamic rule in the Algarve which suggests that the Algarve was relatively peaceful at that time. In common with much of western Europe, the Algarve suffered major attacks by Norman forces in the late tenth century, particularly around the approaches to Silves. Silves itself was taken for the first time by D Sancho 1 and the crusaders in 1189 and after its recapture by the Almohad Yakub al-Mansur in 1191, it was more heavily fortified before being lost for a second time in 1240, to D Paio Peres Correia of the Order of Santiago de Espada.

In his book on the Christian Reconquest of the Algarve, António Castro Henriques shows a plan of the Portuguese Algarve and the 23 Muslim fortified places in the province. Many of the forts have completely disappeared: Albufeira, Messines, Algoz, Porches, Carvoeiro, Estômbar, Monchique, Cerro de Altamora, Barrada and Arrifana. Current excavations show that Castelo Belinho was probably a fortified house rather than a fort, and the Muslim origins of the forts of Lagos and Sagres are not clear.

Following the reconquest, many of the captured Muslim fortresses were remodelled along Christian lines. The continuing threat from Castile ensured that Portuguese kings continued to modernise fortresses against Spanish invasion. Changes were made down to the time of D Fernando (1383) and in the early 16th century D Manuel I, was rich enough to make many further changes and additions, particularly in Tavira and Silves. After the Restoration of Portuguese independence in 1640, there were further changes and additions. For example, Muslim Cacela was submerged completely under a 17th century reconstruction. By this time the threat came not only from Castile, but also from the corsairs of the North African Barbary coast.

The direction from which external threats came determined which forts were to be modified. Because the inland forts (built by Muslim soldiers against the Christian threat from the north) were affected by neither the corsair nor the continuing Castilian threats, these were the forts which most nearly resemble the form they had under Muslim rule. The propaganda of the Estado Novo portrayed ancient Portuguese wars and heroes. At the entrance to many of Portugal´s castles and fortresses, there is a stone tablet engraved with the words A história deste castelo foi recordada com gratidão pelos Portuguese de 1940, showing that the restored and living history of Portugal testified to the greatness of the Portuguese imperial dream, and becoming a part of the eight hundredth anniversary of the foundation of the kingdom, and the three hundredth anniversary of the restoration of independence.

Little of what we see nowadays is in its original form. Most of the military monuments have been either lost, or modified to an extent that the original is unrecognisable or ´restored´according to ideas which are now thought to be wrong. For example, it is now thought that Muslim castles had on the outside a yellow ochre render, and during the restoration work of the 1940´s what remained of this render was removed. Much heavy restoration has taken place, and many of the merlons (or battlements) which we see on ancient monuments are clearly rebuilds in modern brick faced with stone; and close study of the stonework near the entrance of the alcáçova in Tavira, for example, reveals differing styles of building and stones of many different colours.

The fortresses which most nearly resemble their Islamic appearance are those at Silves, Aljezur and Paderne. These are the inland buildings which could not be brought to bear on either the corsair or the Castilian threat. The ruins of the eighth century Muslim fort at Alcoutim are without posterior reconstruction and the walls of Niebla are original although the interior is completely rebuilt. Those which have Islamic origins but which are almost totally remodelled are Mértola in the Alentejo and Cacela Velha. 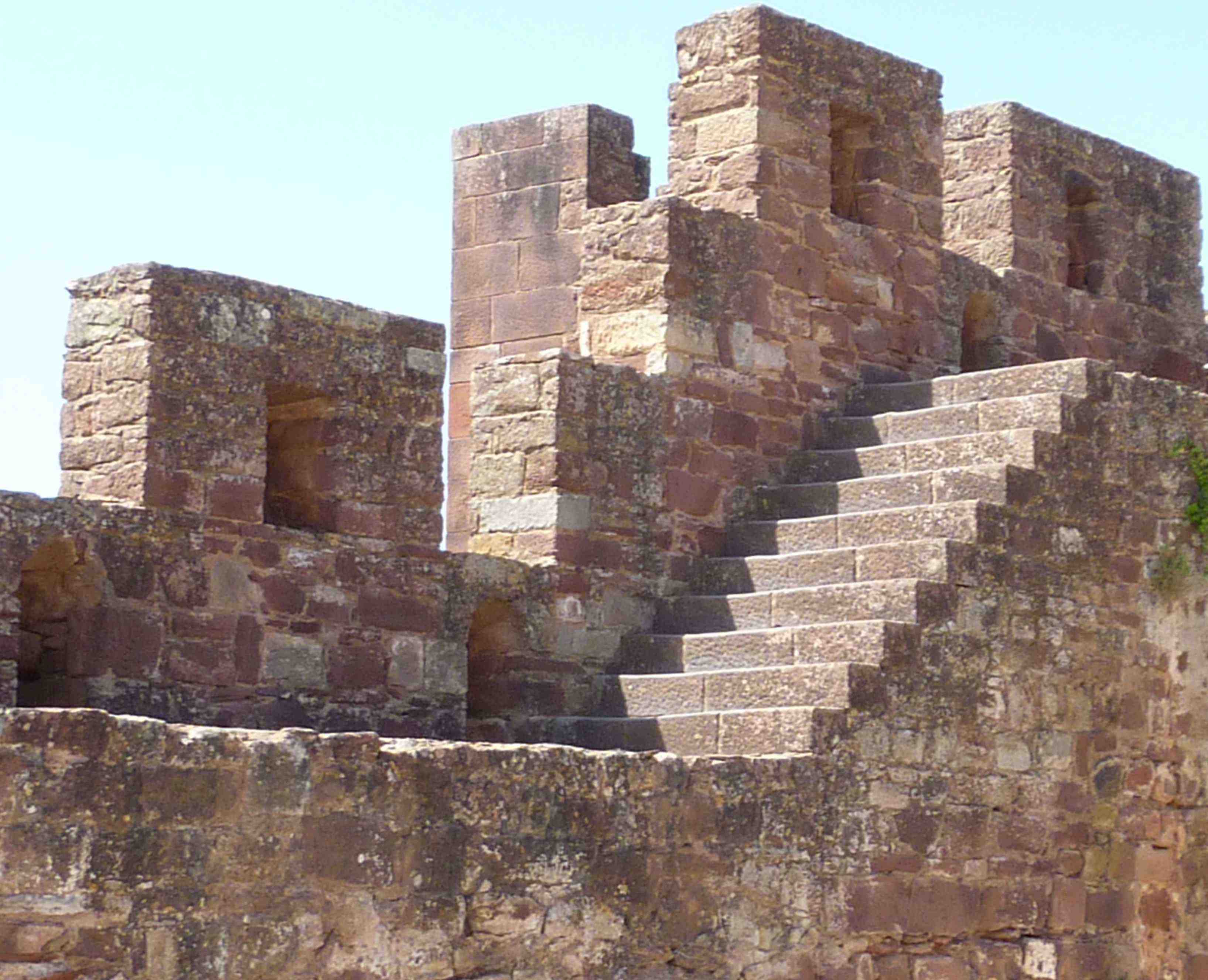 In terms of castle design, the first of the invaders brought their ideas from their fortifications in North Africa. They built in regular quadrangles or rectangles, with massive towers, protected by a ditch or outer wall. The old castle at Alcoutim belongs to this time. It is built with schist and has double walls and square towers. As the Christian reconquest gathered pace in the late twelfth and early thirteenth centuries, new fortresses were erected and new military ideas were employed. The elbow gateways (portões cotovelos), fortified water sources (couraças) and torres albarrãs were introduced. New walls were also built around some of the major settlements.

The torre albarrã (or barbican) was usually a freestanding tower connected with the top of the city walls by a walled passageway. From the top of such a tower the defenders had a greater field of fire for their bows, crossbows, stones and other missiles. A particular advantage was that defenders could target those attackers sheltering at the foot of the castle wall, who might also be mining underneath it. The torre albarrã is evident at Silves, Paderne and Loulé, and there are vestiges of two such towers against the Muslim walls at Tavira.

Another Muslim feature was the cotovelo gateway as seen at Paderne, Mértola and Aljezur. The idea of the elbow bend was to reduce the impetus of any successful incursion, as the attackers would have to slow down to negotiate the bend; they would then become easier targets for the defenders atop the walls.

For a building material, the Almohad builders of the twelfth century used taipa militar as well as stone. Taipa militar is a mixture of damp earth, sand and lime which was filled between coffer boarding in layers of 10cm and then compressed by hammer and muscle power. The materials were readily available in many locations. When dry taipa militar hardened as a strong outer wall, it had the appearance of stone or even concrete. Examples of the use of taipa militar include the towers at Salir (the walls have unfortunately disappeared), the walls and torres albarrãs at Paderne and Silves and the outer wall at Niebla. The reconstruction in 2006 of parts of the fortress at Paderne may be seen from the Via do Infante, and are especially visible at night when the castle is illuminated. The “new” taipa militar may be observed juxtaposed to the surviving taipa militar from the twelfth century. The new has the outward appearance of yellow cast concrete, while the original shows the effects eight centuries of weathering. The fact that it stands at all demonstrates that it was a robust material for building fortifications.

Although the towns of Loulé and Faro still have elements of Muslim construction, much has succumbed to the pressures of modern development ( for example, in 1923 a road was driven through two of the walls of the Muslim alcáçova at Faro) and the walls of Christian Tavira doubled the size of the original Muslim town.

Under Muslim rule, the Algarve had three capitals. First Ossonoba, then Silves and finally Niebla. Each retains important traces of its Muslim past, and the fact that so much survives after eight centuries shows that the Muslim builders of fortresses were exceptionally good at their work.