Land of blistering hot sunny days, miles of golden sand and oasis upon oasis of verdant golf courses. The Algarve is indeed a perfect place to relax.  It is also a magnificent area to explore:  Romans, Moors, Crusaders, pirates, explorers.  Here are some ideas for your voyage of discovery!

Starting in the Eastern Algarve on the right bank of the River Guadiana, the border with Spain, is Vila Real de Santo António, the ´City of Enlightenment´, so called because it was 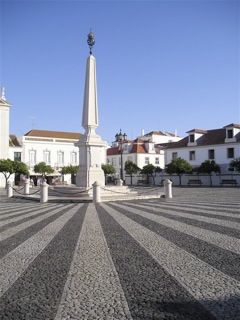 constructed in the famous grid pattern design during the late 18th century.

The focus of the town is the magnificent orange-tree lined, Praça Marquês de Pombal, named after the eponymous Marquis who was responsible for the design of the earthquake damaged areas of Lisbon.  If you have time, take a ferry across the Guadiana to visit Ayamonte. Very Spanish, very beautiful, very different and once a part of Portugal.

Further north on the river is Castro Marim which grew as a port servicing the ships that brought copper from Alcoutim and Mértola further upstream. To defend the Algarve from the Spanish to the east, D Afonso III built a massive castle which became headquarters of the Order of Christ for 35 years.  The town´s importance declined until D João I in 1421 revived Castro Marim´s profile by granting it the privilege of being a sanctuary for fugitives and wanted men!

En route westwards the fort in the small village of Cacela Velha was built to deter the Barbary Corsairs who terrorised the southern coast of Portugal for nearly 300 years. The fort now is headquarters of the local GNR (Guarda Nacional Republicana)  who are looking out for present day smugglers.

Further west the privately owned fort of São João da Barra in Cabanas is now used for bed and breakfast, and the Forte de Rato in Tavira was landlocked by the shifting sands of the Atlantic coast long before it was finished. Described as the prettiest city in the Algarve, Tavira has been home to Phoenicians, Romans, Moors and now many Northern European settlers.  The Romans built a large town, Balsa, to the west of Tavira.  Unfortunately fifty years ago there was no will to conserve the Roman town and many of the ruins, allegedly, have been used as  infill on the EN125 road.

Tavira was an important base for the conquest and supply of Portugal´s North African garrison towns.  The town´s fortunes declined as the river silted up but at the end of the 18th century Tavira became a main port for tuna fishing - fishermen were able to catch some of the fish as they migrated towards the Mediterranean to spawn, and to catch others on the way out again after they had spawned.

There is a Tuna Museum in the Vila Galé Albacora hotel to the east of Tavira.  At Barril Beach near Santa Luzia to the west of Tavira is the anchor graveyard:  when the industry declined in the 1960s hundreds of anchors used for holding the enormous tuna nets were buried in the sand next to the old tuna fisherman´s village.

In quirky Olhão the two oldest quarters of the town have the exotic white cubist housing that is unique in Europe. The houses are similar to those in North Africa but they have a few unusual modifications: verandas and roof terraces. After the victory over the invading French in June 1808, fishermen from Olhão sailed in the Bom Sucesso to inform the Prince Regent in exile in Rio de Janeiro.  He rewarded them by naming their town Vila de Olhão da Restauração.

The old Roman port of Ossónoba became the capital of the Algarve under its Portuguese name of Faro.  It became a city in 1540 and was sacked by the English under the Earl of Essex in 1596 who stole books from the Bishop´s Library (the books are still in the Ashmolean Library in Oxford).

The city is a haven for culture vultures:  the Algarve Regional Museum and the Archaeological Museum;  city walls built by Romans and Byzantines; the Italian designed Arco da Vila  with its unique horseshoe gate; many churches including a cathedral from the tower of which you may observe at close quarters passenger jets about to land at the airport, and the Carmo Church with its haunting Chapel of Bones; the Mouraria; the Jewish quarter and the Jewish Cemetery; the Episcopal Palace and if you have time to spend the evening here then the Teatro Lethes (modelled in the style of La Scala) or the modern Teatro das Figuras are well worth visiting.

From here, rather than following the coast, you can take a detour inland to Loulé - on a quick visit here you can see the home and the monument to the man who changed the face of Portugal - Duarte Pacheco.  The monument at the top of the Avenida 25 de Abril reflects Pacheco´s commitment to modernising the built environment of Salazar´s Portugal.  There is another castle to visit here but if you want to go down rather than up, visits can be made to Loulé´s salt mine - huge galleries from 230 to 270 metres below ground which sometimes host art exhibitions. 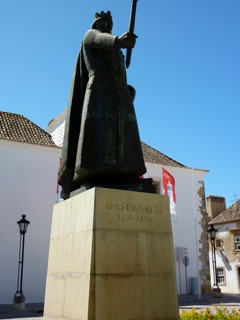 Travelling again westwards you may reach Silves (with its magnificent Moorish castle), which prospered as the capital of the Moorish Al-gharb:  it became a cultural centre of poets, chroniclers and lawmakers.  D Sancho I with his crusaders reconquered the city for Portugal, but it was not until 1242 that Silves was finally reclaimed by the Christians. D Afonso III could then justifiably take the title of King of Portugal and the Algarve.

The Municipal Museum in Portimão makes good use of an old canning factory and nearby is the Museum-home of a former President of Portugal. Manuel Teixeira Gomes was a businessman, painter, author and diplomat.  Under pressure from his friends, he agreed to stand for the Presidency, and was promptly betrayed by them.  His grave is in the municipal cemetery.

Like Tavira, Lagos benefitted from its position, and the ships which set off from Lagos on the voyages of discovery returned with ivory, gold, silver and slaves.  Rich merchants came to live here and much wealth was poured into building churches and houses - many of which were lost in the earthquake and tsunamis of 1755.  Visit the Slave market and the chapel where King D Sebastião heard mass before setting off for the fatal battle of Alcácer Quibir in Morocco. In Praça Gil Eanes, you may see João Cutileiro´s infamous sculpture which makes D Sebastião more of a Ziggy Stardust than a monarch.  It is rumoured that he will return and when he does Portugal´s fortunes will wax again.

Portugal´s most famous son, Prince Henry the Navigator, is famed for his connection with Sagres where he called his house World´s End.  Henry died before he could take up residence there.  Off land´s end, Cape St Vincent, around 1800 there were three naval battles in the space of fifty years, and the monks in the monastery had a ringside seat!