Tavira is sometimes known as ´The Venice of the South´.  The township has existed in three different locations for reasons of security and because of the silting up of the river. Through time, Tavira has suffered various waves of fortune:  following the destruction of Balsa - the Roman Tavira - over the last 30 years, it would now seem that the tide has turned ....

The origins of the city of Tavira date from the Late Bronze Age (8th century BC) when Tavira, Cadiz and other coastal locations in the Iberian peninsula became major Phoenician settlements.  The old centre of Tavira stands on what was then a peninsula, and the Phoenicians created around it two harbours, temples and massive town walls. These were double walls with rounded towers at regular intervals and the outer wall was faced in a yellow-green clay-based plaster, similar to that found at Cadiz and other Phoenician settlements. Phoenician Tavira lasted until the end of the the 6th century BC and the town itself was abandoned around 300 BC  for a site on a hill known as Cerro do Cavaco 3 km to the north. The Roman town of Balsa was a harbour and urban centre 7 km to the west of modern Tavira.  It played a major role in Pompey the Great´s war against the pirates in the mid first century BC and Balsa later became one of the larger towns in Roman Lusitania. The original town location and site of modern Tavira became merely a crossing place where the River Gilão was forded on the route between Castro Marim (Baesuris) and Balsa.

For over 1300 years, there was no great urbanisation on the banks of the River Gilão and after the Islamic invasions of 711 the rural district of Tavira became part of the Califat of Córdoba. There was a village on the left bank known as Al-jillah (which is the probable origin of the name Gilão).  It was only at the millenium that the Almoravid castle was built on the right bank of the Gilão to protect the ford where ´The Roman Bridge ´stands today.  What we know of the activity in the port of Tavira in the mid 11th century shows that Tabira (meaning "the hidden") was one of the main settlements of the Islamic Al Garb.

The Christian reconquest of the North of Iberia displaced thousands of muslims southwards and with the influx of refugees the town spread down towards the river.  The area between the castle and the river became wealthy and it was at this time that the famous ´Tavira Vase´ was made.

During the period of Almoravid decline, small independent kingdoms (taifas) emerged and Tavira became a taifa whose prosperity was based on commerce and piracy.  Iberia suffered its second Moorish invasion when the Almohads, a religious fundamentalist sect, sought to re-establish the practice of pure Islam in the peninsula and the taifas - Tavira among them - had to defend themselves against the new religious fanatics. Their defensive measures included a wall 4 m thick and 10 m tall on the northwest side of the area we know as Praça da Liberdade in front of the present day town hall. The outward faces of the new town walls were also covered in yellow plaster, but different from the Phoenician decoration. Many houses were pulled down to create space for these massive defensive works. The Almohads were determined to deal with this "land of pirates infidels and renegades", and in 1167/8 Tavira was one of the last of the taifas to fall to Almohad forces. Over the next 80 years, the new regime added further defences against the coming Christian reconquest.

The Christians reconquered Tavira in 1242 when D Paio Peres Correia, infuriated at the murder of seven of his knights in a Moslem ambush, attacked the town.  Taviras importance was based on its privileged location as a port and in 1282 D Dinis bestowed rights and privileges equal to those of Lisbon on the alcaide (mayor) and seamen of Tavira.  When the war against the Moors moved to North Africa, Tavira played an important part in supporting Portugal´s forces in their Moroccan conquests and in the effort to reduce piracy along the coast from Cape St Vincent to the Straits of Gibraltar.  When D João I returned to Portugal after the conquest of Ceuta in 1415, he landed at Tavira, where he knighted both Infantes D Pedro and D Henrique after their outstanding performances at Ceuta.  So long as Portugal retained its outposts in Morocco, Tavira remained important. In 1577 Frei São José wrote: ´Tavira is the principal territory in the Algarve, since it served as the starting point of all ships for the journeying of passengers and merchandise which came from the countryside, such as honey, wax, leather, dried fish, dates, horses and cattle´. These exports to North Africa and the campaigns for conquest, as well as the armações  (tuna fish traps) brought about great prosperity. With the decline of Portugal´s interest in Morocco and the silting up of the Gilão at the end of the 16th century, Tavira´s prosperity became founded in the traditional tuna fishing activity as well as exports of dried fruits and wine.

Perils from the sea

Economic well being attracted pirates and corsairs.  Frei João said that ´the people in Tavira lived in instability and fear´.  The residents of Tavira  ´kept watch all day and all night with their foot in the stirrup and their lance in their hand´.  These corsairs were continually incited by religious chiefs into attacking Christians in North Africa and Southern Iberia, mainly through hit and run raids; they were named Barbary corsairs after the Barbary (North African) coast where they had their bases.  A series of watchtowers (atalaias) was built along the Algarve coast as an early warning system for the defensive force of caravels to attempt to repel these muslim pirates.  Old structures were modified as part of the defensive system and new fortresses were built.  The Torre de Lastão was built near Quatro Águas, the Forte da Ilha das Lebres (Forte do Rato) near the present Vila Galé Albacora and later, as the entrance to the river moved further east, Forte de São João da Barra at Cabanas.  These new fortifications did not always prove effective.  In 1648 a corsair brazenly pursued a caravel inside the lagoon at Cabanas and became grounded right in front of Forte de São João.  The garrison was alerted only when a Portuguese captive escaped from the corsair ship and ran up to knock on the door!  Of the long line of defensive structures on Tavira´s coast only three survive today:  the Torre d´Aires, Forte do Rato and Forte de São João.

The Forte de São João, constructed between 1640 - 56, was extended in 1670; after the 1755 earthquake it was rebuilt and continues today as one of the best preserved of the military structures in the Algarve. With the changes in coastal geography, this fortress was no longer effective and became a customs post, before being sold off to a private individual.  Forte de São João is still privately owned and above the sturdy complete fortress walls can be seen the roof of a modern house, complete with TV aerial and solar panel!

In modern times, Tavira was one of the seats of the Governor and Captain General of the Algarve and when the 1755 earthquake destroyed his other headquarters in Lagos, the then Governor was instructed to move his base to Tavira.  He took up residence in the Alto de Santa Ana (in the present GNR stables and Radio Gilão building) and extended the hermitage of Santa Ana for use as his chapel.  The Governor´s base was maintained in Tavira until it moved to Faro in 1834.  After 1780 when Tavira had become the military centre of the Algarve, it clearly needed a hospital and the Old Military Hospital was begun in 1761. From 1787 it was a centre of surgical instruction by doctors sent by  the royal edict.  After serving also as a barracks, in 1953 this beautiful and serviceable building became a mess for officers and sergeants. The Atalaia Barracks, one of the oldest purpose built barracks in the country, was begun in 1795 as home to the Faro Infantry Regiment which transferred to Tavira in 1780.  Building work was interrupted by the French Invasions and the ensuing civil wars and later cholera outbreaks delayed its recommencement until 1856.  Soldiers were meanwhile billeted on private citizens and after the closure of the religious houses in 1834, the Convento de Nossa Senhora da Graça (from 2007 a prestigious pousada) became a barrack. The ground which today contains the pousada´s swimming pool was used within the last 30 years as a military shooting range. It was not however until the beginning of the 20th century that the garrison moved into the new Atalaia barracks.   The rapid increase in the size of the army during the African Wars (1961-74) saw major expansion of the barracks, which was halted only after the Carnation Revolution.  From 1996 the Atalaia barracks has been a holiday centre for military personnel. The main façade of the building is so similar to the central buildings of Vila Real de Santo António (constructed 1775-7), that it is believed that same architect, José Sande de Vasconcelos, might have been involved in the designs of both.

The (not so) Roman Bridge

No sources confirm the existence of a bridge in Roman times but there was a bridge in Tavira in the 13th century at the time of the Christian reconquest.  In the Castilian War of 1383-1385, the bridge was the battleground on which citizens of Tavira helped to defeat forces of the King of Castile. Up to the 17th century the bridge was cruciform and like many medieval bridges had houses built on it.  It collapsed in 1655 and was rebuilt as we see it today with seven arches.  At that time Portugal was at war with Spain (1640-68 - The War of the Restoration) and as the bridge was important to the war effort it was rebuilt quickly through the services of royal architects Mateus do Couto and Pedro de Santa Colomba, and with the money and labour of the citizens of Tavira.  The bridge was connected to the medieval wall by means of an arcade connected to the guardhouse and the powder magazine, both of which were demolished in the 1880s. The bridge collapsed a second time in the flood of 3 December 1989 when 2 arches and a breakwater were washed away, and the rebuilding was completed only at the end of 1992 . 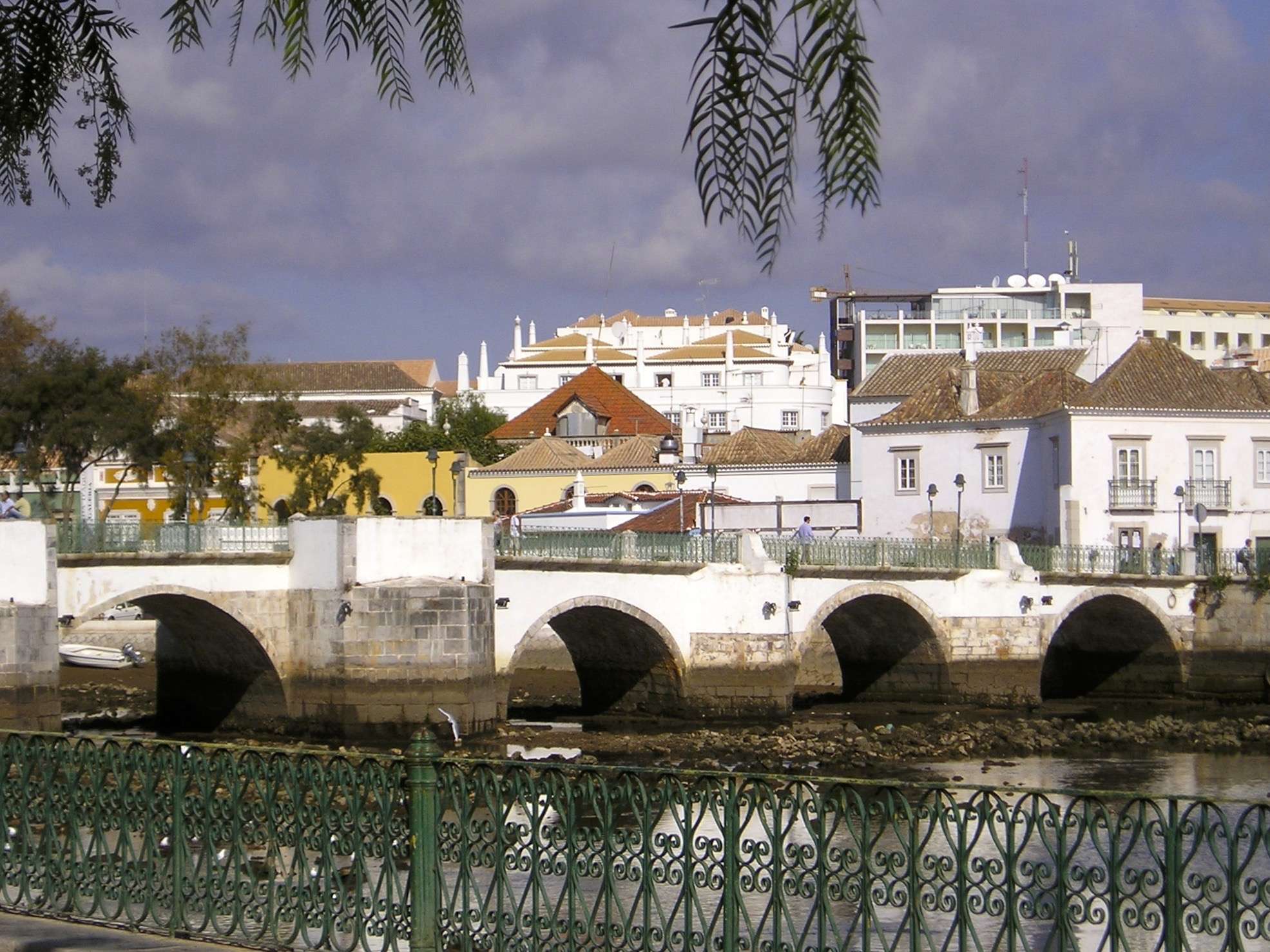 Fortifications of Tavira - the tourist imperative

Whilst many of the architectural remains of the Roman City of Balsa have tragically been destroyed over the last 30 years, the architectural and archeological heritage of Tavira is being preserved and restored as an important part of Portugal´s heritage as well as being a major attraction for tourists.