A CAPITAL DAY OUT

Two of the aims of the Algarve History Association are to conduct research on Portuguese history and to put together a photographic archive. On my second visit to the story of the Marquês de Pombal, I wanted to review my earlier ideas and also look at how the Portuguese themselves saw the man. We decided that we should visit the man himself on his monument at the top of the Avenida da Liberdade.

Metaphorically speaking the Marques de Pombal is now isolated. The underground access to the statue in Praça Marquês de Pombal has been sealed off and the only way to get close to him is to run the gauntlet of 4 lanes of traffic on one of Lisbon´s busiest roundabouts. Needless to say we were the only ones there. 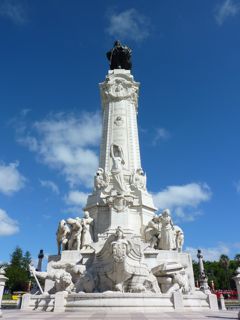 Pombal´s statue looks down on much of Lisbon from the heights of a position just south of the Parque Eduardo VII. The statue was inaugurated in 1934 and reflects his work creating a new Lisbon out of the debris of the earthquake. I was really intent on finding the rest of the story as told by this monument. It is fashionable nowadays to sneer at figurative art, but this monument and the history of its erection is a story in itself. It is located on the Rotunda from which the revolutionaries of 1910 aimed their cannon down the Avenida. In those days the Rotunda was near the edge of the city. It took 30 minutes to capture all of the angles of the monument or perhaps it took Lynne that long to gather enough courage to risk life and limb to get off of Pombal´s island. Perhaps he has been marooned there on purpose.

We always enjoy the walk down the leafy Avenida da Liberdade towards the city centre. Each time we find more statues hidden under the trees. Our finds this time were the monument to the Grande Guerra, Pinheiro Chagas and Simon Bolivar. It is always diverting to reflect upon the values of the city planners.

Our day out was not just to help with planning my forthcoming talk but to explore some of the outstanding features of past presentations. Ron Thomson certainly stirred our imagination with his talk on the church of São Roque. Classically plain and majestic on the outside and a riot of colour and decoration on the inside. The Chapel of São João Baptista is being restored and so we were not able to view the most expensive side chapel in the world. Which means of course another visit at a later date. 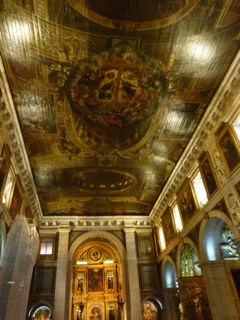 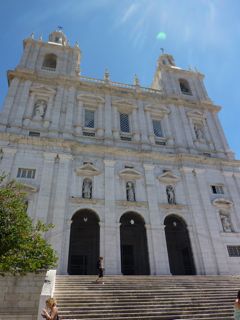 Lynne and I had promised ourselves a visit to the churches of São Vicente da Fora and Santa Engrácia. My presentation on the Philippine heritage in Portugal had shown us more lacunae in our explorations of Lisbon. São Vicente da Fora is built in the estilo chão both inside and outside. Inside the church, the symmetry and lack of colour are very impressive indeed; the walls and barrel ceiling have been built of a grey stone which looks to the modern eye like formed cement. The source of light behind the altar gives a heavenly glow bringing an atmosphere of calm and the altar appears to float in the light. The monastery had been rendered in white and the cloisters were breathtaking in their new cleanliness. The white was complemented by the brilliant blue of the sky above and the blue and white of the ubiquitous azulejos. The roof of the chuch and monastery, the outside of both, the inside of the church and lastly the inside of the monastery had been renovated by a team of 20 workers over four years; they are now very close to finishing. The security man volunteered that if the building were still under state control, it would not have been restored and that it is church funds that have brought São Vicente back to its full glory. There is at present an exhibition of the history of the Patriarchate of Lisbon; the title of Patriarch was awarded to the Archbishop of Lisbon in 1716. The old refectory houses the Pantheon of the House of Bragança and contains three dozen slab sided tombs and the Chapter House contains the tombs of the Patriarchs. If you have not visited São Vicente, we can highly recommend it, particularly so soon after it has been cleaned and restored as never before. 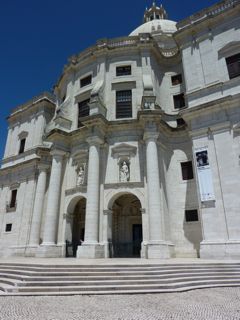 Close by is the National Pantheon of Santa Engrácia which contains memorials to Vasco da Gama, Nun´Álvares Pereira, Infante D Henrique, Pedro Álvares Cabral, Luís de Camões and Afonso de Albuquerque and the tombs of three Presidents, three writers, Amália Rodrigues and Humberto Delgado. Santa Engrácia took nearly 300 years to build (1685 – 1966) and obras de Santa Engrácia is a saying in Portuguese which indicates something which will never be finished.  The Church is in the form of a Greek Orthodox building with four arms of equal length; it has curved walls and a semi-circular cupola.  The interior is covered with inlaid marble.  It is possible to get up to the terrace for a view of Eastern Lisbon and the river.  It was extremely windy at that elevation, and I was told that the summer in Lisbon is a season of strong winds, whereas the winter is not. The National Pantheon is another building which I would recommend to the interested sightseer.

Our journey to the capital was not just about sightseeing; it was about how we travelled the hilly topography of this magnificent city. Near the Rossio we took the funicular of Glória up the short but steep slope to Rua São Pedro de Alcântara to reach São Roque. We passed the headquarters of the GNR, made famous by the cameo part it played during the Carnation Revolution. Returning to the Pombaline baixa, we descended the 30 m by the cast iron structure which houses the wooden and brass lift at Santa Justa and emerged at Rua de Ouro. The lift was opened in 1901 and was originally powered by steam but by electricity from 1907. It retains its Edwardian grandeur.

Number 28 tram heading for Graça took us crammed sardine fashion up to São Vicente and Santa Engrácia. We planned to return on the number 28 but a carelessly parked car made the road impassable for the tram. A whole line of trams behind showed that it was going to be a long wait before line no 28 was back in service. A short walk along Calçada Santo André and the Rua dos Cavaleiros took us north of the castle to Martim Moniz and to Praça da Figueira and Restauradores for a beer and some people watching before taking the metro back to Entrecampos and our return to the Algarve. Indeed a capital day out.