Manueline architecture, the power and the glory

The intricacy and vibrancy of the art is one of Portugal’s trademarks and examples may be found in many forms throughout the mainland and in Madeira, the Azores, Morocco, the Canaries, São Tomé and in the Manueline fortresses in India (Ormuz, Baçaim, Goa and Cochim).

The term `Manueline´was coined in 1842 by Francisco Adolfo de Varnhagen, Visconde de Porto Seguro in the Académia Brasileira de Letras.  The term describes the Portuguese contribution to the European Gothic style. Brazil was not ready in the 16th century to accept proper Manueline architecture, but abounds in 19th century neo Manueline. 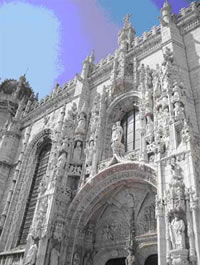 The accession to the throne in 1495 of D Manuel, Duke of Beja, was as miraculous as the architecture that bears his name.  He was the ninth and youngest child of D Fernando, who  was Duke of Beja and brother to D Afonso V (1438 - 1481).  The only son of D João II was killed in a horse-riding accident,  D João II himself stabbed to death his own cousin D Manuel´s older brother, and D Manuel became the sole surviving heir.  No wonder that D Manuel was called O Venturoso (the Fortunate)!

D João II bestowed on his heir D Manuel I his own personal device of the armillary sphere - a model of the movements of the sun and the planets.  One of the distinguishing features of Manueline art is the presence of this sphere, and any building bearing this symbol in stone is indubitably Manueline.  Another is the Cross of the Order of Christ and others are heraldic symbols and ropes represented in stone.  The Manueline style lasted from 1495 to about 1535.

As D Manuel became more prosperous with the new spice trade, he commissioned more and more buildings.  The sudden requirement for expert stonemasons could be satisfied only from abroad and the builders came from all Europe to work for Iberian master masons, such as the brothers Arruda (Tomar, Torre de Belém); the Fernandes (Batalha); the French Boytac (Batalha, Coimbra, Jerónimos) and the Biscayan Juan del Castillo (Tomar).

Noble and rich families followed their royal master and the building works which they commissioned were financed by the profits of the expanding spice trade.  While noble patrons often paid to beautify the chancel and sacristy of a church, the nave was the part used by the common people and it was their responsibility to decorate it.  This fact illustrates why some churches were unevenly developed.  The demand for the new Manueline adornment was such that many of the masons were either inexpert or tyros.  The resulting stonework was often vernacular and ingenuous in contrast to the splendid national treasures at Belém, Batalha and Tomar.

Despite the immense losses occasioned by the earthquakes of 1531, 1719, 1722 and most famously 1755, we still have many buildings from the Manueline period.  The most famous examples of the style are:  the Mosteiro dos Jerónimos, Belém; the Torre de Belém; the Royal Cloister and Capelas Imperfeitas, Batalha; and parts of the Convento de Cristo in Tomar. 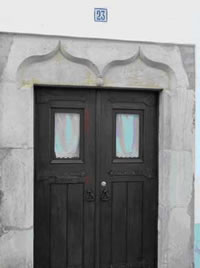 At the time of D Manuel I, Lisbon became one of the most important cities in Europe and was the link between the old continent and the recently ´discovered´ territories of the east.  No wonder that the king wanted to showcase Portuguese regal power in the form of the Mosteiro dos Jerónimos.  The south door of the Monastery has been described as a jewel in Portuguese 16th century architecture.  There is a profusion of images and decorative motifs on a scale without parallel in Portuguese art of that period.  It celebrates Our Lady of Bethlehem attended by the Apostles, Sybils and Evangelists and includes on the central pillar the emblematic figure of Prince Henry the Navigator, the  founder of a chapel on the site.  Vasco da Gama had prayed at this chapel before he set out on his great voyage in 1497 and on his safe return D Manuel ordered the present monastery to be founded there.  The double arcade of the cloister has been described as architecture as theatre with ropes and anchors abounding.  The symbolism in the stonework of Portugal at its greatest is quite breathtaking.

The Torre de Belém is contemporary with the Mosteiro dos Jerónimos and many masons worked on both buildings.  The Torre was designed as the northern part of the defence system of the riverTejo, and although commissioned by D João II, it was not started until 1514, 19 years after his death.  Built upon a basalt outcrop and surrounded by the waters of the Tejo, by the 19th century the Torre had been joined to the north shore by the effects of silting.  The style of the Torre is unique, and it has become a metonym for the city of Lisbon and even for Portugal itself.   The cylindrical shape of the watchposts  is characteristically Portuguese, although the 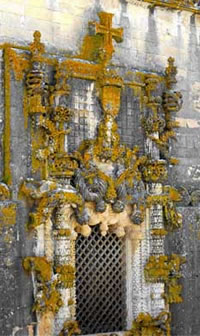 parachute decoration is Manueline.  Natural and heraldic devices include a rhinoceros (on the underside of one of the watchtowers).  The real rhino was brought from India by sea to Lisbon where it was pitted against an elephant.  It was sent by sea as a present to Pope Leo X in 1515.

The Mosteiro de Santa Maria de Vitória da Batalha was commissioned by D João I to commemorate the glorious Portuguese victory over Castile at Aljubarrota in 1385.  The church became the national pantheon of Portugal, a symbol of the victory of the new dynasty of Aviz and most of its architecture is in the Rayonnant, Perpendicular and Flamboyant Gothic of the 15th century. The main glory of Batalha is the huge octagon with seven octagonal chapels beyond the east end of the Mosteiro itself. This ambitious project begun by D Duarte (1433 – 1438) was never finished and is now known as the Capelas Imperfeitas (the unfinished chapels) and it is the portal leading into the Unfinished Chapels which was designed in the Manueline style.  On his visit there Sacheverell Sitwell likened the Capelas to a great Indian gateway go an empty city: unparalleled in fantasy.  The cloisters of this monastery were designed by Mateus Fernandes, who introduced the lush foliate Manueline decoration in the traceries of the Royal Cloister.

Last, but not least in this wild explosion of Portugal´s major Manueline treasures  is the Convento do Cristo in Tomar.  Prince Henry the Navigator became the administrator of the Order in 1420 and he used its resources to launch his expeditions.  The refurbishment of the complex at Tomar reflected the new found wealth and success of   Henry´s explorations and it is now one of Portugal´s world heritage sites.  The buildings marry the architectural and artistic styles of several centuries and not surprisingly Tomar´s most famous window is Manueline.  The window in the south wall of the nave is probably Portugal´s most striking piece of Manueline architecture.  It consists of a plethora of maritime motifs gathered around coral encrusted ´masts´and rising from the carved roots of a cork tree, with rope motifs abounding. 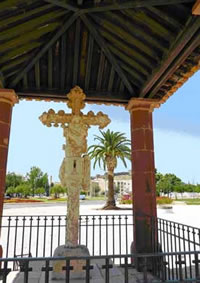 At the base is the old man of the sea and topping the window is D Manuel´s armillary sphere and the cross of the Order of Christ.  Once termed the most stupendous creation of all times, this window has been used as  yet another metonym for Portugal.

Other Manueline architecture in Portugal may not match the scale of those in Lisbon, Tomar and Batalha but you don´t have to be a expert to feel the excitement of finding other examples of this unique style.

Remarkably little remains in the Algarve of the exuberant architecture of D Manuel, mostly because of the damage done by earthquakes.  The doorways of the Convento Bernardas in Tavira, of the Church in Luz de Tavira and of the Igreja da Misericórdia in Loulé are public examples and the Manueline Cross in Silves is one of the best preserved in Portugal.  The Igreja do Divino Salvador in Alvor is one of the few Manueline buildings in the Algarve which remains intact and its west doorway has the most complex design in the region.

In the Alentejo there are a number of fascinating Manueline trails.  The ´white towns ´of Alvito, Vidigueira, Viana do Alentejo, Beja, Serpa and Moura lead on to delights of Manueline doorways, castles and churches and it is even possible to stay in some of them.  The pousadas at Alvito, Évora,  Beja and Arraiolos  have magnificent Manueline features as well as comfort and luxury!  Évora, Arraiolos and Montemor-o-Novo in the Alentejo all have special Manueline treasures.  Évora is of course a UNESCO World Heritage site. The Manueline style is evident in the Paço Real, the Church of the Convent of São Francisco, the Convent of Lóios (the pousada) and the Convento da Nossa Senhora do Espinheiro. 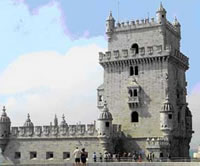 Entering the convent church (Nossa Senhora da Assunção). in Arraiolos through a typical Manueline doorway, there opens out a feast of azulejos.  Moving on to Montemor-o-Novo (definitely a must visit), the coat of arms of D Manuel I is discernable on the guardhouse at the Porta de Vila.  The pyramid-shaped top of the clocktower is a typical Manueline style used in the Alentejo.  Inside the castle is the Church of São Tiago which has Manueline features and which has recently been restored as a small museum.

The Manueline:  Portuguese Art During the Great Discoveries was published by Museum With No  Frontiers in 2002, and is available in English.  For any explorers in search of Manueline art it is an invaluable vade mecum.  The guide reveals the locations of examples of Manueline art forms other than architecture and the authors put the Manueline phenomenon within its true historical context.   If you plan your own voyage of discovery or just an ´armchair tour´, it is an indispensable guide.