Entry into the ideal military city of Estremoz involves squeezing the car through a narrow gateway flanked by well preserved walls and then manoeuvring through tiny streets with sharp bends and sudden one-way systems. 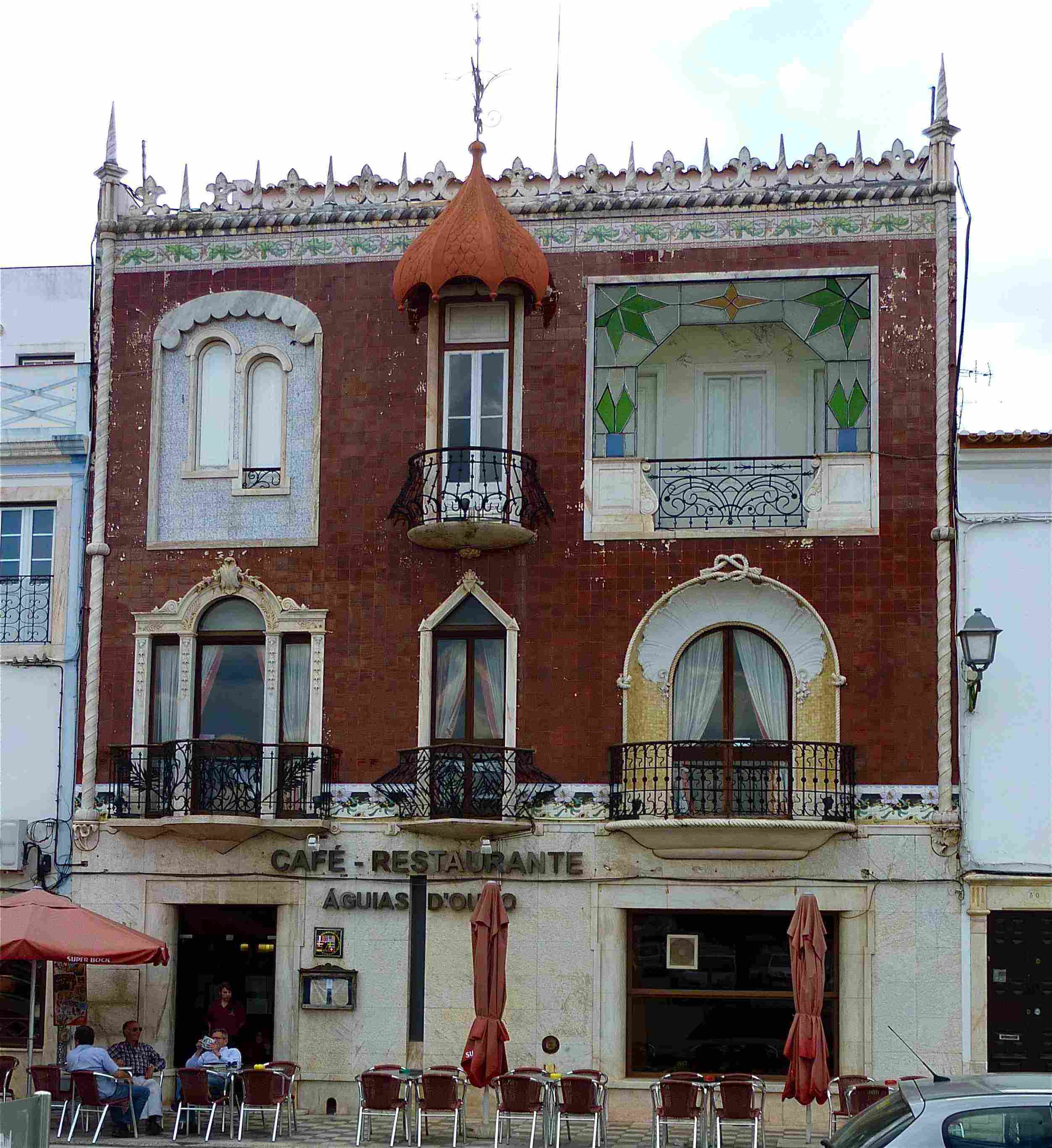 All the more of a contrast to arrive in a huge central square (Rossio Marquês de Pombal) whose size reflects the open and flowing plains of the Alentejo. This massive square is lined by cafés and magnificent and historic buildings such as the old 17th century Convent of the Congregados (now used as the town hall) with its amazing azulejos on the broad sweeping staircases.  Even more surprising, we found that the magnificent Rossio Marquês de Pombal is also a wi-fi zone.

The area around Estremoz has been inhabited since palaeolithic times and there are the remains of a Roman period villa in the village of Santa Vitória do Ameixial.  But it was not until some time after the Christian Reconquest of this area from its Moorish occupants that the town of Estremoz received its first charter in 1258 from D Afonso III, who ordered the building of the castle. There is a breathtaking view of the town from the top of castle keep, the Tower of the Three Crowns, (it was constructed during the reigns of D Afonso III, D Dinis and D Afonso IV) to a height of 27 metres. The tower has three floors: the first is dark and must have been a prison; the second the royal audience chamber; the third has machicolations (holes for pouring missiles or boiling liquid on attackers); and its battlements are  almost all restorations from 1940. The town wall once had 22 towers and enclosed enough space for a population which required twenty cisternas for their water.

On 4 July, 1336 Estremoz earned undying fame as the location of the final days and death from a summer fever of the Sainted Queen, D Isabel, the queen of peace, the dowager queen of D Diniz. In 1323 at Alvalade, she had prevented a battle between the armies of her husband and their son, Crown Prince D Afonso.  She rode a mule between the two armies, and her obvious and overwhelming grief and distress erected a barrier that no-one would cross, and differences were peacefully resolved. In 1336, at the age of 65 she had travelled from Coimbra in the summer heat for a meeting with her son, D Afonso IV, in a successful attempt to prevent war with Castile.  Having involuntarily endowed fame on the city, D Isabel still has a special place in the hearts and minds of the people of Estremoz.

D Isabel was noted not only for her strength of purpose and determination, but also for her piety and her devotion to the poor and the sick. Legend has it that D Isabel came out of the castle at Sabugal on a frosty winter´s morning to give bread to the poorest people at the castle gate. She was surprised by her disapproving royal husband who asked her where she was going and what she had in her apron.  São rosas, senhor! she responded, and D Diniz disbelieving, said, Rosas, no inverno?  She let go the hem of her apron and instead of the bread she was hiding, roses fell out.  After such miracles it is scarcely surprising that Pope Leo X in 1516 was able to ensure her beatification.  This holy honour may have been helped by the fact that, soon after the voyage of Vasco da Gama, D Manuel I was loading Pope Leo with gifts of spices and other riches from India.  D Isabel was ultimately canonised by Urban VIII in 1625.

Following the Spanish defeat at the battle of The Lines of Elvas in 1659 during the Wars of the Restoration, the dowager queen of D João IV, D Luísa de Gusmão ordered that a chapel be built to the memory of Rainha Santa Isabel in the apartment where D Isabel had died. Portuguese forces had gathered in Estremoz before successfully repelling the Spanish besiegers of Elvas. The Capela de Santa Isabel was further embellished at the order of D João V in the 18th century.

Estremoz was the location of the death of D Pedro I in 1367 (he was the famous lover of D Inês de Castro, and they are buried in the transepts of Alcobaça), and Estremoz declared early for D João of Avis. The first battle of his insurrection was fought nearby at Atoleiros (1384) under the leadership of another Portuguese saint, D Nun´Álvares Pereira, now São Nuno de Santa Maria.  On the morning of 17 August, 1698 the mediaeval palace being used at that time as an Armoury and powder store, suddenly exploded, fortunately sparing the Torre de Três Coroas

Estremoz is situated at the crossroads of two important routeways:  Faro - Guarda and Lisbon - Madrid.  Its strategic position during the War of Restoration in the 17th century led to the construction of walls and gates in 1642 directed by the Flemish Jesuit, João Pascácio Cosmander and later in 1680 the works were completed by the Lord Cosmographer of the Kingdom, Luís Serrão Pimental (it was he who described it as the ideal military city).  The fortifications were further improved according to the Vauban system early in the 18th century.  Behind Elvas, Estremoz provided a second line of defence, and its status increased; more people moved into the town and the economic growth based in olive oil, wool, meat and leather made the  Lord Mayor of Estremoz one of the most prosperous dignitaries in the whole of the Alentejo.  The economic success was reflected in the richness of the town´s buildings. Notable are the 5 Passos Chapels (ordered by the Brotherhood of Senhor Jesus dos Passos) with interior blue tile panels by Policarpo de Oliveira Bernardes. 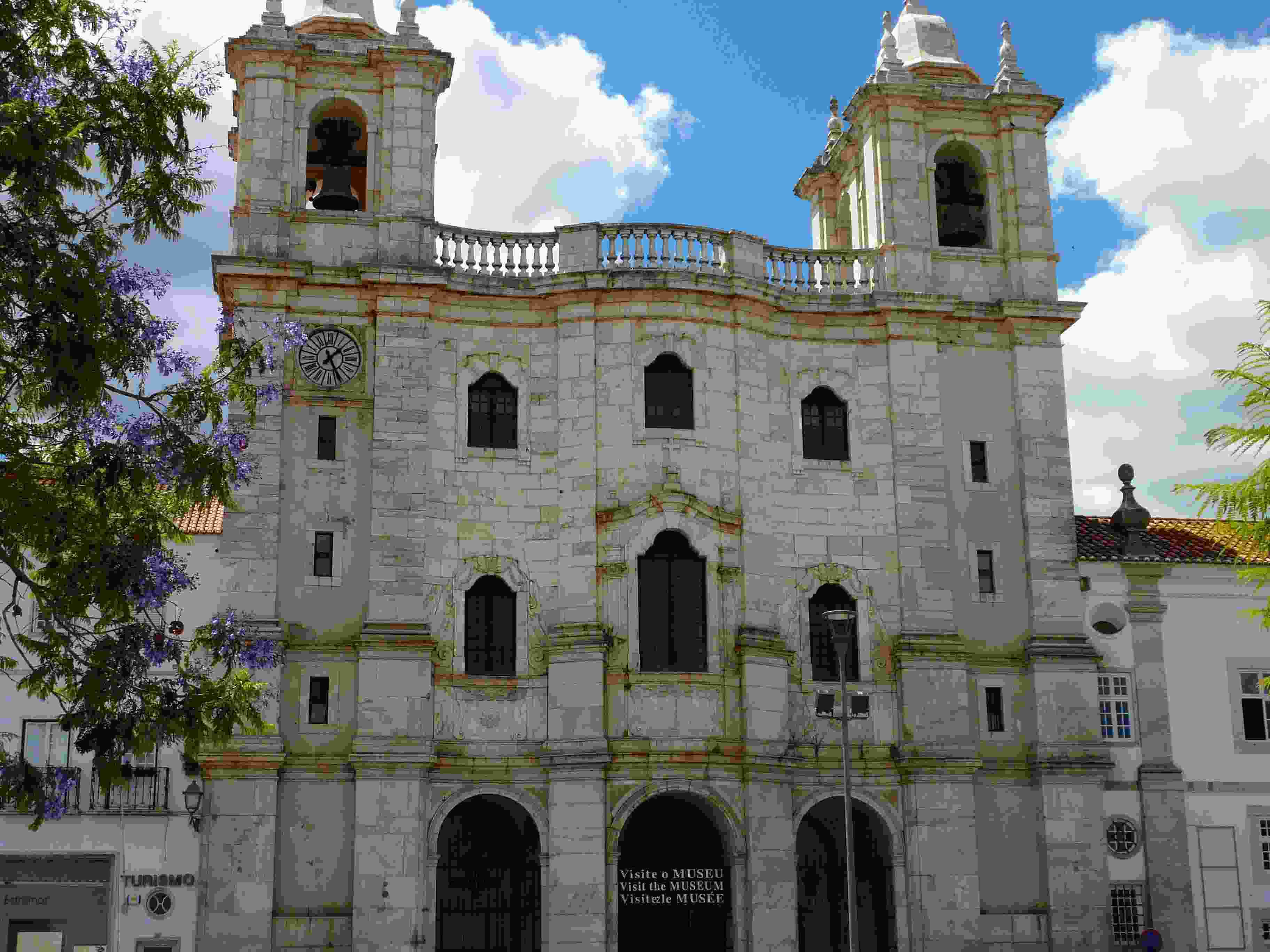 Other notable Joanine baroque buildings are the Royal Hospital of São João de Deus, the Palace of the Marquêses of Praia and Monforte, The Royal Armoury of D João V (now the Pousada of Rainha Santa Isabel), the Convent of Nossa Senhora da Consolação, the Church of the Convent of São Francisco, the Convent of the Congregados and the Cisterna Gadhana.  This last is an all marble cistern supplied by a subterranean channel that crosses the width of the Rossio Marquês de Pombal and whose water flows into a scallop shell fashioned in marble.  In the 19th century the cistern acquired the name Gadanha, meaning scythe to symbolise the ephemeral nature of life.

All this building was made possible by the proximity of the white gold - the 40 km outcrop of marble that runs from Sousel to nearby Alandroal.  The marble from this bed has shaped and coloured the towns of Estremoz, Vila Viçosa and Borba, and much marble has also gone to Évora.  The Roman temple of Diana in Évora and the high altar of Évora Cathedral both use Estremoz marble.  So plentiful is the high grade marble that it is used even in the humblest of homes.

You´ll go to Estremoz and see its little dolls and you´ll save your soul, wrote José Saramago in Journey to Portugal.  From the 16th century os barros have appeared in sitting rooms, kitchens and alcoves throughout Europe. These little earthenware figurines have been made into an art form - the dolls of Estremoz.  Made of clay, dried, painted and varnished, they take the form of figurines of gentlemen, of Napoleon, of pastoral scenes and even those destined for altars.  Floral motifs are common on these pieces and sometimes marble was used for a decorative inlay. Early pieces were often variations on porous water coolers known as moringues but much of the work is now ornamental.  The Museu Municipal Professor Joaquim Vermelho is close to the castle and it contains dolls made of wood, cork and horn as well as displays of os barros and even artisans in the process of making more earthenware dolls.

Around Estremoz the landscape is changing and cereal crops are being superseded by the vines of the great Alentejano wine industry.  The soil is good for vines and a wide variety of grapes grow well:  the red Aragonez, Periquita and Trincadeira and the white Antão Vaz, Arinto and Roupeiro.

It is hard to believe that Queen Isabel´s palace became an ammunition dump with the inevitable explosion in 1689 which destroyed much of the palace and the surrounding castle, but thankfully not the Tower of the Three Crowns.  D João V restored the palace for use as an armoury and more recently the palace has been refurbished  to look like the palace it once was, but now in the guise of the Pousada Rainha Isabel. Estremoz, the Queen of the Alentejo, was the birthplace of António de Spínola, figurehead for the Carnation Revolution.

Just around the corner from the Pousada is the entrance to Queen Isabel´s chapel. It is necessary to ask the guardian of the nearby church for permission to visit the Chapel.  The kindly chatelaine opened the gate with an 18 inch key before letting us into the stairway to the Chapel, which lies over the dining room of the Pousada. The chapel walls are covered with tiled scenes of Rainha Santa Isabel´s life and behind the altar there is a tiny room, high up in the walls, in which the Saint breathed her last.  Our friendly chatelaine assured us that the saintly queen is still performing miracles for the people of Estremoz.