Journey to Portugal 1: Palmela and the Monks of War

".... it has to be said that a journey to a country must always involve starting from beyond its frontiers."  (José Saramago in his author´s preface to the English edition of his book, Journey to Portugal:  A Pursuit of Portugal´s History and Culture 2000.) Eleven years ago, Peter and I chose Portugal as the place where we wanted to spend the rest of our lives.  Ever since we arrived from beyond its frontiers, we have wanted to learn and understand as much as we can about the history and culture of our adopted country.  One of the ways in which we learn is to do what Saramago did:  we travel around the country and look, but unlike Saramago whose journey lasted just 6 months we have now journeyed over eleven years.  We hope that our pursuit of the culture and history of Portugal will last for quite some time yet.

Voyages of Discovery:  Palmela and the Monks of War

"... Palmela, a high village that produces a wine so good that two sips of it transform anyone"  (José Saramago).  It certainly was not wine that the Bishop of Évora, Dom García de Meneses, drank in the castle of Palmela in 1484.  According to the historian, Rui de Pina, it was poison.  De Meneses was a ringleader of a regicide plot and the King, D João II, had already killed with his own hands another of the plotters, his brother-in-law the Duke of Viseu.  (The King had enquired of the Duke, "What would you do if someone was plotting to kill you?"  "Kill them first," replied the Duke.  Whereupon D João stabbed him to death.)

The area around Palmela has experienced human habitation from palaeolithic times and the name Palmela comes from the Roman founder of the town, Cornelius Palma. 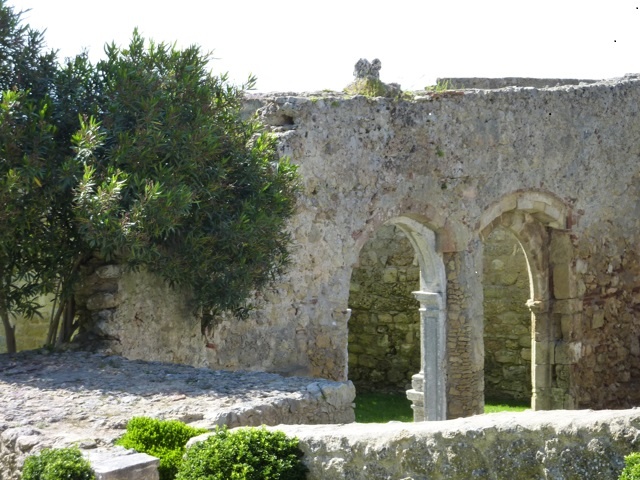 The area was under Muslim occupation for four hundred years until Portugal´s first king D AfonsoHenriques took the castle in 1147. Palmela Castle between the Sado and Tejo river basins was a key point in the defensive triangle covering Lisbon.  The castle complex occupies a high crag within sight of the town of Setúbal and anyone in this castle could easily survey both river estuaries and dominate the approaches to the Setúbal peninsula.

According to Camões in Os Lusíados, D Afonso managed to take the castle with only 60 warriors and in 1185 the king gave the defence of the castle to the Knights of Santiago.  Christians and Moors disputed the possession of Palmela until the reign of D Sancho II (1223 - 48) when the Portuguese confirmed their possession.  In 1323 D Dinis elevated the status of Palmela to that of a town. Later, in 1423, D João I ordered the construction of a monastery (convento in Portuguese) for the brotherhood of the Order of Santiago.  From 1443 until the extinction of the religious Orders in 1834, the castle was the seat of the Religious Order of the Knights of Santiago of the Sword.  After it was classified as a National Monument in 1919 work was undertaken to stabilise the ruins and the castle was essentially rebuilt.  It has been at various times the temporary home Nun´Álvares Pereira, commander of the armies of  D João I, and later of D João II, the Perfect Prince.  The African explorer Hermenegildo de Brito Capelo is one of Palmela´s most famous sons. 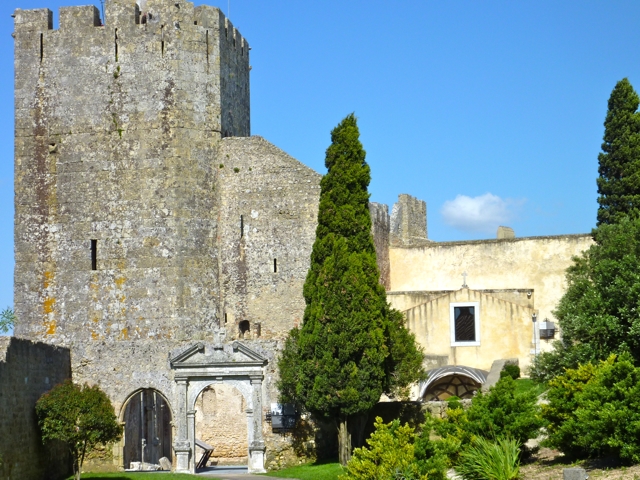 The monastery building is now occupied by the Pousada of Palmela.  Nearby on the castle crag are the churches of Santa Maria and Santiago.  Santa Maria was rebuilt in 1534 and destroyed again in the 1755 earthquake.  Santiago was built in the second half of the fifteenth century to be the conventual church of the Order of Santiago (it houses the sepulchre of D Jorge of Lancaster, son of D João II).

Within the town the church of São Pedro and the Misericórdia are also worth seeing.  Close by may be found Setúbal, the prehistoric caves at Quinta do Anjo, Roman ruins at Tróia, the natural park of Arrábida, the Bacalhôa Palace, home to the Infantes of the Aviz dynasty and Afonso Brás de Albuquerque, the Louro Mountain range, the beaches of the Costa Azul and of course Lisbon. 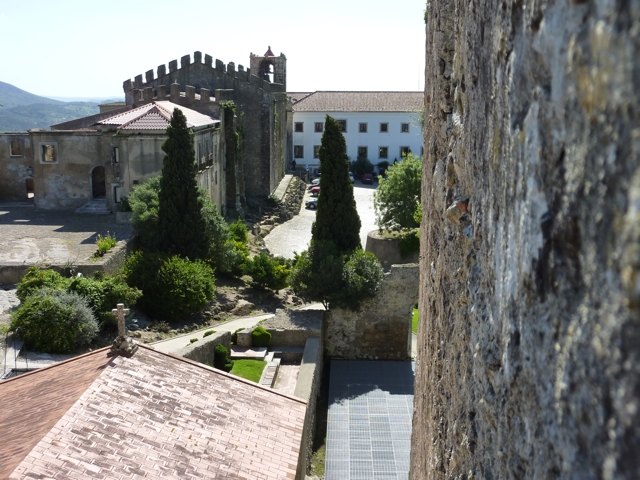 With its stunning views and historic surroundings, the Pousada in Palmela is worth more than a few visits. We have never known how anybody can take only the two sips of wine that Saramago mentioned.  For Peter and me, the wonderful Azeitão wines of the region come by the bottle!