In 1985 Melina Mercouri (Minister of Culture in Greece) and her French counterpart Jack Lang launched the idea of a yearly nomination of a European Capital of Culture to celebrate the richness and diversity of culture in Europe. Whether or not you have already visited Guimarães, there is no better year make a visit than the current year because in 2012 Guimarães shares with Maribor in Slovenia the coveted title of European Capital of Culture.  There are many signs of preparation in Guimarães and as we walked in the city in January this year, the sense of pride among its citizens was palpable. 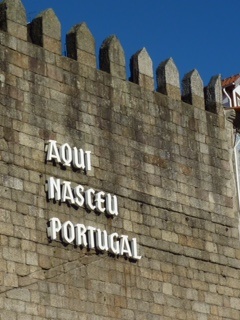 The granite historic centre of Guimarães is one of  the thirteen UNESCO World Heritage sites in Portugal.  It is known as the cradle of Portugal because it was in the seven towered Guimarães Castle in 1109 that Afonso Henriques the first king of Portugal was born.   He claimed the title of King after he had defeated first his mother´s army (she was Castilian) in 1128 at the battle of São Mamede and secondly the Moors at the battle of Ourique in 1139.  Portugal as a nation was born when Afonso I Henriques was accepted as king by both the Portuguese and his former feudal overlord, Alfonso VII King of León and Emperor of All Spain.  Afonso was probably baptised in the nearby the Igreja de São Miguel and his magnificent statue (1887) stands just below the church and in front of  the Ducal Palace with its characteristic tall brick chimneys.  The Palace was built in 1401 by D Afonso, first Duke of Bragança, but fell into disuse and ruin after the Bragança family moved its seat to Vila Viçosa in the Alentejo in the 1500s. According to José Saramago, in 1933 the Ducal Palace at Guimarães was heavily over-restored in order to provide an official state residence for Dr Salazar, and it still serves as a pousada for visiting heads of state.  Its other use is a museum housing armoury, tapestries, carpets, furniture, porcelain and paintings.

In his book Journey to Portugal, José Saramago was usually scathing about the Portuguese towns he visited.  To my great surprise, Guimarães was an exception and he reserved his highest praise for the two major museums in the city. Having made my visits to these museums, I agree with him that they are well worth a visit.  The Martins Sarmento Museum houses a fine collection of  Roman and Visigothic remains as well as Celtiberian artefacts from the nearby Citânias of Briteiros and Sabroso.  Even the guide was enthusiastic as he showed the collection to another group of visitors.  Of the Alberto Sampaio Museum, Saramago declares it to be one of the most beautiful museums he knows.   Housed around the beautiful Romanesque cloister of Nossa Senhora da Oliveira in the heart of the city, its highlights include first a fourteenth century triptych allegedly taken from the Castilians after the battle of Aljubarrota in 1385 and second the tunic supposed to have been worn by D João I Mestre de Aviz at the same battle. 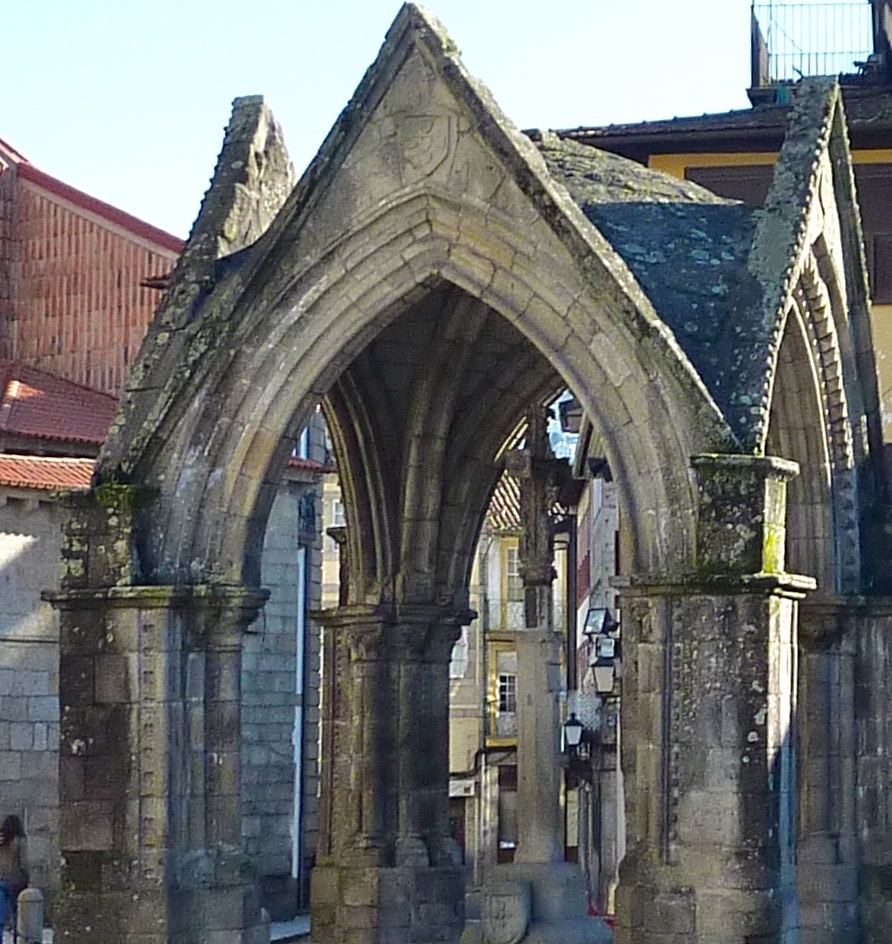 The Igreja de Nossa Senhora da Oliveira was founded by Countess Mumadona in the tenth century. Immediately in front of it is a Gothic canopy and cross said to mark the spot where Wamba King of the Visigoths drove his spear into the ground, refusing to reign unless the spear immediately sprouted.  It did and it was an olive tree, hence the name of the church.  As he set out from Guimarães for the fateful battle, D João I attributed to Wamba´s miraculous spear a sign of divine favour for the Portuguese. 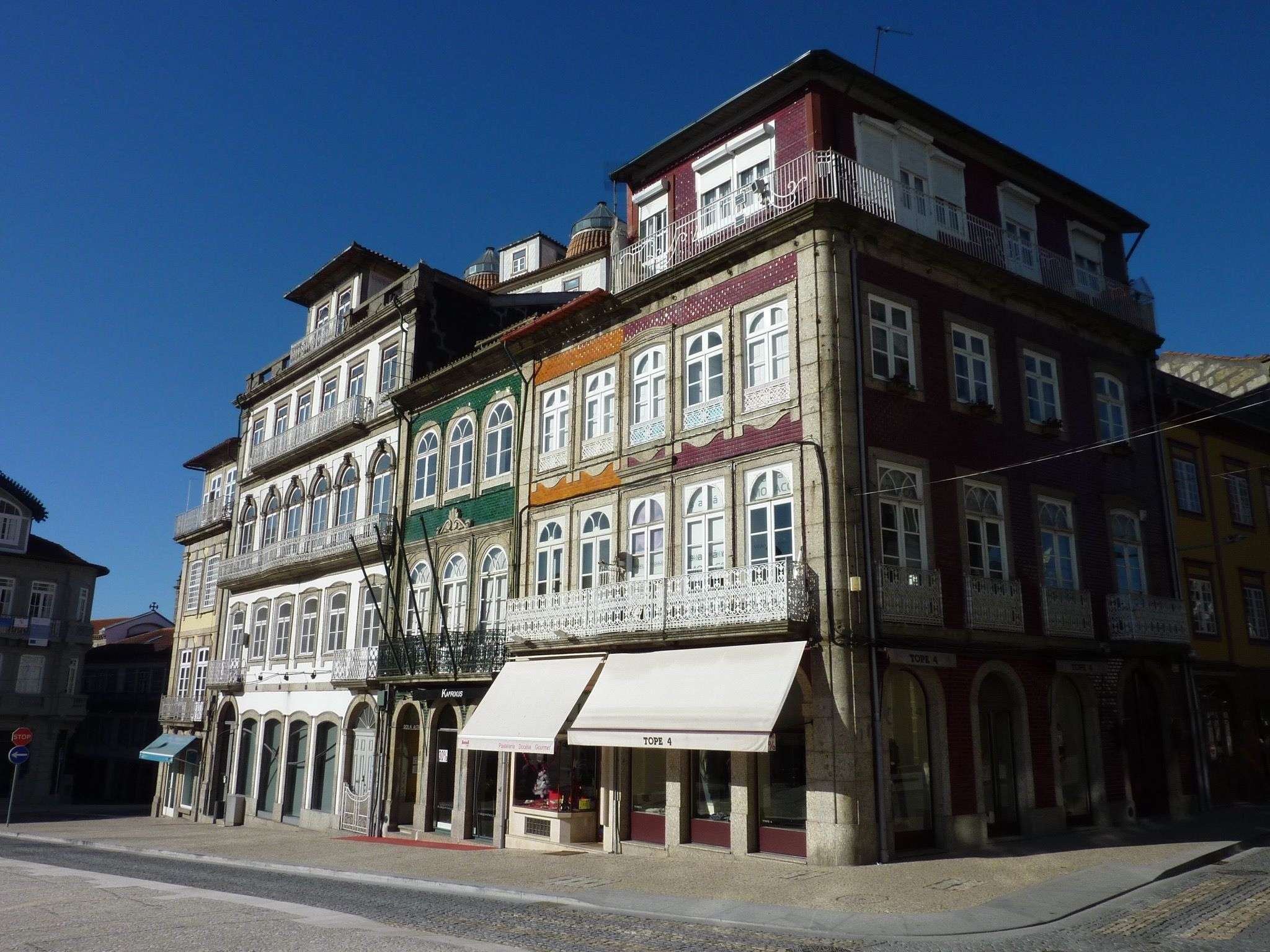 As I wandered the historic centre with its medieval streets and squares, I could easily appreciate the qualities which have led to its nomination as a world heritage site. Buildings in beautiful colours, wrought iron verandas, stone pillars and plenty of cafés and restaurants to tempt you to remain. The Rua de Santa Maria is the main twelfth century street which descends from the castle to Nª Srª da Oliveira passing en route the Praça de Santiago and the Largo da Oliveira.  Another street to explore is Rua da Rainha with the Lobo Machado Palace, the High Court and another statue of D Afonso Henriques but this time by the famous modern Portuguese sculptor, João Cutileiro. The southern part of the old town offers opportunity for strolling along the tree-lined gardens of the Alameda São Dâmaso.  Even on a weekday in January we found the Guimarense out enjoying their alameda in the winter sunshine.

Looking down over Guimarães is Mount Penha, at its peak 617 metres above sea level.  In 1702 the French hermit William Marino settled here in a natural grotto.  The area is full of boulders, springs, trees and more grottoes and it has become a place of religious retreat under the auspices of the Brotherhood of Our Lady of Mt Carmel at Penha.  This holy place may be reached via the city´s  own funicular which is in itself a fascinating ride. 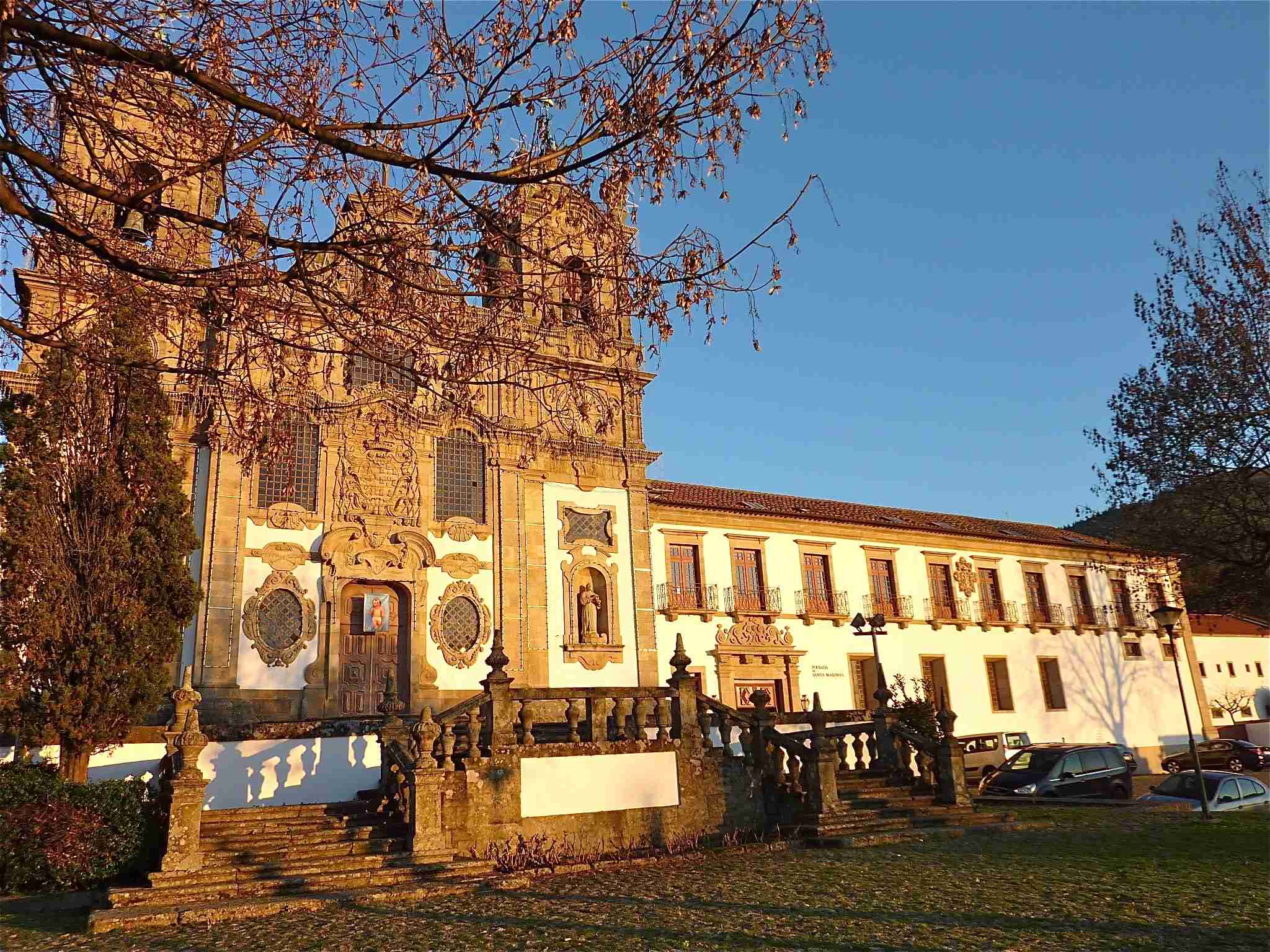 Guimarães is unusual in Portugal in that it possesses two pousadas.  In the historic centre is the Poudasa da Nossa Senhora da Oliveira and about a kilometre outside the city is the Convento de Santa Marinha which dates back to the beginning of the Christian Reconquest at the end of the eleventh century.   It was acquired by the state in 1972 and converted into a luxurious pousada retaining its seventeenth century tiles, 100 metre long corridors, fine furniture and even a moçarabe doorway.  We found that the tiled loggia at the end of the monastic corridor with its azulejos and fountain was an excellent place to enjoy a glass of wine in the late afternoon sun at the end of a day´s sightseeing.