Journey to Portugal 15. Aveiro: Seaweed, Salt and a Saint 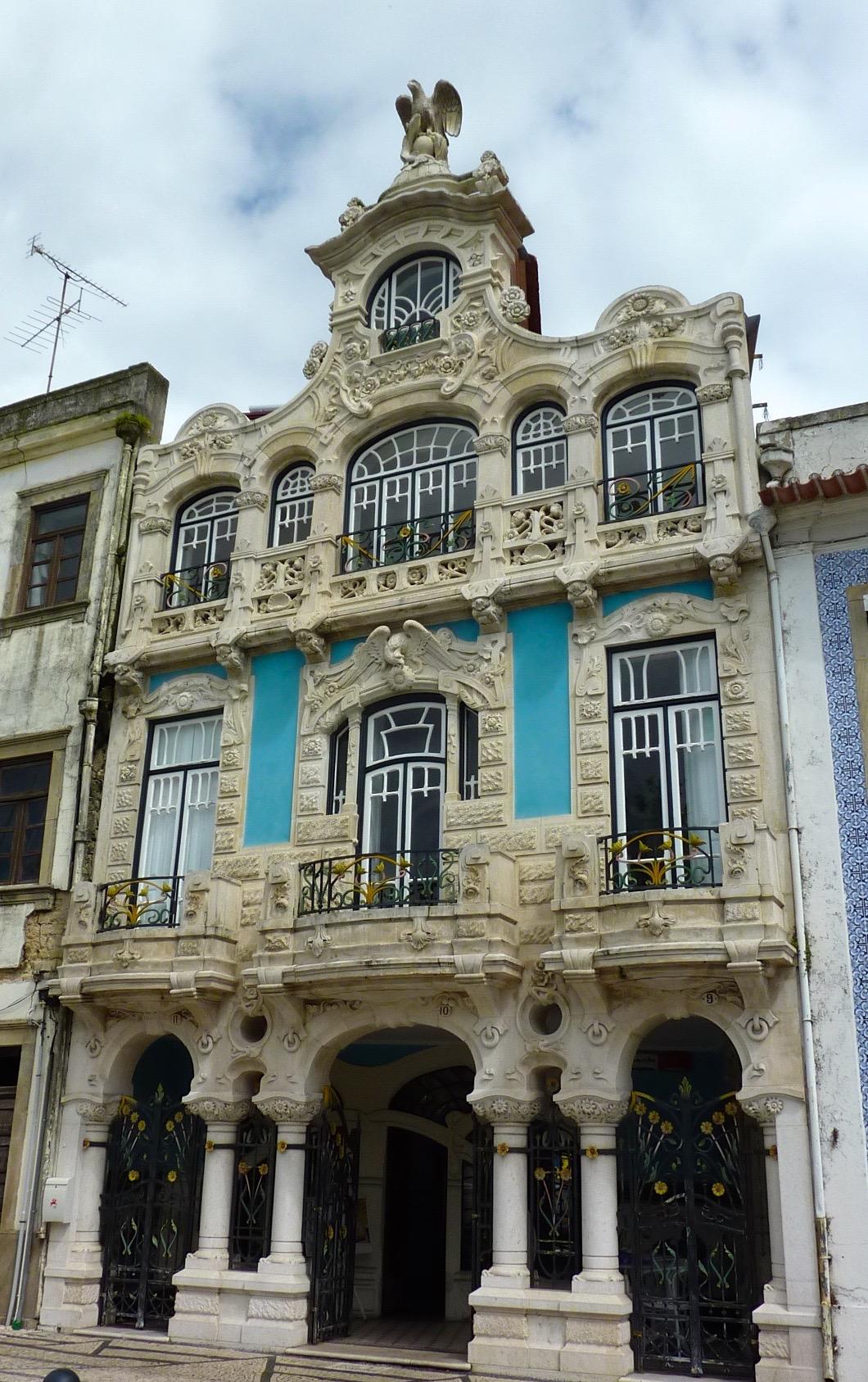 Quirkiness is one of Portugal´s best loved features, and I have no misgivings about using the word quirky again to describe the city of Aveiro.  Aveiro has been called the Amsterdam of Portugal and the Venice of Portugal as well as the most attractive town in Beira Litoral (Lonely Planet 1999).  This charming city has canals, Arte Nouveau buildings, the best tea house in Portugal and its very own Saint – St Joana.  This city together with its close neighbours Ílhavo and Gafanha de Nazaré was the sixteenth century base for the cod fishing fleet (as it was again between 1840 and 1960).

Gathering Place of Birds and of Great Salt

Aveiro has been a centre of population since at least the tenth century when it was first known as terras in alavario et salinas (lands of birds and salt pans). The reference is found in a document dated 26 January 959 recording the donation made by the Countess Mumadona Dias to Guimarães Abbey.   The area fell for a second time under Moorish rule after the counter attack of the Almoravid Yusuf ibn Tashfin in the late eleventh century and it was not until the twelfth century that it was reconquered by Christian forces for the second and last time.   One of the reasons why Aveiro hosted  Portugal´s fishing fleet was the easy availability of salt, the only means for the preservation of fish before the invention of refrigeration.

Aveiro has a relationship with the sea, with a lagoon and with its own canals. Its coastal position ensured its primacy as a port during much of the Middle Ages but in 1575 a colossal storm altered the course of the River Vouga and closed the mouth of the lagoon.  The harbour began to silt up and the city´s position as a major port was threatened. The marshes which resulted from the closure of the bar also caused huge health problems for the city´s population, which fell from 14 000 in 1570 to 3 500 by 1759, when D José raised Aveiro to city status.   Not until 1808 did the city authorities  cut through the bar to make a channel to the sea.  This cut was lined with stones taken from the town walls. 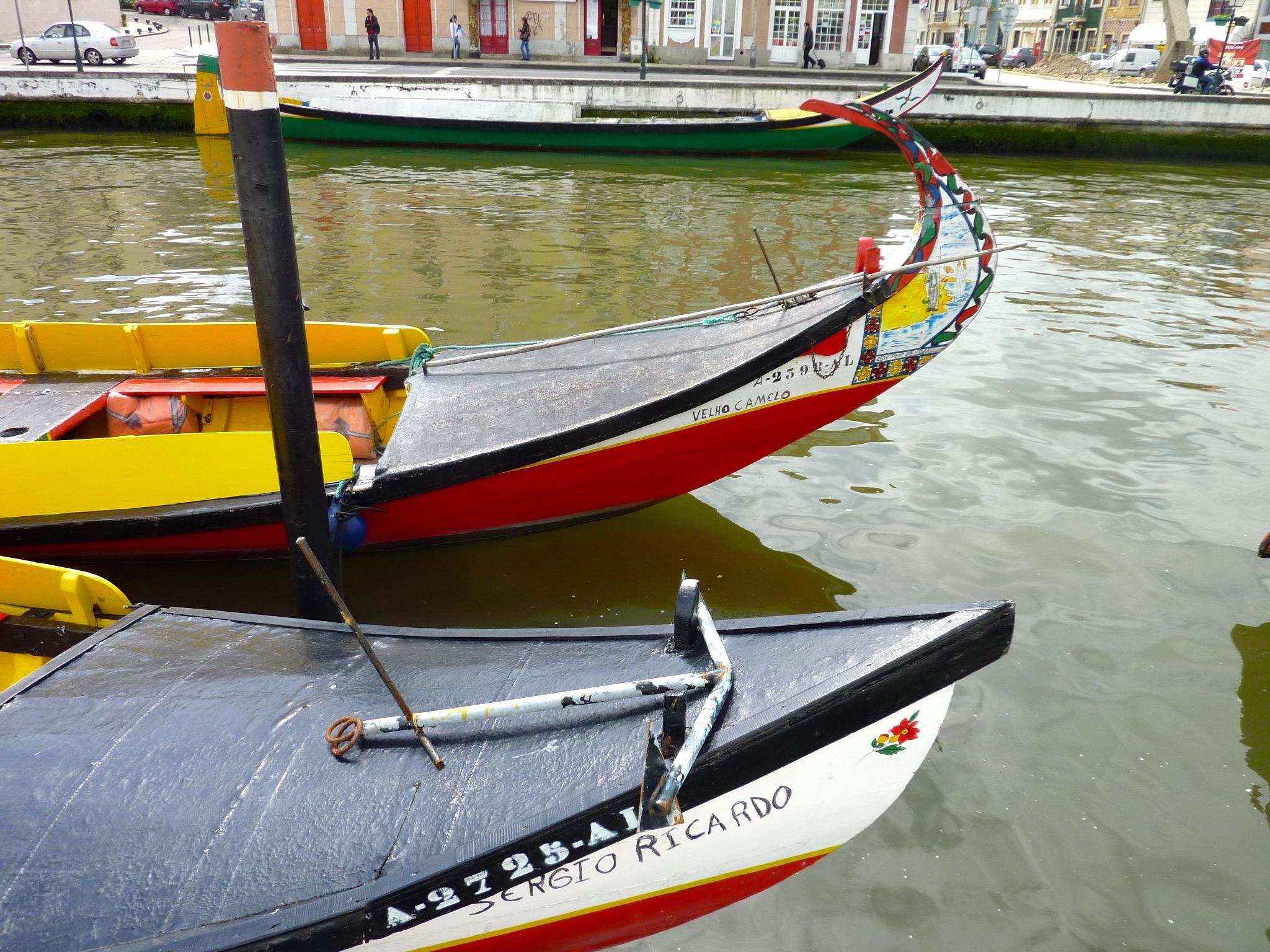 The re-opening of sea access to the port of Aveiro allowed the marshes to drain, leaving only shallow saltwater lagoons.   From this point onwards Aveiro quickly regained its importance as a fishing and industrial centre.  Today, salt is still an economic mainstay.  At one time, the harvesting of seaweed (molico) from the estuary to be used as fertiliser was important but this industry  is now in decline and the colourful seaweed harvest boats (moliceiros) are now used for tourist jaunts on the lagoons and around the town's canals.

The city of Aveiro does not possess any beaches of its own but the coast to the northwest and southwest is a more or less a continuous line of sandy beaches divided only by the cut and separated from the city itself by the saltwater lagoons.  It is possible to bathe on the sheltered lagoon side but many prefer the ocean with its magnificent waves.  It is possible to cross the lagoon by ferry to the north and access the reserva natural das Dunas de São Jacinto which protects some of the best dune habitats in Europe.  Forty km of coastline, 20 km inland, firm ground and peninsulas, every colour the river or the sea could ever command.  (José Saramago in his Journey to Portugal). 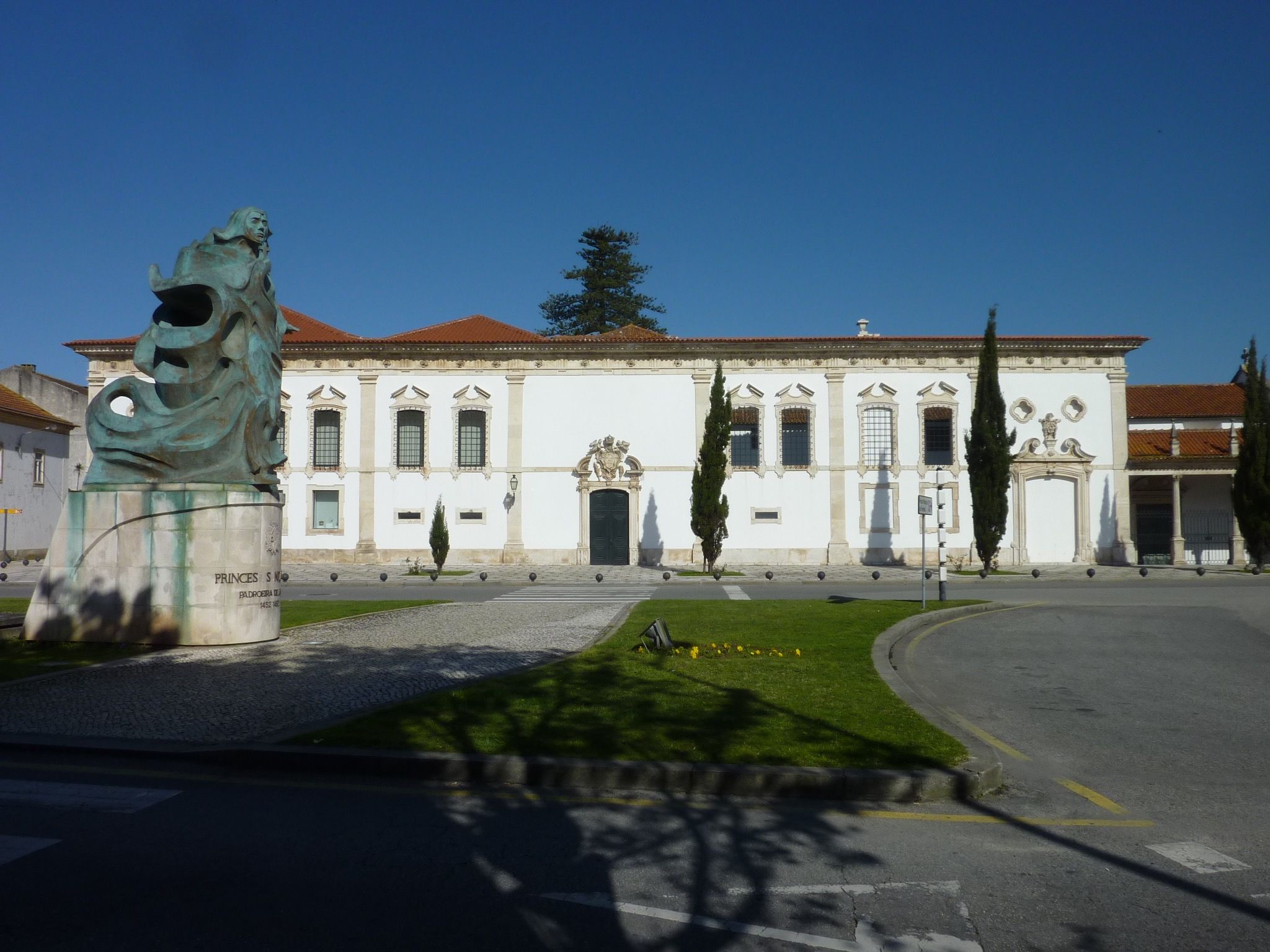 Saramago is scathing about the lack of monuments in Aveiro, and many of the guide books agree with him that the only sight of real note is the fifteenth century Mosteiro de Jesus which now houses Aveiro´s Municipal Museum. This museum is so splendid that it overshadows the other monuments and buildings in the city such as the Cathedral and the Misericórdia Church. The Mosteiro was founded by D Brites Leitoa and D Mércia Pereira in 1458 in the Dominican order.  In 1461 Pope Pius I issued the bull authorising its establishment and the following year the foundation stone was laid by D Afonso V. The mosteiro closed in 1874 to become a girls´ school and in 1911 after the implantation of the Republic the city council opened the museum in this building to display the many original artifacts of the mosteiro itself. The building itself has recently been expanded and modernised and in the best Portuguese manner seamlessly blends the medieval with the best of modern Portuguese architecture.  It is well worth a visit. 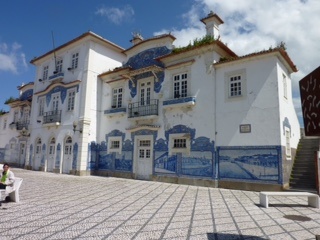 One of the main attractions in Aveiro is its old railway station.  Located at the other end of Avenida Dr Lourenço Peixinho from the city centre, the station building is covered in azulejos showing scenes from the life of local workers.  The station has been superseded by a new building next door, but the azulejos are still on view.

This seventeenth century church was founded in 1598 and funded by the Spanish D Filipe II.  It was not completed until after the restoration and its simple frontage is covered in blue tiles around a neoclassical doorway.  It is a very beautiful building.

The houses of Aveiro and neighbouring Ílhavo are notable for their gay candy stripes.  Alternating stripes of colour with white, these houses fronting the sea are unique and startling.  Originally built of wood, they are now mostly in concrete.  Their colours are so clean and fresh that they must be repainted on an annual basis

The most famous nun at this mosteiro was Princess D Joana, daughter of Afonso V, who entered the convent in 1472 at the age of 20 after having vehemently turned down various marriage proposals.  Although she was not able to take full vows (because she was a potential heiress to the throne of Portugal) she stayed until her death of tuberculosis at the early age of 38 in 1490.  Whilst in the mosteiro, she had turned down further marriage proposals from Charles VIII of France and Richard III of England. Her legend says that she loved the mosteiro gardens to such an extent that as she passed on her way to the grave, all the flowers in the mosteiro garden fell dead on her coffin. Despite her wish for a pauper´s grave, her seventeenth century tomb is a masterpiece of marble mosaic and it stands proudly in the chapel antechamber.  D Joana was beatified in 1693, and Pope Paul VI in 1965 declared her the special protector of the city of Aveiro. Her portrait, accredited to the workshop of Nuno Gonçalves (fl 1470), is one of the many Joanine highlights of this magnificent museum.  It is an iconic image for the city, although it must be said that she appears unhappy or even miserable.

The Aveirense explorer João Afonso was the first European to visit the region of Benin in present day Nigeria and gave the name Rio Fermosa to a Benin river. He helped build a fort at São Jorge da Mina and he is credited for bringing back to Lisbon the first pepper that ever came out of those parts to Europe. This João Afonso is also one of those credited with discovering the great fishing banks off Newfoundland.  The singer and composer José Manuel Cerqueira Afonso dos Santos, better known as Zeca Afonso, (1929 - 1987)  was born in Aveiro.  He was one of the most influential folk and political musicians in Portuguese history, becoming an icon among Portuguese left wing activitists in the resistance against the dictatorial regime of Dr Oliveira Salazar.  His song, Grândola Vila Morena, was played over the radio in the early hours of 25 April 1975 as the signal for the start of the Carnation Revolution.

The success of Aveiro´s industry  in the nineteenth and twentieth centuries is reflected in the wonderful art nouveau houses that adorn the city and in the Arte Nouveau Museum and the Art Nouveau trail.   This museum was scarcely more than a few information posters and was consequently very disappointing.  The trail on the other hand is a wonderful idea and gives the serious tourist the opportunity to visit 28 magnificent buildings in this style.  Although this museum was a let-down the tea house in the same building is very attractive.  The outside furniture consisted of retro bean-bags and the selection of teas on offer was one of the widest I have ever seen.  Their a range of cakes included the Aveirense speciality, ovos moles (or soft egg yolks mixed with sugar)  Our tea was served in beautiful modern crockery (probably from the nearby Vista Alegre factory) as we lounged in our florescent pink bean-bags!