Journey to Portugal 14. Ílhavo: The Portuguese Capital of Bacalhau

Some years ago I fell for the Amsterdam-like charms of the canals and the magnificent azulejos of Aveiro but in January this year, José Saramago´s cynicism about Aveiro caused me to avoid it and turn my attention to the neighbouring town of Ílhavo.  And so part 13 of my Journey to Portugal is unlucky for Aveiro but correspondingly lucky for the little known Ílhavo.  Completely ignored by the standard guidebooks, this small fishing town possesses surprising charms which surpass by far the obvious attractions of its more famous neighbour.  The two cities are so close that strangely the main harbour of Aveiro lies within Ílhavo municipality.

I have never taken the time to get used to the different types of bacalhau and it seems to me unnatural to soak and wash salt fish when fresh fish is so readily available. The Portuguese tradition for eating bacalhau goes back to the fourteenth century when salting was the only way to preserve fish caught a long way from home.  Portugal is the  the fourth largest cod consuming nation in the world and it is not surprising that there are reputed to be 365 ways to cook bacalhau. 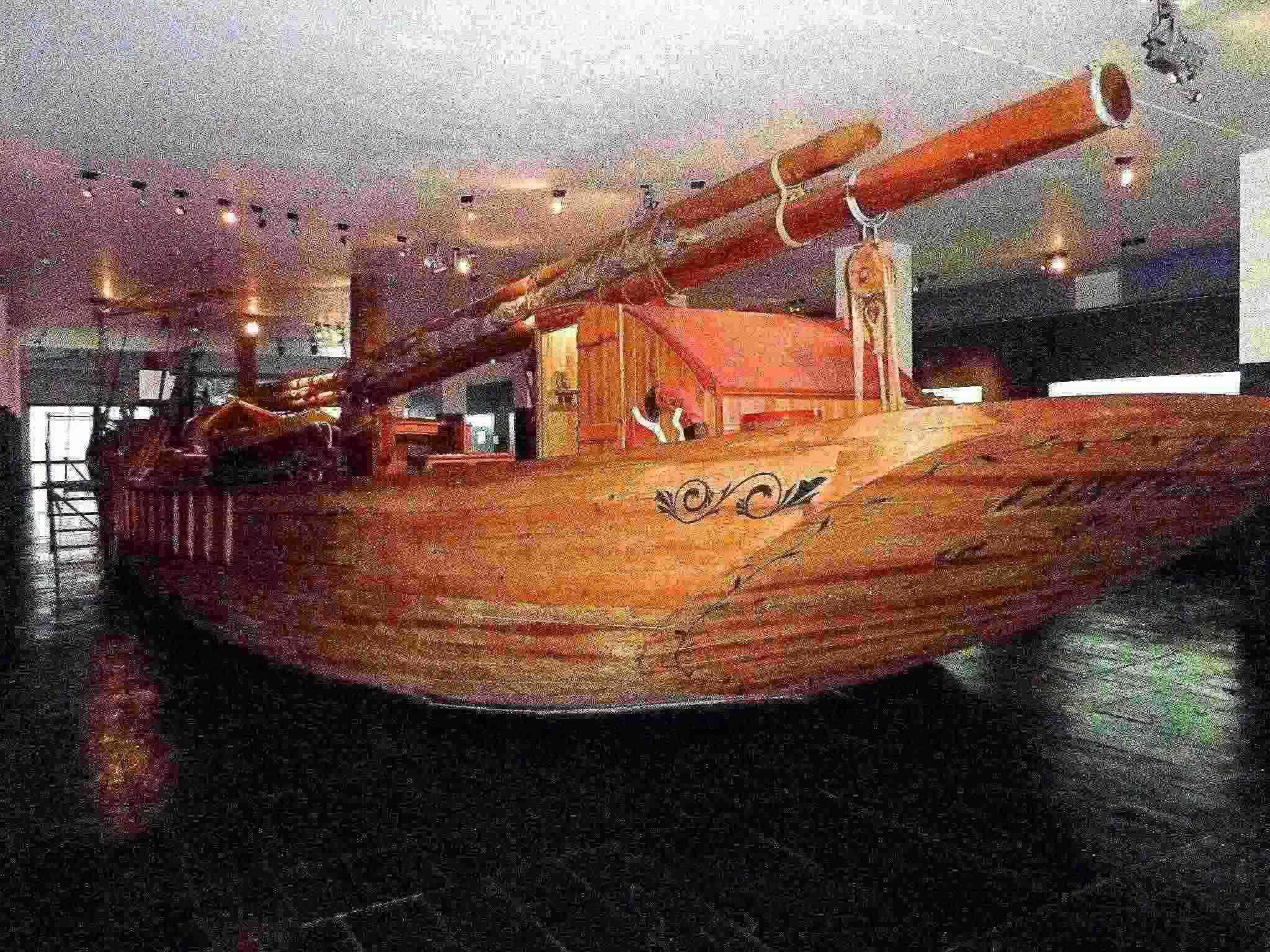 The Maritime Museum, inaugurated in 1937 and re-opened in 2001, is now housed in a magnificent example of  Portuguese modern architecture and the displays are well-organised, accessible, colourful and informative. There is on display Faina Maior the iate bacalhoeiro (a cod fishing mother ship), which is split from stem to stern at the waterline.

By visiting all areas of this ship, visitors can get a feel of what it was like to live and work on these cod fishing boats in the cold waters of the North Atlantic. Cod was originally fished by individuals in small boats called dories.  From these small boats, the one man crew would spend a day jigging for cod.  They were remote from the mother ship, and would be gathered in before nightfall together with their day´s catch.  On deck there is a pile of these frighteningly small dories, and it is difficult to imagine spending a whole day alone in such a boat, floating on the cold north Atlantic, line fishing for cod and hoping that the mother ship would find you at the end of the day.  On a successful day each dory would hold 150kg of cod, which would then all have to be heaved onto the mother ship and salted before the men could rest. 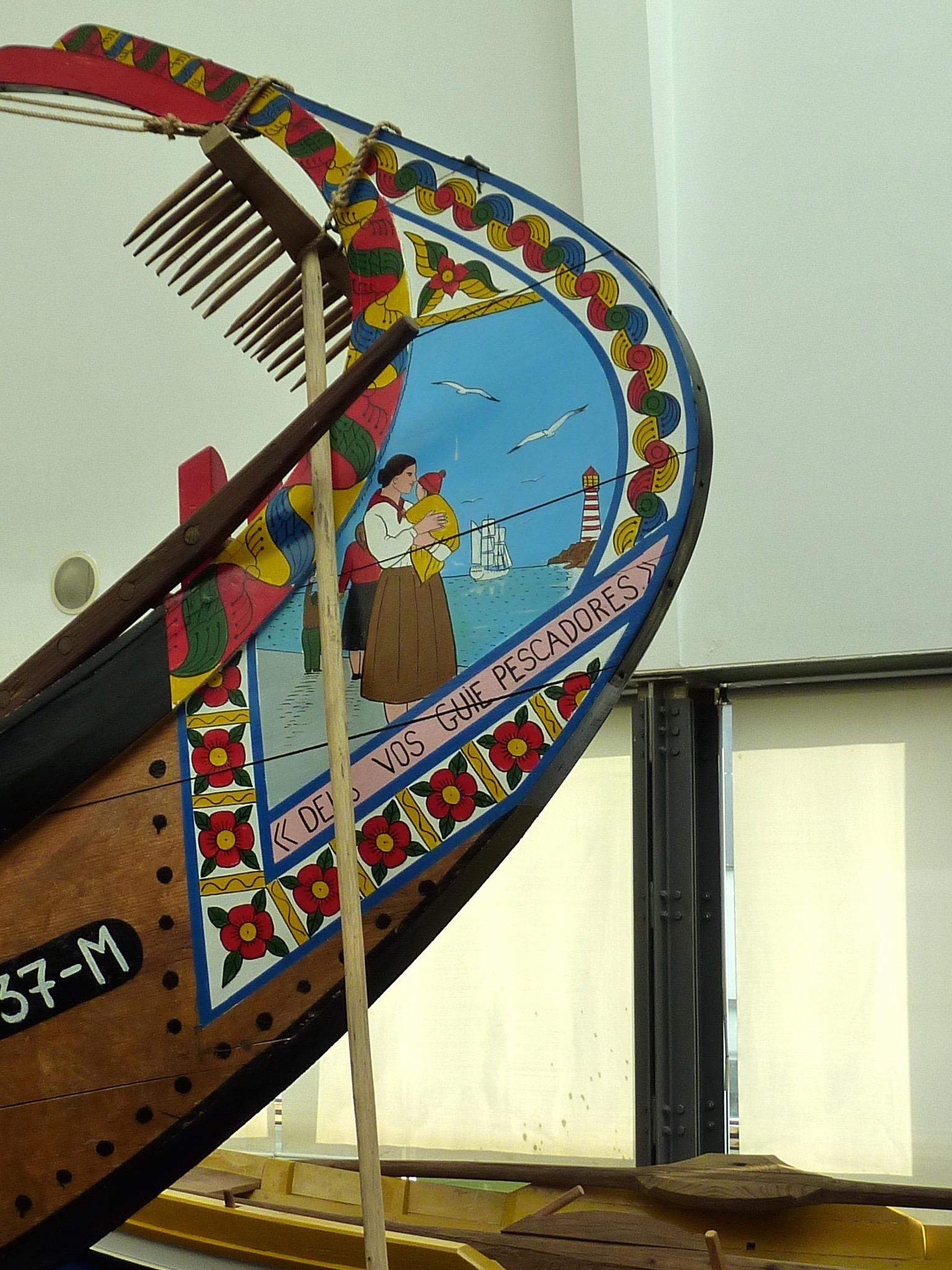 Other exhibits include many colourfully painted local inshore boats of the Ria de Aveiro.  Among the boats in the display are a typical seaweed boat and many other flat bottomed boats and there is a collection of sea-shells from all over the world.  A particularly exciting development is the projected opening of the Aquarium of the Museum.  This aquarium will be dedicated to the cod. The trawler Santo André is currently anchored in the harbour and is open to the public for visits.  This boat is 64 years old and was retired from the fishing fleet in 1997, and it opened as part of the Museum in 1997.

Local women (as Ílhavenses) are traditionally famed for their great beauty. Some attribute this beauty to the Greek colonists from around 400 BC while  others state that the Phoenician settlers are responsible. The Phoenicians arrived first, some 2500 years ago, probably attracted by the seaside lagoons around Ílhavo which offer safe harbours.  The seafaring culture which developed around these lagoons provided an excellent base for the development of a strong fishing industry.  At the turn of the twentieth century, the cod fishing fleet would set out from Ílhavo and call at Lisbon to recruit deck-hands before beginning the long voyage across the Atlantic. It is said that the greatest percentage of captains of the Portuguese long distance fishing boats came from Ílhavo.  The Ílhavo official guidebook states in masterly Enguguese (or Portlish): working in the sea ... their rough hands have won all the obstacles that nature imposed on them. Men impelled by the waves, heroes made by their own strenght, the ilhavenses knew how to build their land, venturing themselves in the Sea that they exhibit as its tradition  (sic). 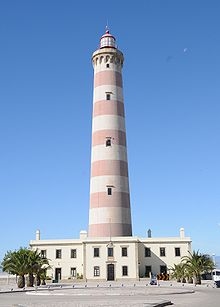 Portugal´s tallest lighthouse, built in the 1890s, is located in Ílhavo.  At 62m the Farol da Barra is taller than its 47 sister Lusitanian lighthouses. 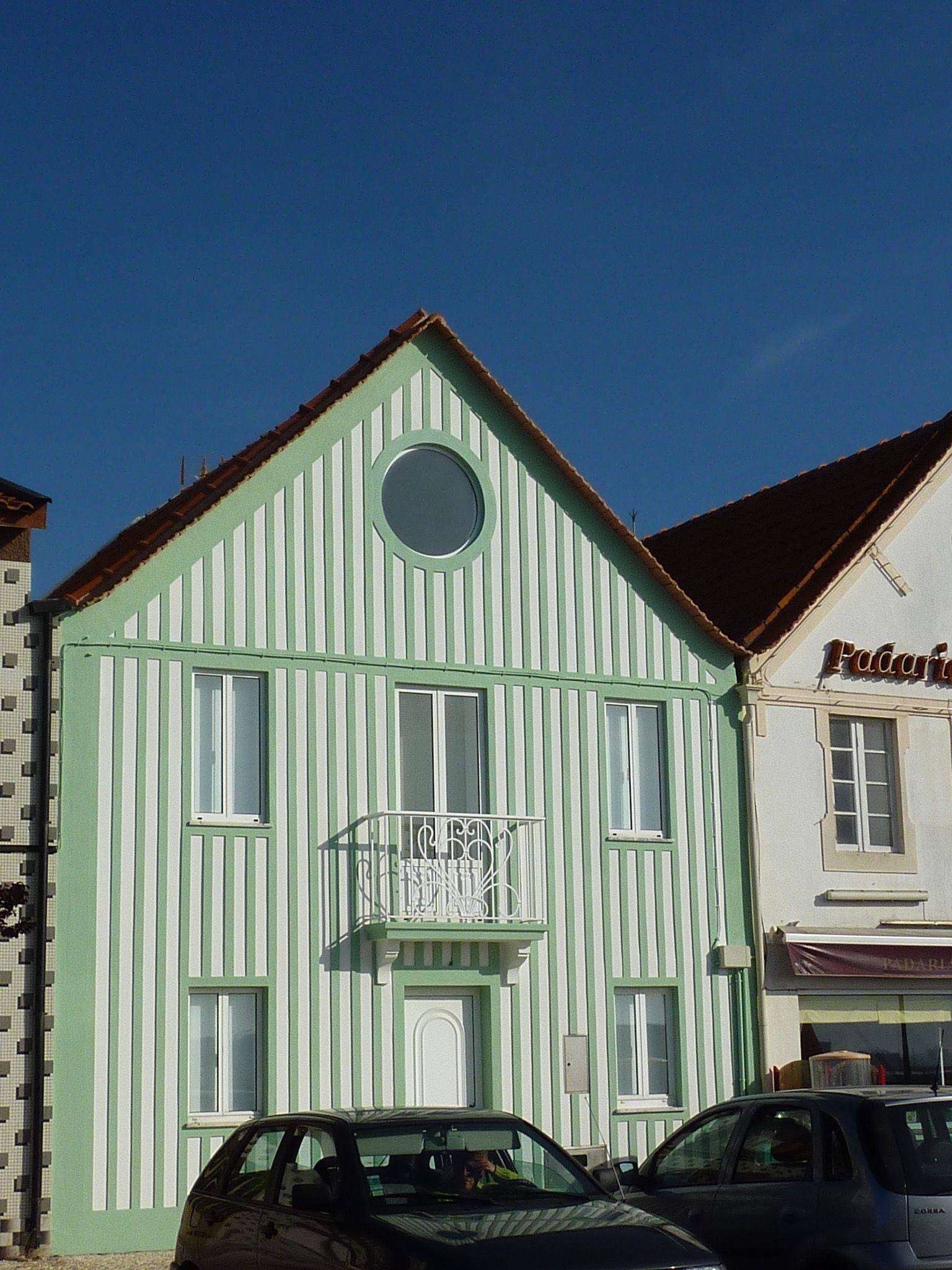 On the nearby Praia da Costa Nova, the beach houses present an astonishing and colourful sight. Originally of wood and now sometimes made of concrete, these houses are called palheiros (literally haystacks).  Painted in white with bright primary colour stripes, either vertical or horizontal,  they present a remarkably colourful sight.

Ílhavo is also famous for its Pão de Vale de Ílhavo which is bread cooked in the form of a log.  It is available either as a full-sized log or as a smaller one known as a twiglet.  The area is famous for its folar which is a sweet bread rolled ito a loaf at Easter.  If you have ever sampled a folar you will know to beware - it may or may not contain in its centre a hard-boiled egg complete with shell.

He descended the coast as far as Vagueira, going through Vagos en route to Vista Alegre.  He had no wish to discuss the Fabric [Factory] Museum ... what proved most worth his while was the church of Our Lady of Penha, relates José Saramago (Journey to Portugal) about his traveller.  Unlike Saramago´s traveller, I was happy to visit the site of the factory, the church, and the Vista Alegre Museum.  The Vista Alegre glass factory was built in 1824, a difficult and unstable time for Portugal.  The three invasions by the French in 1807 – 10 had ruined the Portuguese economy and the liberal revolution of 1820 were followed in 1823 by the counter-revolution on behalf of D Miguel were unstabilising influences. There followed the civil war (the War of the Two Brothers 1828 - 1834) and the painful birth of constitutional liberalism.   The country did not settle politically until Costa Cabral/Chartist regime from 1842  - 1851. The 1820s were not a good time for artistic work, and from the point of view of economics, it was a poor time to start a new business, but fortunately the Vista Alegre factory survived the political turbulence and continues to flourish in Ílhavo.

José Ferreira Pinto Basto originally set up the factory to produce glassware and production reaching considerable proportions between 1837 and 1846.  He later added the manufacture of porcelain after kaolin deposits were found in the area.   Vista Alegre glassware and porcelain have been exhibited in exhibitions in Lisbon, Porto, London, Paris, Vienna, Barcelona, New York, Milan, Honolulu, Copenhagen winning bronze, silver and gold medals and diplomas.  Its products are among the most attractive of Portugal´s porcelain industry.

I cannot leave Ílhavo without referring again to the sea.  In August 2012 there was a week long celebration of the sea, and Ílhavo hosted tall ships, jet skis, and sea processions and the Bacalhau Festival took place a few days later.  Of course, Ílhavo´s seafaring tradition is celebrated throughout the year, and particularly this year, the 75th anniversary of the Maritime Museum.  On 17 November the Maritime Museum will host a new exhibiton celebrating the history of packet boats and on 7 and 8 December in the Cultural Centre there are performances of Tá Mar: a theatrical project based on the work of that name by Alfredo Cortez.  It was originally performed in Lisbon in 1936.  The 2012 production involves 24 Ílhavenses from the ages 7 to 70 in a performance that celebrates the golden age of Portuguese theatre as well as the sea.  Ironically, the director of the piece, Graeme Pulleyn,  comes from another nation with a seafaring tradition.  England.

Aveiro will feature in my Journey to Portugal at some point.   Meanwhile Peter and I will see where our serendipitous travels take us!