Journey to Portugal 13. Sintra: On the Mountains of the Moon 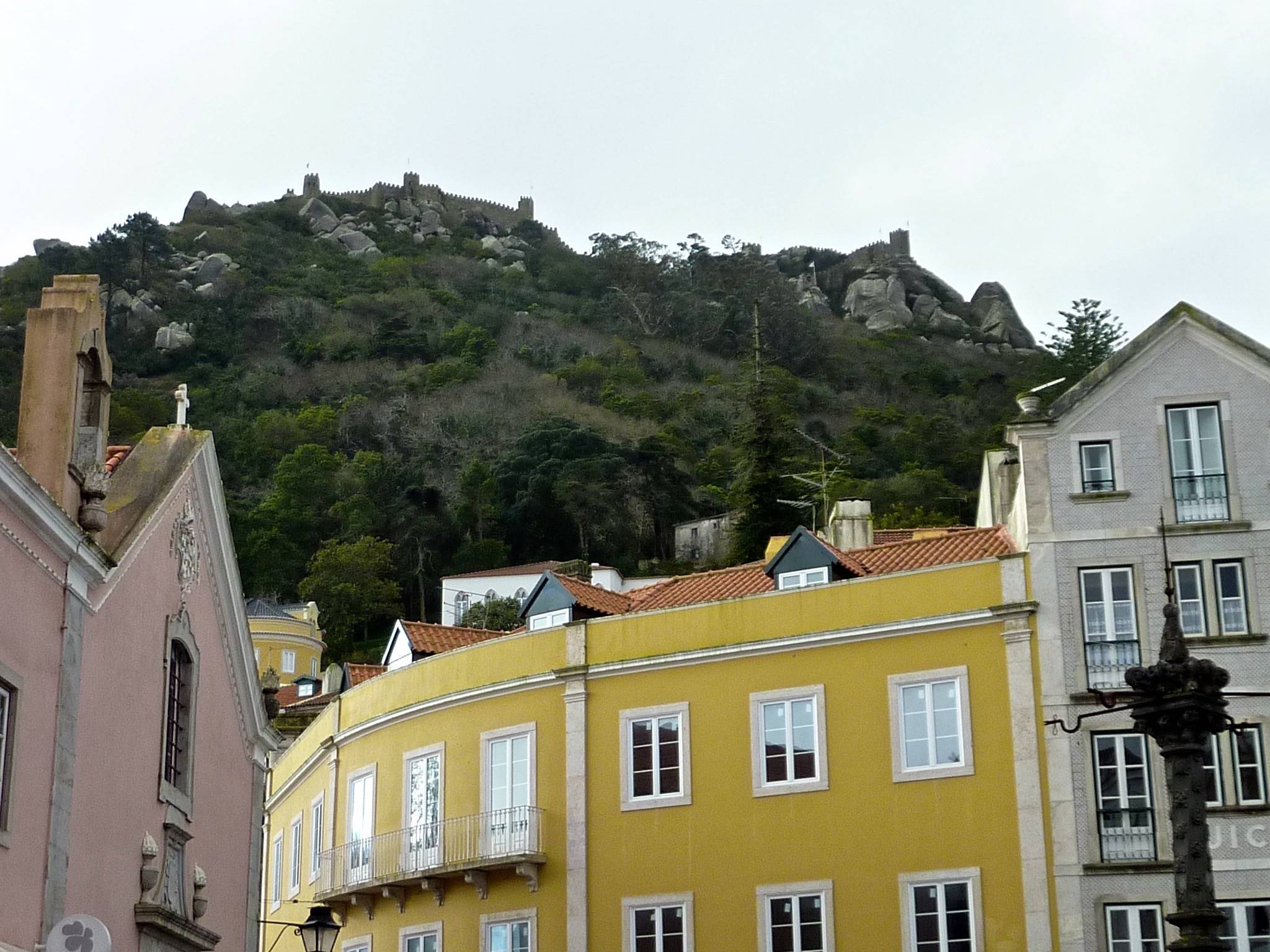 An old Spanish proverb suggests to see the world and leave out Sintra is to go blind. Situated on the northern slopes of the craggy Serra de Sintra with spectacular views towards the coast and rampant verdant vegetation, the Sintra area has been an attraction to the early Iberians, the Romans, the Moors and Portuguese royalty. Nowadays hordes of visitors cram its narrow lanes for its spectacular setting and magnificent palaces and monasteries.

The early Iberians called it the Mountain of the Moon and made it a centre of cult worship.  The Romans and Moors were equally captivated and the remains of the Moorish Castle still overlook the town.  And for 500 years the kings of Portugal chose Sintra as their summer resort and the nobility and rich people of the court built extravagant villas and surrealist palaces on its wooded hillsides.

In 1809 Lord Byron visited Sintra and began his famous travel epic Childe Harold.  Lo!  Cintra´s glorious Eden intervenes, in variegated maze of mount and glen´.  And writing home in a letter to his mother, perhaps in every aspect the most delightful (village) in Europe; it contains beauties of every description natural and artificial.  Palaces and gardens rising in the midst of rocks, cataracs and precipices; convents on stupendous heights, a distant view of the sea and the Tagus ...  it unites in itself all the wildness of the Western Hightlands with the verdure of the South of France.

Among other famous visitors to Sintra was the infamous William Beckford who, at the age of 4 reputedly had music lessons from the 8 year old Mozart.  William was exceptionally talented and it was as a writer and particularly as a travel writer that he distinguished himself.   Beckford´s spectacular hedonism and disregard for convention led to him being hounded out of England by the vindictive and Scottish Lord Loughborough for suspected homosexuality. The Monserrate Palace in Sintra became one of the luxurious places in which he could while away his time in exile. He described his time in Portugal in two books, Letters from Italy, with sketches of Spain and Portugal and Recollections of an Excursion to the Monasteries of Alcobaça and Batalha. 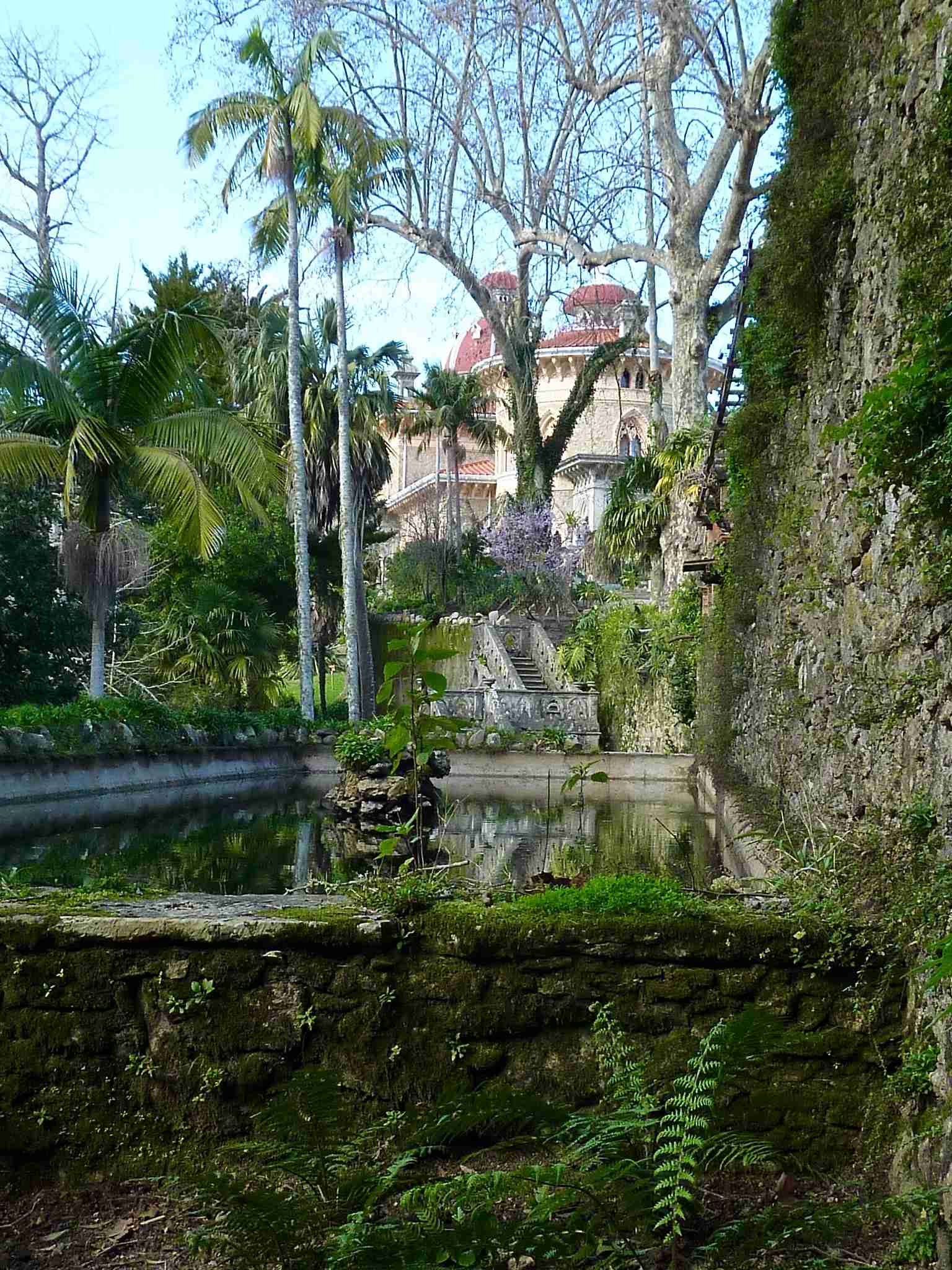 All roads lead to Sintra said sourpuss José Saramago in his Journey to Portugal.  The first place he came to was Beckford´s Monserrate Palace and gardens.  Whilst he enjoyed the exuberance of vegetation he described the palace as an English folly, paid for by the cloth trade ...  a monument to an age that had every taste imaginable, but never really defined any of them ....  eclectic to the point of eccentricity .... As empires dominated the world economically, they amused themselves with alien cultures.   And this was always the first sign of their decadence.

Not everyone is as cynical as Saramago.  Monserrate is one of the most romantic sites in Portugal.  The original building was a Gothic style villa which Beckford in 1793 leased from the English Gerard de Visme. He added an English garden and several landscape follies to its existing grounds which had been landscaped by de Visme, a wealthy English merchant.  The painter William Stockdale enlarged the gardens further in the 1850's during which time the present Moorish style palace was constructed by James Knowles (inspired by the Brighton Pavilion) for another wealthy Englishman, Sir Francis Cook who had made his money in the cloth trade.  The grounds now cover 30 hectares and consist of wooded hillside and flora ranging from conifers to tropical tree ferns, eucalyptus, Himalayan rhododendrons and dozens of species of palm.  It is also home to an increasingly important and comprehensive rose garden.  The rose garden has recently been restored by the Amigos de Monserrate.  The garden was officially re-opened in  the Spring of 2011 in the presence of the Prince of Wales and the Duchess of Cornwall. 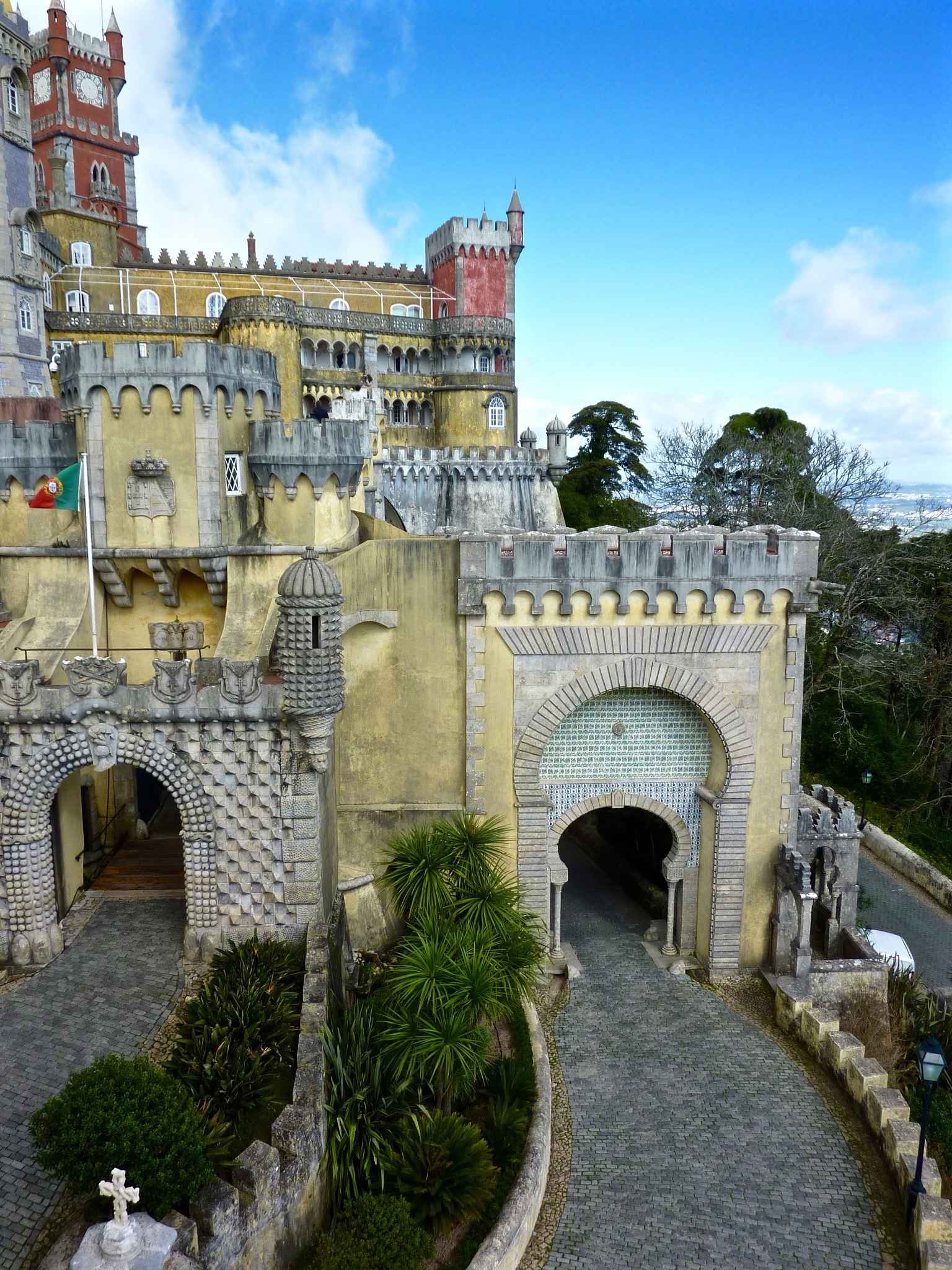 Following in Saramago´s footsteps we next visited the Pena Palace,  ... a building whose individual components are characterised by fantasy, insensibility, bad taste and improvisation, writes the grumpy Saramago. My Lonely Planet guide describes it as an architectural confection, which rivals the best Disneyland castle ...  In the eighteen years since we last visited, the paintwork has become even more stained and faded.  Many  are inclined to call Pena Palace kitschy but I prefer to think of it as quirky and for that reason I like it.  The Palace was built over the ruins of a C16 monastery and it was the brainchild of Ferdinand of Saxe Coburg Gotha, husband of D Maria II, and himself known in Portugal as D Fernando II.  His architect was  Baron Ludwig von Eschwege and together they designed a Bavarian-Neo-Manueline fantasy of embellishments, turrets and battlements.

If you want to castigate the architect for building this tasteless folly then you can find his statue immortalised in armour on a neighouring crag.  The guide books show that the inside of the Palace remains exactly as it was when the royal family left on their flight from Portugal in 1910.   Recently, much restoration work has been done and continues to be done and the stained glass which D Fernando collected has also been restored and is displayed to wonderful effect in the Stag Room of the round tower.  D Fernando and his architect had the good taste to retain the original chapel and genuine Manueline cloister and to build their new palace around the original monastery, which was founded to celebrate the first sight of Vasco da Gama´s returning fleet in 1498.

Like Saramago, we did not continue climbing up to the Castelo dos Mouros.  Saramago felt that Castles should be seen from the outside, and this one, tiny in the distance, was meant to be seen that way, that is symbolically.  And on a cold and blustery day in February, we were pleased to agree with him. This castle was built by the Moors and captured in 1147 by Christian forces under D Afonso Henriques, the first King of Portugal.  The castle spans two rocky pinnacles, with the remains of a mosque spread midway between the fortifications.  If the mist isn´t rolling around then the views (and we did climb up here on our visit eighteen years ago) are extraordinary:  south beyond Lisbon to the Serra de Arrábida, west to Cabo da Roca (the westernmost point of mainland Europe) and north to Peniche and the Berlenga islands.

Instead we descended to the centre of the town to view the Palácio Nacional which dominates the town with its two huge conical chimneys.  It is of Moorish origin and it takes its present form from the rebuilding and enlargements done by D João I in the early C15 and later adorned by Manueline additions during the reign of D Manuel I in the following century.  Historically it is a treasure trove.  It is here that D João I planned his 1415 Ceuta campaign; the 3 year old D Sebastião was crowned king here in 1557; and the paralytic Afonso VI was effectively imprisoned here for six years by his brother Pedro II before dying of apoplexy in 1683 while listening to mass in the chapel gallery.  For once, Saramago liked what he saw.  ...  a vast shoreline where the tides of time have bit by bit deposited their flotsam, slowly accumulating, slowly putting one thing in place of another, and so leaving, more than a simple souvenir of each one.  And, there can be few things more beautiful and restful than the interior courtyards of the Palácio da Vila ...

As if three palaces were not enough for any one town, there is a fourth palace, the Pálacio de Seteais, originally built in 1787 for the Dutch consul in Lisbon.  The name, the Seven Sighs, is said to refer to the Portuguese reaction to the 1808 Convention of Sintra by which British commanders allowed French troops of occupation to leave Portugal peaceably and with all their equipment and loot after their defeat at Vimeiro by Sir Arthur Wellesley (later the Duke of Wellington).  In Britain, this Convention was perceived as disgraceful, and those commanders who had signed the Convention (including Wellesley) were court-martialled.  The palace is now a 5 star hotel which is reputed to be one of the most expensive in the country.

During the Spanish Interregnum (1580 -1640) Felipe II boasted that the sun never set on the lands he governed and then went on to say that his kingdoms contained the richest and poorest convents in the world:  the Escorial and the Capuchin at Sintra.  The Convento dos Capuchos is a tiny troglodyte hermitage, buttressed by huge boulders and darkened by surrounding trees.  The monastery was built in 1560 to house twelve monks.  Some of the cells were little more than hollows in the rock and were lined with cork.  One recluse, Honorius, spent 36 years here.  He was 95 when he died so the cold and rocky surroundings were obviously not unhealthy despite their small size. It is believed that D Sebastião came here often to talk with the friars and Saramago tells of the caretaker who pointed out the tables at which D Sebastião sat and the rings where he tied up his horse. Hermits hid away here until 1834 when the Liberal government dissolved the monasteries and convents of Portugal, and the monastery was finally abandoned.

The Sintra toy museum contains an international collection of clockwork trains, lead soldiers, Dinky toys and porcelain dolls.  João Arbués Moreira, an engineer by profession, began this collection over 60 years ago. In 1997 the Museu de Arte Moderna was opened in Sintra´s neoclassical former casino in Estefânia.  Business tycoon José Berardo and his associate Francisco Capelo have  brought here some of the world´s best postwar art, including work by Warhol, Lichtenstein, Pollock and Kossoff.

I would suggest that you visit Sintra in the winter months because hordes of tourists descend upon Sintra through the rest of the year to clog the narrow lanes.  You may be cold, but you can keep moving.  But it is not for nothing that the kings and queens of Portugal considered these palaces as summer palaces.  Violent and cold winter winds shriek around the craggy Pena Palace, and seeing one of the guardians at the National Palace huddled over an electric radiator in the perishing cold, we suggested to her that even the kings of Portugal had suffered from the cold in Sintra.  Not so, she riposted.  They came to Sintra only during the summer.