Journey to Portugal 2: The Ghosts of Vila Viçosa

Is it the ice-cold winds of the Levante freezing the rolling plains of the Alentejo; the searing heat of the sun in the summer; the huge blocks of marble wrenched from a now ravaged earth;  or is it the spirit of Leonor de Gusmão?  There is some restlessness associated  with this queen of the ´marble´ towns that causes one to feel that this particular spot is haunted ....  or cursed!

When I first visited Vila Viçosa I was awestruck by the beauty of the pink marbled mansions, the pink marbled churches and the pink marbled streets.   The town nestles on a hillside of luxurious citrus groves (viçosa means luxuriant) and the town´s main attraction is the magnificent Ducal Palace of the Bragança family. 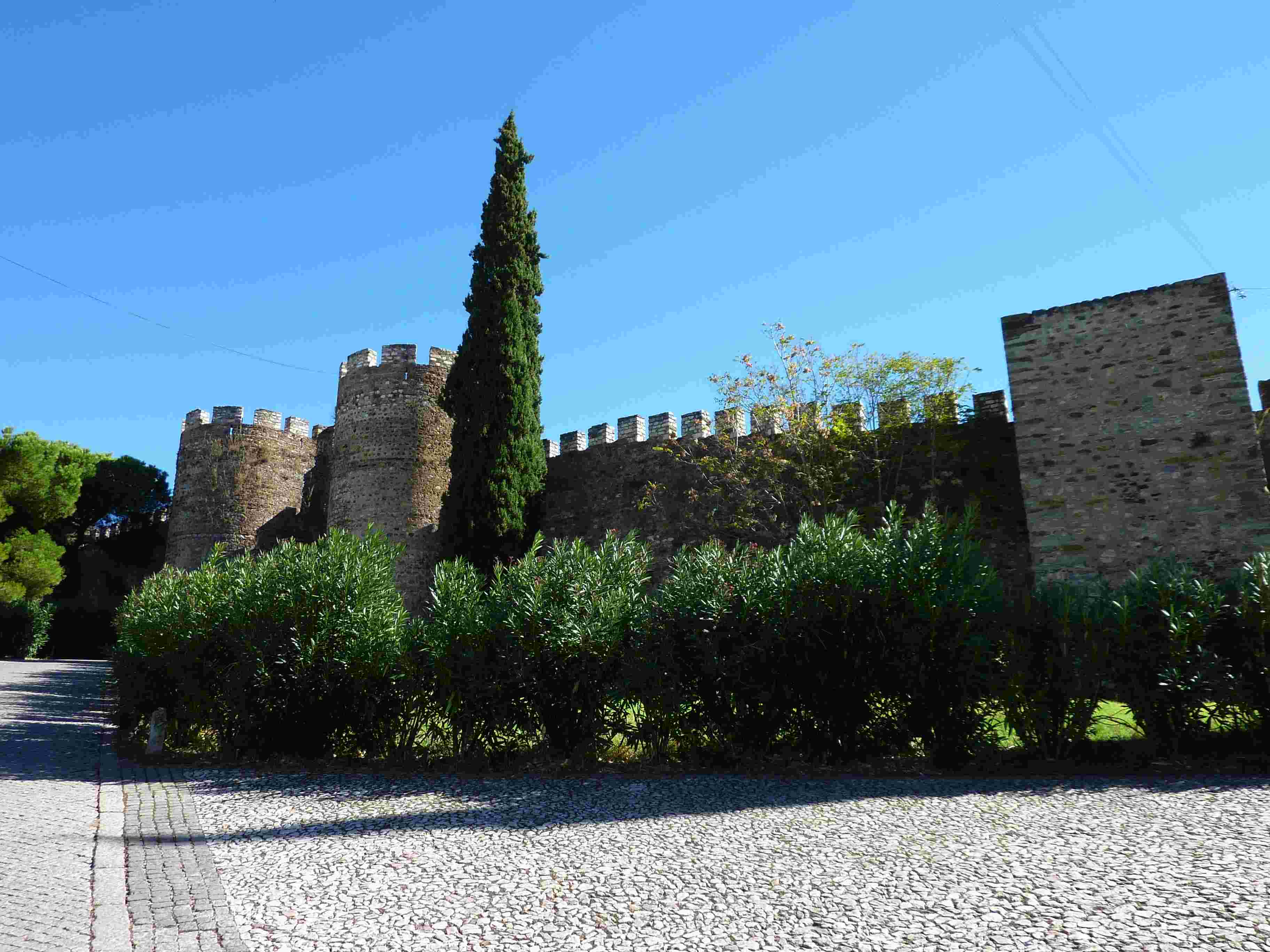 Just to the south of the Palace is D Dinis´hilltop castle which was where the Bragança family  lived before the palace was built. The castle has been transformed into the Museu de Caça (Hunting Museum) and on display are the royal trophies from the 1 700 hectare Royal Hunting Ground (Tapada Real) to the north of the town.

The dukes of Bragança are descended from the illegitimate children of D João I Mestre de Avis. The first duke, D Afonso, chose Vale Viçosa (as it was then called) for his home in the 15th century and the second duke, D Fernando, began to consider the town as the seat of his ducal court.  The third duke, D Fernando II, was executed for treason, and the town again became important during the life of D Jaime, the melancholic fourth duke when Vila Viçosa became the flourishing court of the wealthiest aristocrat in the land.  Bragança claims to the throne were played down when King Philp II of Spain became king of Portugal in 1580, but were crucial to the restoration of Portuguese independence as the reluctant eighth duke assumed the Portuguese crown as D João IV.  He and his successors regarded the Palace as quiet holiday home where they could hunt and shoot, but the Palace´s sparkle and importance as the alternative court had disappeared.

D João IV took away from the palace many valuable works of art and beautiful furniture to decorate his new home in Lisbon. Some works were destroyed during the Lisbon earthquake of 1755 and many remaining Bragança treasures were shipped to Brazil when the Portuguese court fled there in 1807.  The ducal palace is however still worth a visit as a museum of art and architecture and for its library of 5000 books.  The private apartments retain an eery fascination because of the toiletries, knick-knacks and clothes left by D Carlos I and his wife, D Amélia who left in great haste for Lisbon on the morning of 1 Febrary 1908. The king and his elder son Luís Filipe (the 22nd and 23rd dukes of Bragança) were assassinated later that afternoon in Lisbon and two years later the monarchy was overthrown.  The Dowager Queen Amélia was unwilling ever to visit again this favourite house of her deceased husband.

Vila Viçosa was not lucky for the Braganças.  The third Duke, D Fernando II, had been executed in Évora in 1483 on the orders of his brother in law, D João II, because he was implicated in treasonable correspondence with the Catholic Monarchs.  In a fit of jealous rage on 2 November 1512, the fourth duke, D Jaime, murdered his wife, D Leonor de Gusmão.  He was suspicious that she was having an affair, and when he caught a page boy climbing into the window of her quarters at the Ducal Palace, ´with five slashes he ripped out her life´. The page boy was having an affair with one of her ladies in waiting, and the murdered Duchess was innocent.

D Catherine of Bragança, daughter of D João IV, was born in Vila Viçosa in 1638.  She was not blessed with good fortune.  She married Charles II of England but was disliked by the English because of her Catholicism, her inability to produce an heir to the throne and her poor spoken English.  Her matrimonial life was not happy since King Charles flaunted his less than discreet mistresses, and Barbara Castlemaine was already pregnant with his child on the day when the King married Queen Catherine.  The Queen´s  legacies to England were the ports of Tangier and Bombay; everyday use of the fork and she also popularised in England the Portuguese custom of drinking tea.

One of Portugal´s famous painters, Henrique César de Araújo Pousão, was born in Vila Viçosa on New Year's Day 1859.  He studied at the Fine Arts Academy of Porto and graduated with excellent grades and numerous prizes, went on to study at the Fine Art Academy of Paris and he moved to Italy when he developed tuberculosis.  The climate of Rome, then Naples and Capri did not help and he returned to Portugal to die at the age of 25.  Much of his best work is exhibited in the National Museum Soares dos Reis in Porto.  He was incidentally uncle to the Olhanense poet, João Lúcio.

The Vila Viçosa poet and precursor of the Portuguese feminist movement, Florbela Espanca, fared a little better, reaching the age of 36 before she committed suicide in 1930.  She had earned a degree in literature in 1917 and then became the first woman to enrol at the law school of the University of Lisbon.  She led a very complicated matrimonial life, being married three times, but was sadly unable to bear children.

Bento de Jésus Caraça, born in Vila Viçosa in 1901, was an influential mathematician, economist and statistician.  He was also a militant member of the Portuguese Communist Party and he was a well known agitator against Salazar´s fascist regime. Detained by the PIDE and imprisoned in 1946, he succumbed two years later to a heart attack. 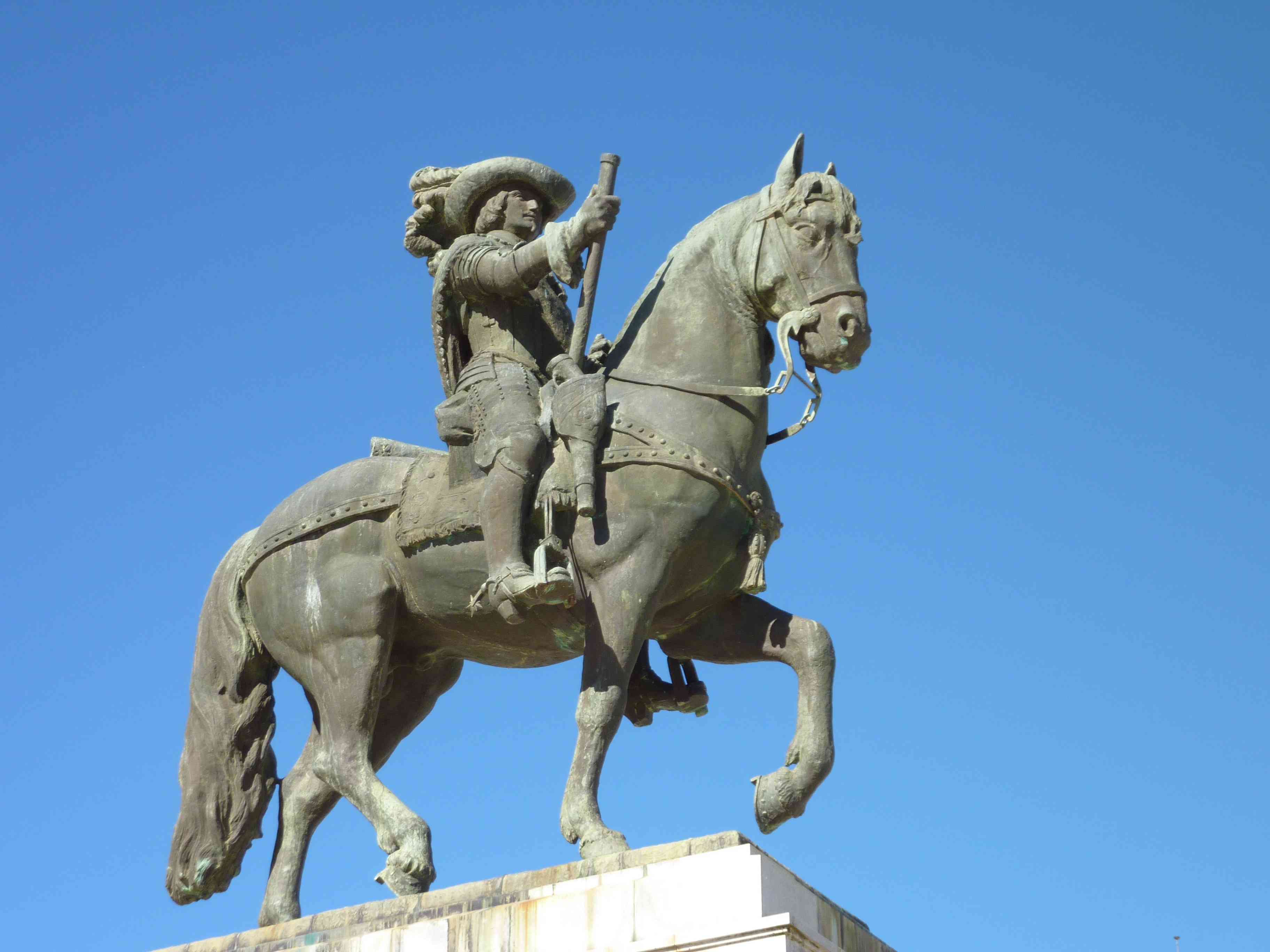 Before we leave Vila Viçosa we have a last chance to visit the Palace Square (Terreiro do Paço). Here is the statue of D João IV, the work in progress which Duarte Pacheco inspected before his fatal return trip by car to Lisbon when his car crashed at Vendas Novas on 15 November, 1943).

At right angles to the Palace is the Convento das Chagas de Cristo founded in 1514 as a mausoleum for the Ladies of the House of Bragança and a convent for unmarried Bragança daughters. It is now a pousada. The 16th century cloisters house an armoury museum and the stables are now a coach museum. Opposite the Palace, the Convent of Santo Agostinho has a magnificent church which contains the pantheon of the dukes of Bragança. One tomb has been left vacant, awaiting the mortal remains of D Duarte, brother of D João IV, who was born in Vila Viçosa and became a marshal of the German Empire. D Duarte was betrayed to the Spanish after the Restoration was proclaimed on 1st December, 1640, and died imprisoned in Milan.

José Saramago relates in Journey to Portugal that one of the last things he saw before he left Vila Viçosa was an enlarged photograph of a document signed by the great humanist philospher, Damião de Góis, a few weeks before the Inquisition seized him.  The last thing we experienced before we left the town was the ice-cold winds of the Levante blowing through the window casements and curtains of our hotel room or was it the restless spirits of the Bragança family?  If you are looking for a Christmas break with a difference, a night or two around the haunts of Vila Viçosa would be just the thing!