Journey to Portugal 11: Almeida: Star of the Beira Alta

The border between Spain and Portugal was finally agreed at the Treaty of Alcanizes in 1297 and is reputed to be the earliest of modern Europe´s fixed borders. Yet the borderlands have always been areas of dispute and the castles and fortresses on the skyline give the sense that border people had to fight to keep their land.  That energy and tension may be felt today in the sense of pride in the towns and villages that dot Portugal´s eastern border with her Spanish neighbour.  Almeida was only one of a string of medieval fortifications in this area which include Castelo Bom, Castelo Melhor and Castelo Rodrigo.  There is nothing left of the medieval Almeida.

In my three visits to Almeida, I have been amazed at the seeming lack of pride in this remote plateau area of the Beira Alta.  Ciudad Rodrigo, Almeida´s twin Spanish counterpart only 20 miles away, has an upbeat air and the difference between the two towns could highlight some of the differences between the characters of the peoples of the two countries. Spain does not appear to miss any opportunity to encourage people to find out about the past.  By contrast, Almeida has a downtrodden feel to it. Portuguese national pride is evident in football but appears to be lacking elsewhere.  In his recent book The Portuguese A Modern History Barry Hatton suggests that Portuguese attitudes are rich in bairrismo which may be translated as parochialism.   Portugal´s only literary noble laureate in his Journey to Portugal has nothing positive to say about many places, including Almeida. What do we learn about the national psyche from this fact? 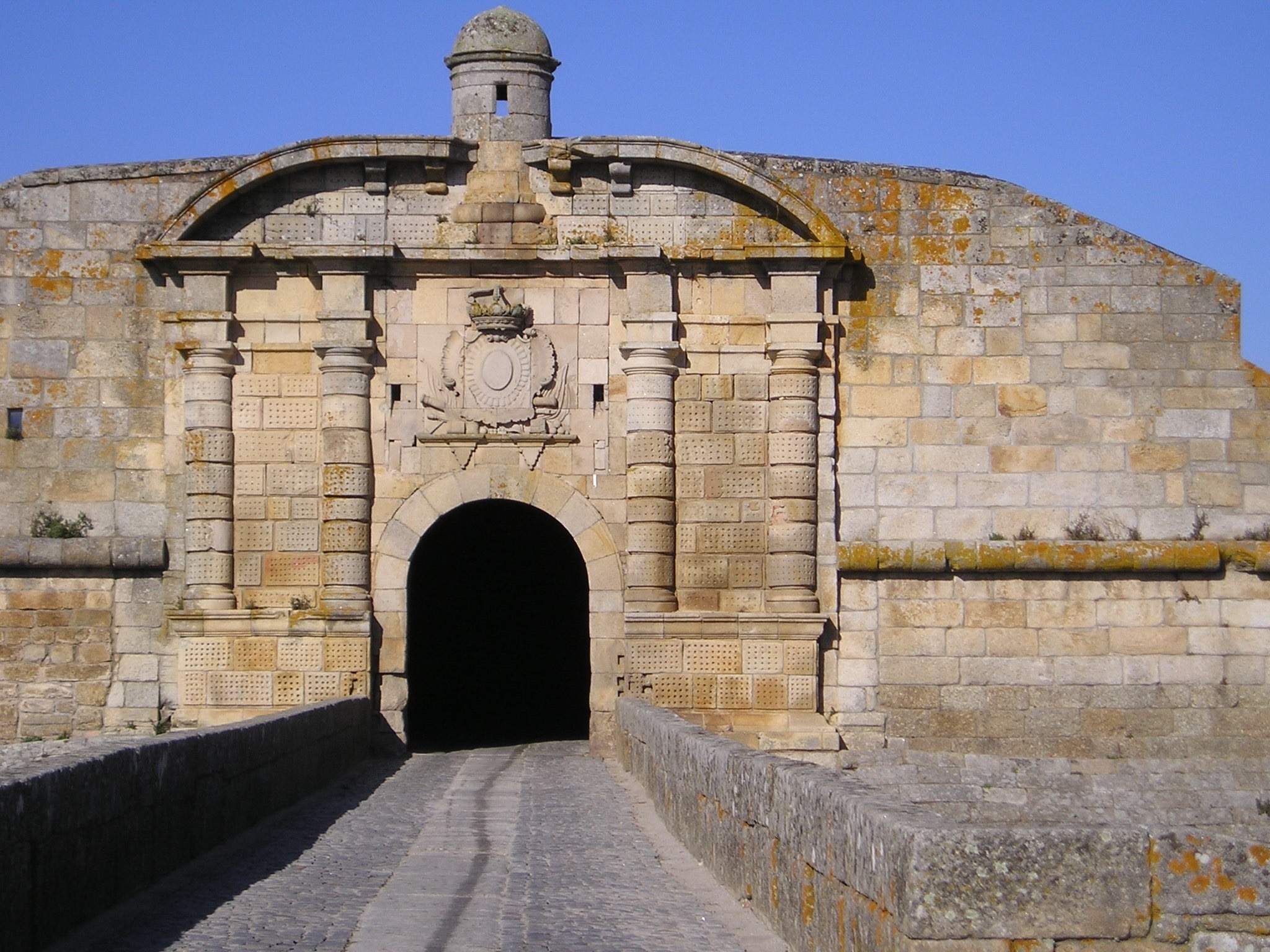 José Saramago wrote in Journey to Portugal that Almeida….. is as much a museum piece as a halberd or an harquebus ... with its sober calm air.  Damning with faint praise?  In early modern times, Almeida was one of the principal fortresses guarding the entry to Portugal from Spain.  Almeida´s formerly powerful fortress is in the form of a 12 pointed star, a design influenced by the French military architect Vauban and its reconstruction must have required an immense investment in the local economy.  Its renewal was begun after the Restoration of 1640.  This fortress holds a very special place in the annals of the history of the Peninsular War and there are fortresses of similar construction at both Valença and Elvas

Wellington´s troops had defeated the French at Talavera in July 1809 and it was not until 1810 that Napoleon delegated to Marshal André Masséna a fresh effort to eject the British from Iberia. The enormous Armée de Portugal with 60 000 men attacked Ciudad Rodrigo and within 5 weeks captured the fortress on 10 July, 1810.  The French then engaged the British rearguard under General Black Bob Craufurd at the bridge over the RIver Côa.  The British had a lucky escape and Almeida was left exposed to the might of this French army.

Inside the fortress, British Brigadier William Cox commanded  5 000 Portuguese and British troops and had at his disposal 96 artillery pieces.  The fortress was well provisioned and was capable of holding out for months but its defences were never put to the test.  On 28 July, only three days into the siege, a French shell by chance ignited spilt powder which in turn blew the powder magazine. The consequent explosion sent the castle, the cathedral, half of the town and 700 Portuguese and British soldiers sky high. Even in this desperate situation, Cox was all for holding out but Portuguese officers asked for terms and the townspeople, well aware of the awful consequences of a fortress being taken by force, demanded that the fortress be surrended.  The senior Portuguese officer who negotiated the surrender was later court martialled in Lisbon and executed.

As Marshal Masséna retreated out of Portugal, Almeida was again besieged, but this time by the Anglo-Portuguese.  Masséna abandoned his plan to relieve the French defenders as the fortress had become more of a liability than an asset.  He ordered a withdrawal and a series of explosions again rocked the town surprising the sleeping Anglo-Portuguese! 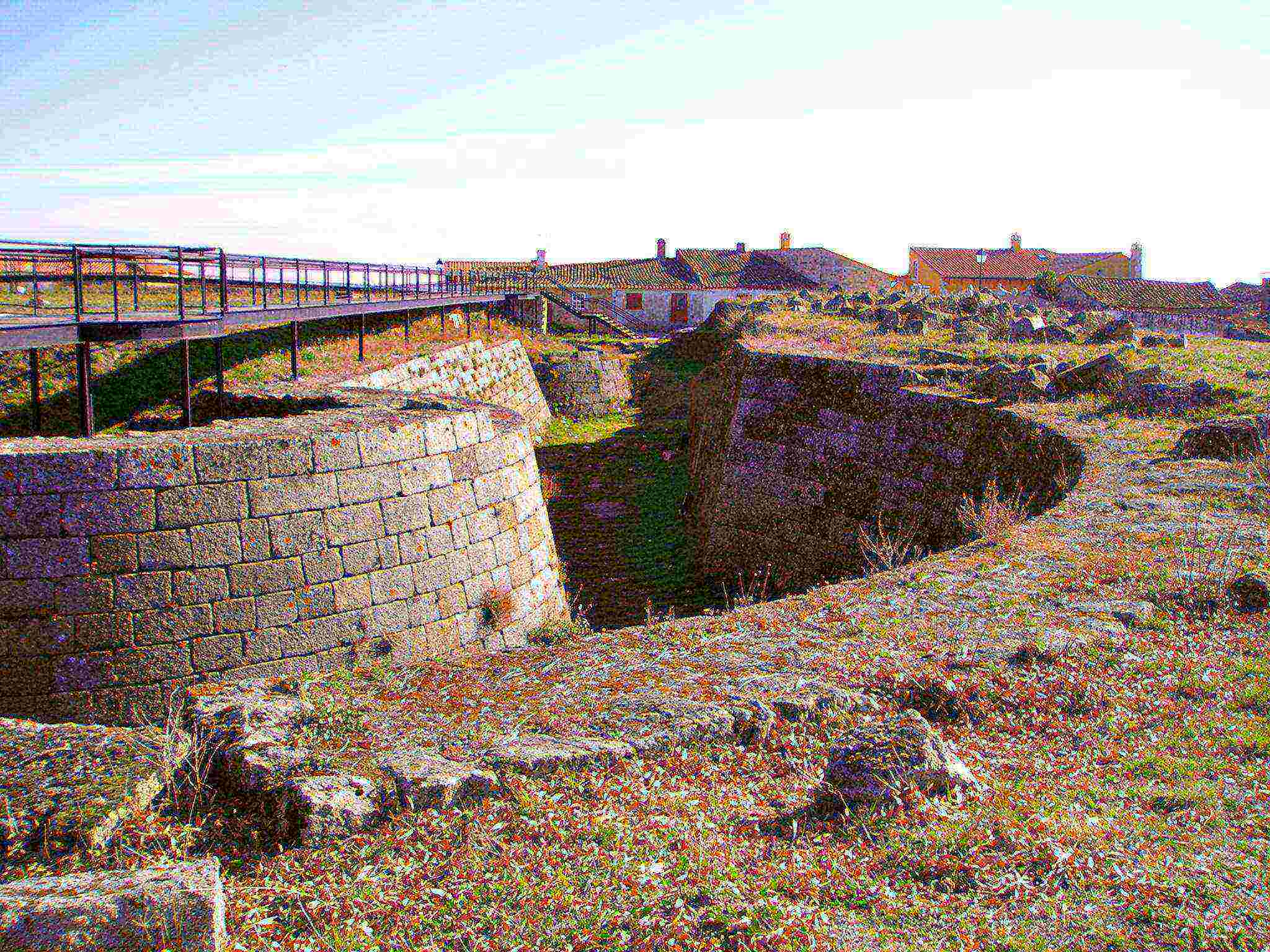 The fortress is now visible only at ground level.  The ditches and star shaped fortifications are still there, but the massive explosion took most of the above ground masonry with it.  As we stood on the new walkways to survey the ruins, we found it difficult to imagine the force of the explosion and it is also difficult to believe that anyone survived. 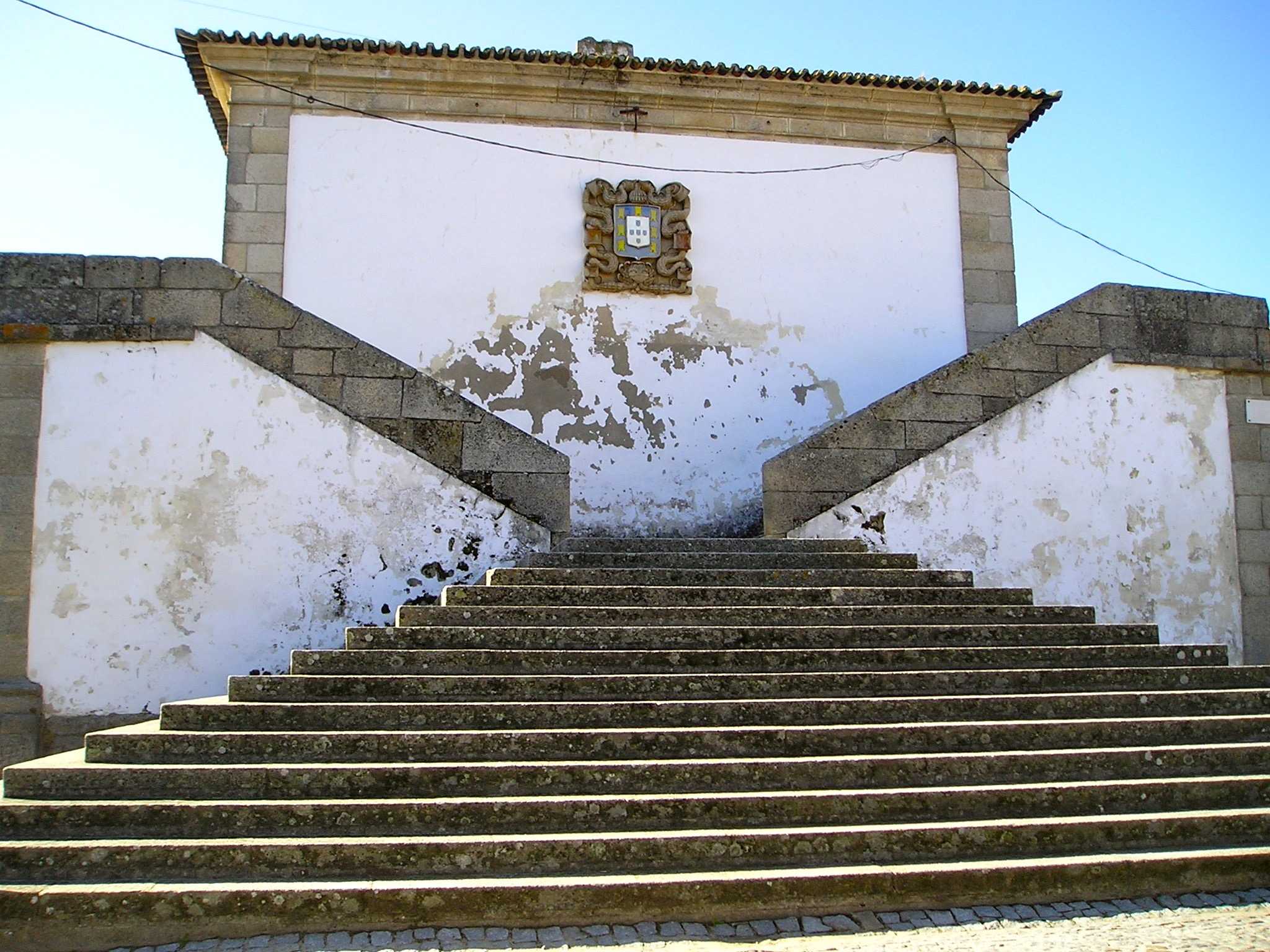 Far away from the centre of the explosion there is an eighteenth century barracks. 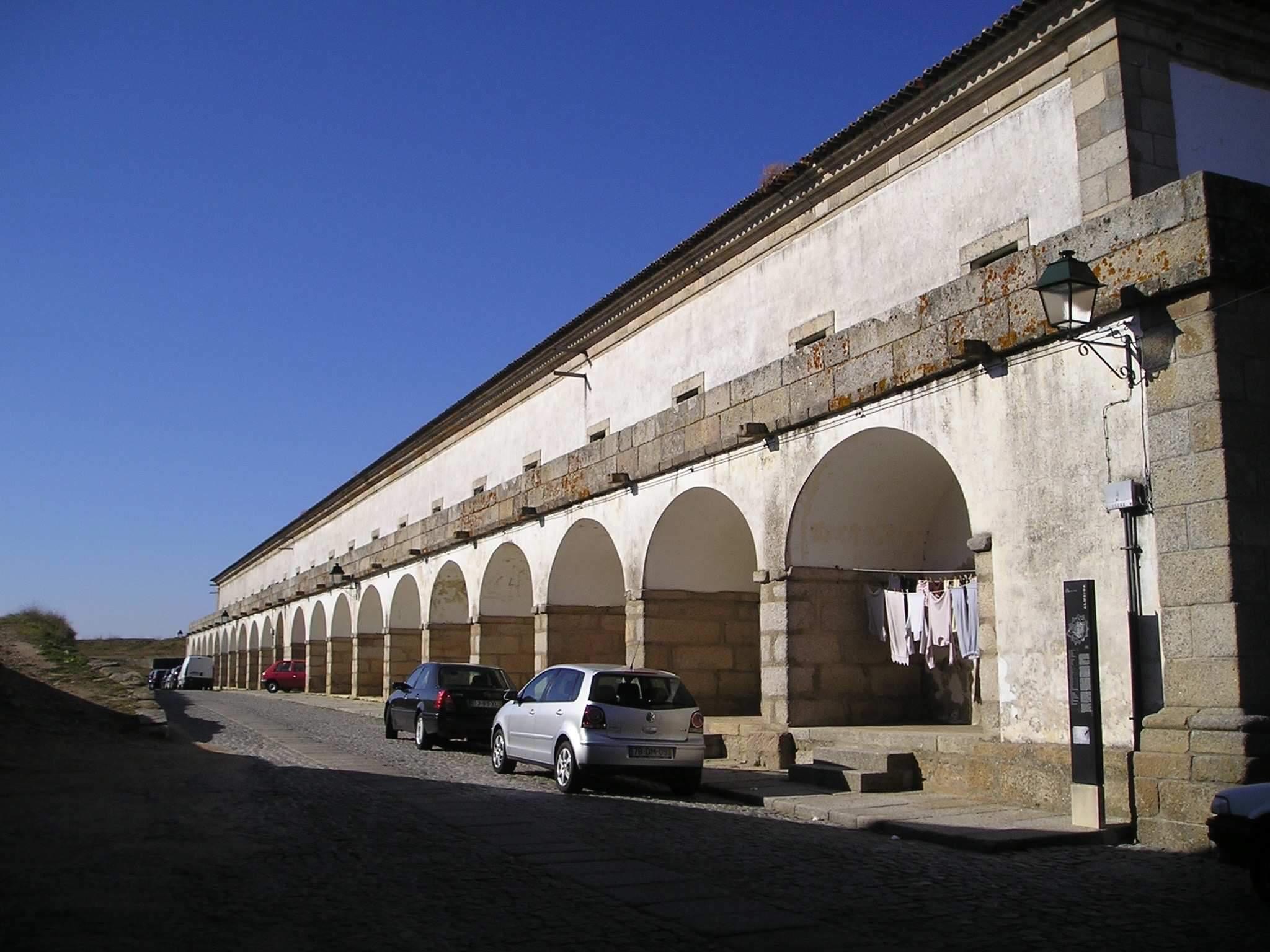 It is clearly still used as social housing, and has an unfortunate dilapidated air.

The 1994 Rough Guide to Portugal reported that tourism was catching up with the place and that the new Pousada, opened in 1986 had brought a stream of rich tourists and foreign ministers to fork out more than a villager´s weekly earnings to ride in a souped-up pony cart .  And that the number of cafés where people paid through the nose for a coffee on the balcony overlooking the humble dwellings below had risen from three to more than a dozen.  It must have been a very short lived phenomenon:  when we visited Almeida again earlier this year, we found that the new Pousada had been sold and the more than a dozen cafés have also disappeared.  The only café we found open was a tiny backstreet establishment.  The coffee was good and the people were friendly but surprised to see two visitors wandering around their town in January. The larger Ciudad Rodrigo had been lively, full of information and proud of its heritage.

Somehow tourism in the remote parts of Spain succeeds, where in Portugal it doesn´t.  The Portuguese have a fascinating history and one to be proud of.  I for one would like to see Portugal make more of its border history to take advantage of the grey tourists that the baby boomers have now become.