Journey to Portugal 10: Castelo de Vide: In the shadow of Marvão

It is possible see the castle of Marvão on its peak from Castelo de Vide and Marvão enjoys a truly panoramic view of the borderlands.  The Rough Guide to Portugal 1994 notes that ´Beautiful as Castelo do Vide is, Marvão surpasses it´.  Indeed the views from the walls of Marvão are spectacular and the eyrie style setting of the village is quaint.  On the other hand, I have always had a soft spot for Castelo de Vide, thinking of it as ´the Harrogate of Portugal´until I turned to my mentor, José Saramago.  In his Journey to Portugal, he shows that the people of Castelo de Vide refer to their town as the Sintra of the Alentejo. Such a reference is a mark of inferiority, since it is doubtful if the people of Sintra would refer to their town as the Castelo de Vide of Estremadura. 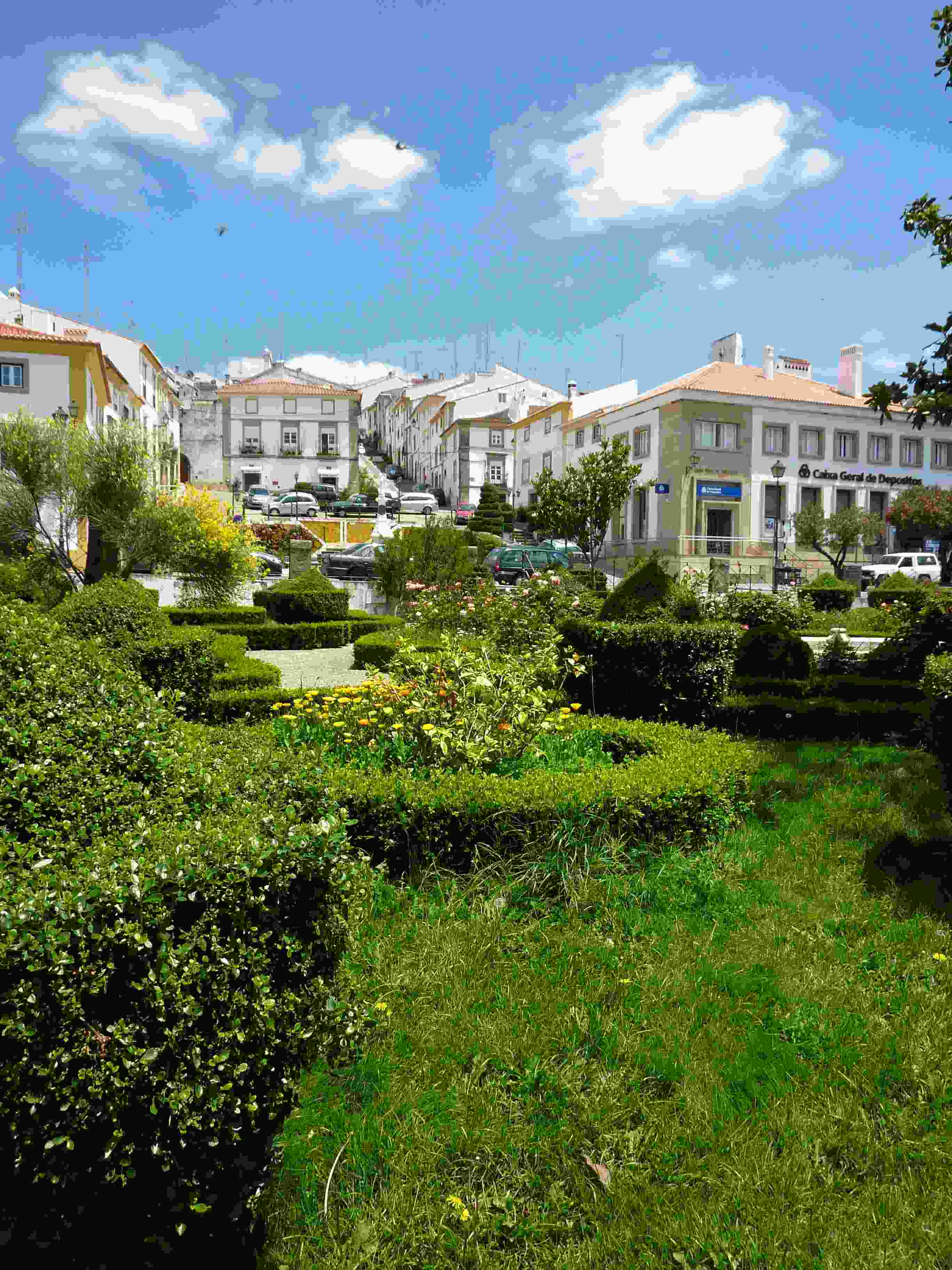 Aveiro is often called the Venice of Portugal, but no one in their right mind would refer to Venice as the Aveiro of Italy, nor would they call Rome the Braga of Italy.  Nevertheless, the genteel nature of the town, the monumental buildings, the ubiquitous flowers, the health-giving waters and the attractive coffee shops would not be totally out of place in Harrogate! 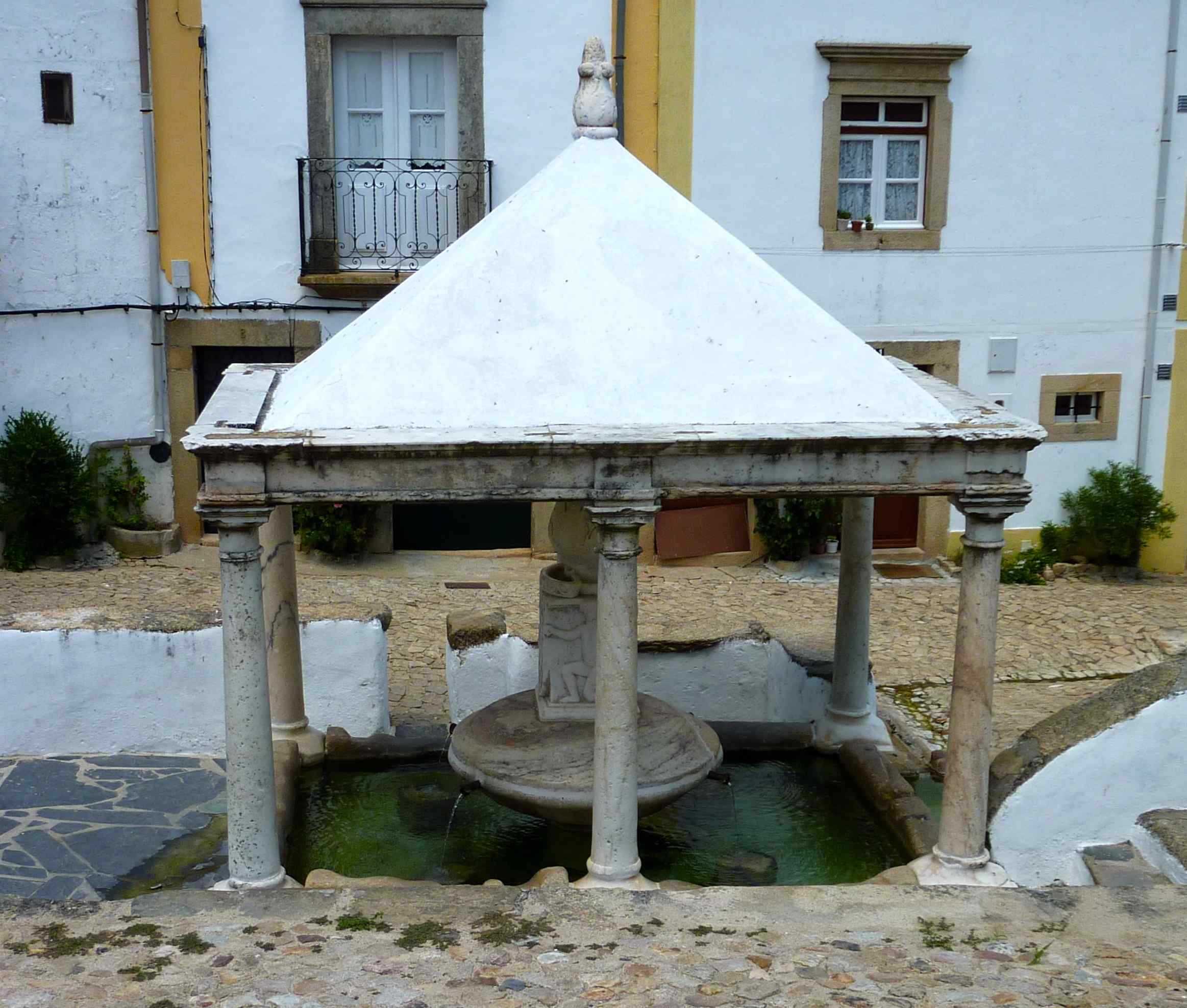 Castelo de Vide lies at the northern tip of the São Mamede National Park, home to Egyptian and Royal vultures and Europe´s largest bat colony.  Because the area´s 300 springs are renowned for their medicinal properties, perhaps the town should have been named Castelo da Vida! The famous Fonte da Vila is to the north of the main square and it is a source of Castelo de Vide´s famous mineral water.  The Fonte is of unusual design in thatits roof is supported by six marble columns and the water gives out from four spouts in the central urn. The spa is next to the Fonte and opens in the summer months for medical treatment; the water is said to be good for diabetes, kidney and blood pressure problems.

The Romans built a settlement on this site, on the main route from Mérida to the west coast.  The Portuguese town received its first charter in 1180 and a further charter from D Dinis in 1310.  In return for the privilege of not supplying recruits to the royal army, the town undertook the responsibilty for its own defence.  D Afonso III gave the lordship of Castelo de Vide to his younger son, who  promptly decided to build defensive walls around the town to establish his claim to the throne.  D Dinis, the elder brother was not pleased.  By chance Portuguese ambassadors on their way to confirm D Dinis´wedding arrangements with Princess 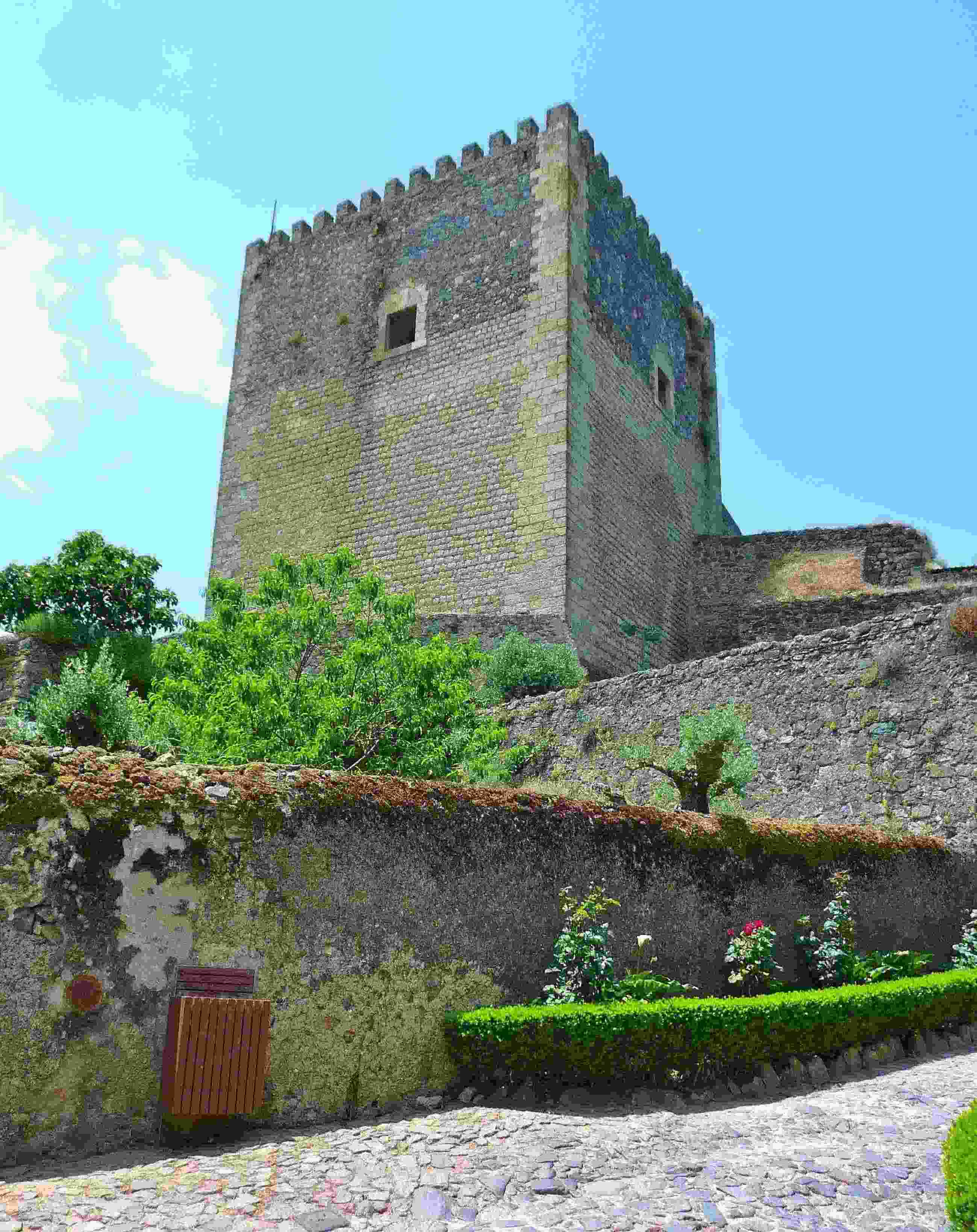 Isabel of Aragon were passing through the town, and were able to settle this potentially damaging dispute.  When he succeeded to the throne, D Dinis strengthened the town´s defences.  Not before time, because Castelo de Vide, being so close to the Spanish border, suffered many attacks and the walls needed repair on numerous occasions. Tradition states that there was an enormous vine on the site where the castle came to be built and it may be that the owners of the many houses still within the castle perimeterseek to benefit.

A local historian describes Castelo de Vide as a small medieval town and modern small city.  Its national importance is signified by its designation as a Centro Histórico Notável.   As well as its castle, the defensive walls are 2.5 km in circumference, small sinuous streets and a remarkable Judaria.  Jews settled in Castelo de Vide in the 13th century and the synagogue, which now houses a tiny museum, is reputed to be the oldest in Portugal. It lies halfway down one of the steepest streets in the country. 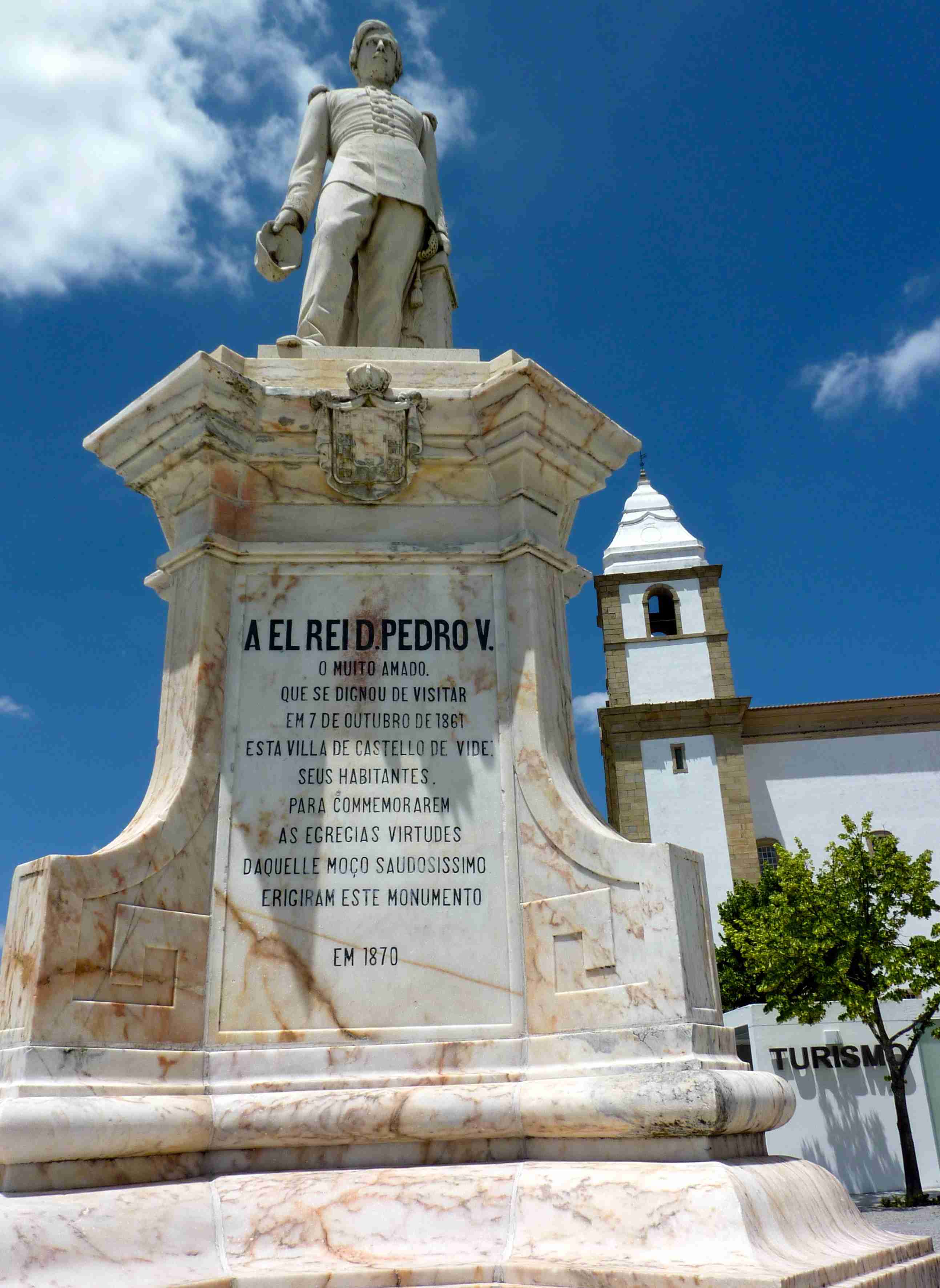 In the Praça D Pedro V there is a fine marble statue of this popular king and the huge Igreja Santa Maria da Devesa dominates the space around the pelourinho (or whipping post). Head north from here to the Judaria and the castle and then back south eastwards to find those beautiful coffee and cake shops before you start exploring the surrounding areas.

Just south of Marvão on the Portalegre road lies the small village of São Salvador de Aramenha which contains the site of Ammaia, the most important Roman archaeological site in the northern Alentejo. Within its 25 hectares there are: a forum and temple, baths, walls, two towers, the gates of the town and some remains of the houses.  The attendant museum was restored between 1999 and 2001 and displays coins, pottery lamps, glassware and jewellery.   Castelo de Vide is also famous for older archaeological remains: there are 28 megaliths and 2 menhirs in the parish.

To the west of the National Park are a number of interesting towns.   Nisa, with the remains of its castle walls and its Portas da Vila and Portas de Montalvão;  Crato, whose illegitimately born Prior, D António I, briefly occupied the throne in 1580 and for holding off a Spanish invasion during the war of restoration. Vengeful Spain paid out Crato bravery  by destroying its castle,  sacking the town and burning of all the documents in the archives of the Order of Malta - an immense loss.

To the north of Crato at Flor da Rosa is the restored monastery of the Knights Hospitallers.  It has recently been adapted as a magnificent pousada.  The Crato tourist office is housed within the pousada and if the importance of the place is determined by the number of staff it contains (there were four) then this place must be very important indeed!   An underlit display shows the history of the monastery and do not miss the marble tomb of D Álvaro Gonçalves Pereira, the famous Prior of the Order of the Hospital and father of the even more famous Portuguese hero D Nun´Álvares Pereira.  D Nu´Álvareswas of course canonised as St Nuno of Stª Maria as recently as 26 April 2009 and his statue stands in the village street. Just to the south of Crato is Alter do Chão which was also on the Roman route from Mérida to Lisbon.  It has a 14th century castle and  a stunning renaissance fountain erected in 1556 by the Duke of Bragança.

After a range of history from megalithic times, through Romans, Visigoths, medieval knights and kings, a return to the coffee shops in the flower laden streets of the ´Harrogate of Portugal´ will be just the thing to give time for reflection about the area´s colourful past and its present civic pride.