Journey to Portugal 8: Mourão and its Unique Moorish Chimneys 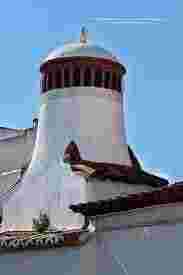 José Saramago and the Câmara Municipal of Mourão agree on the town's main claim to fame - its chimneys.   ... here the chimneys began, round and with conical tops.  They are found almost nowhere but around these parts, ever the same yet never monotonous, their whitewashed faces forever reflecting the chromatic scale acquired by whiteness in a play of low or intermittent light, in the hard shadows or the soft twilight of a corner only touched by the light after a thousand fractures ...  writes José Saramago in Journey to Portugal.  The tourist leaflet is less poetic but it does acknowledge that the dozens of Moorish chimneys are now the town´s chief claim to a unique architectural heritage. 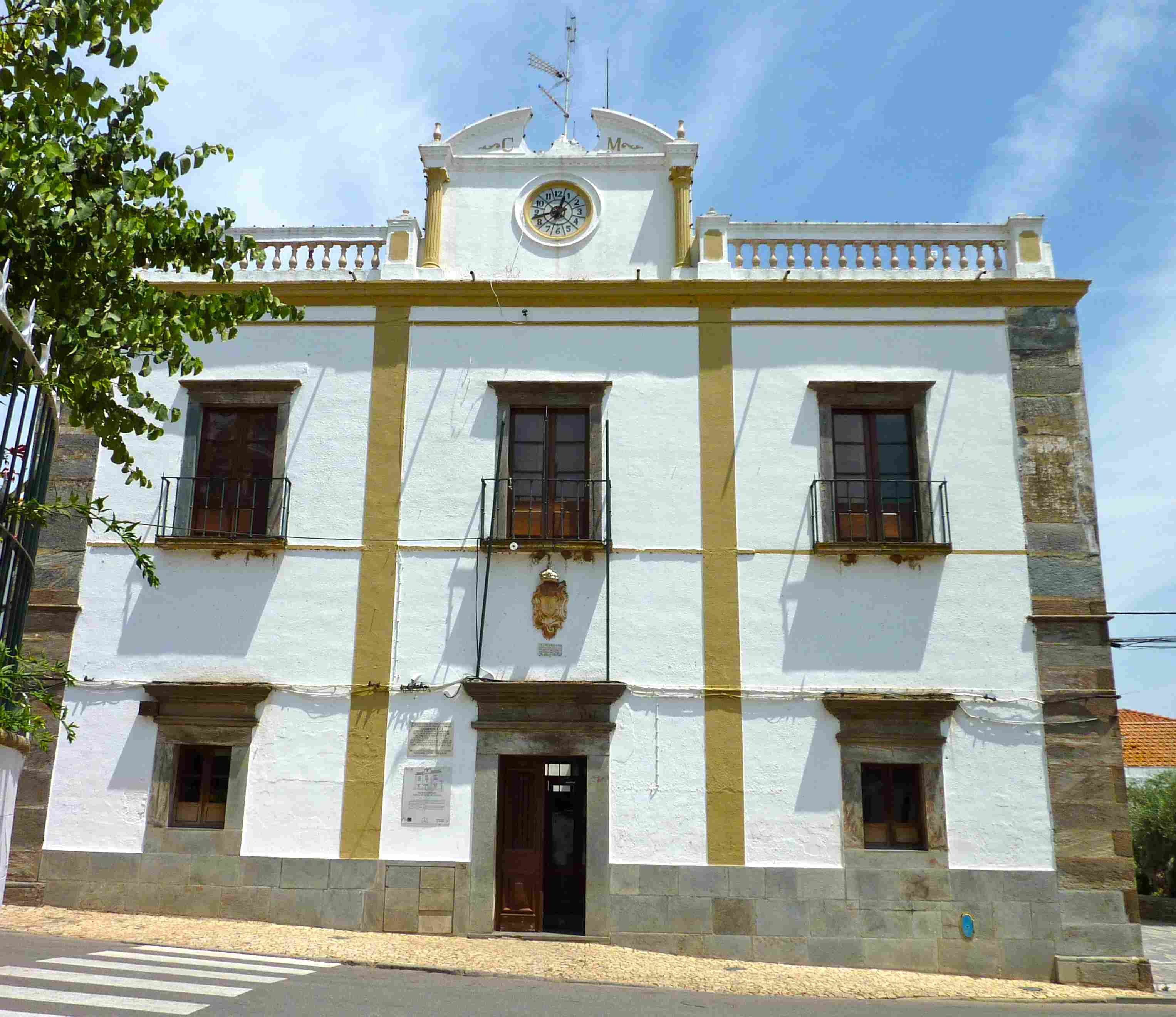 For me they are an interesting diversion to the fascination that Portugal's border towns and villages hold for me.  Even now the patriotic pride in their resistance to the Spaniard in the 17th century is almost palpable and these border towns invariably exude a quiet sense of self-assurance.  Despite Mourão´s pride in its history of resistance to the Spaniard, I found in the Posto de Turismo  a (very useful) tourist guide to Extremadura, the Spanish province just a few miles away across the border. To be explored some other time.  Today was for the castle and the town of Mourão and for the café overlooking the magnificent municipal gardens.  And not exactly a surprise, since many towns in the Alentejo are similarly served, wi-fi is available if you  are close enough to the town hall. José Saramago maintains that Mourão does not have great things to offer - that is, apart from the chimneys.  He found the castle, which incorporates the parish church, shut.  No surprise there!  It must have been a Monday. 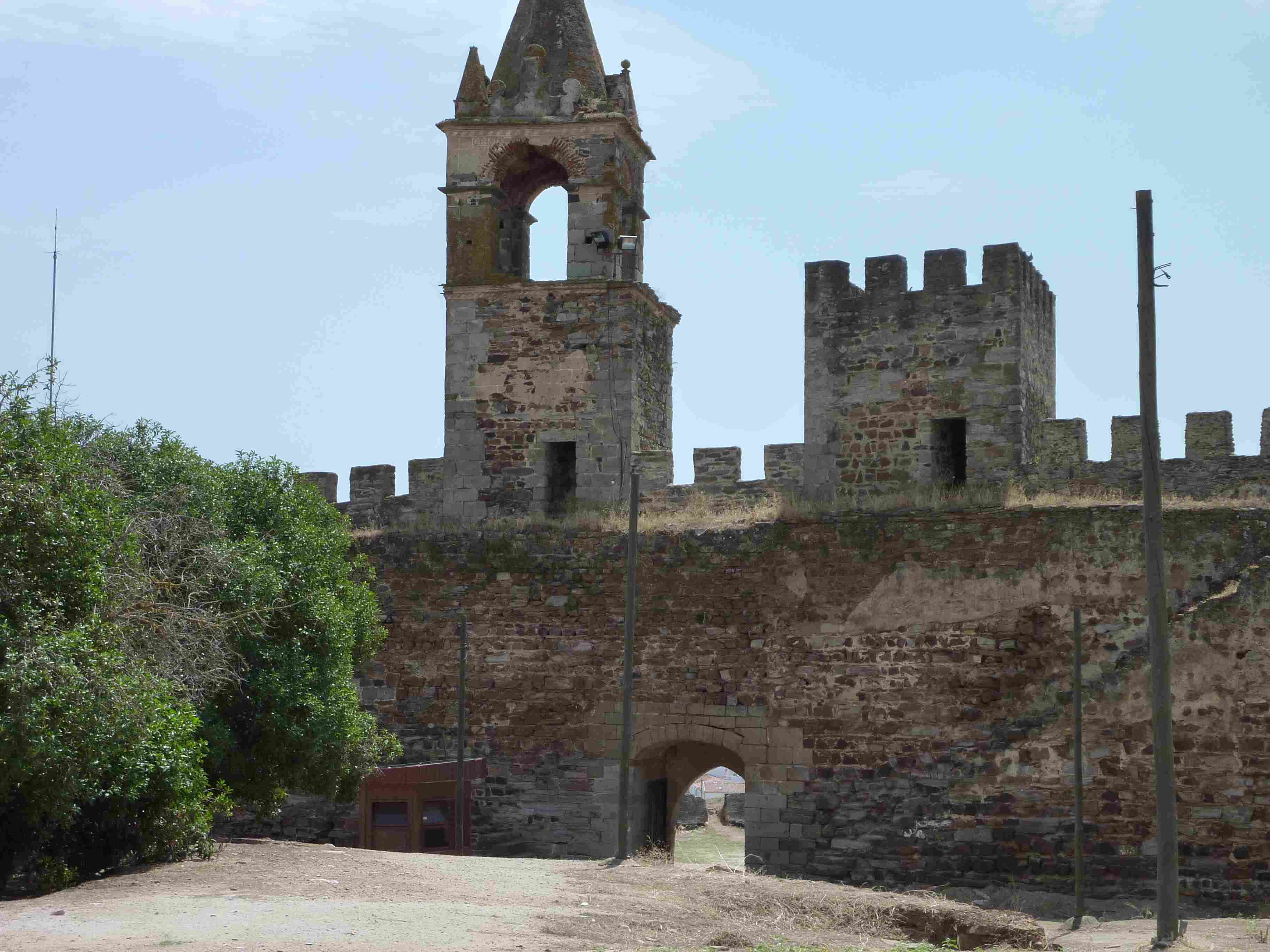 I disagree with Saramago - I think the castle and church are magnificent.  The castle bears the scars inflicted upon it during the 27 years of sieges and attacks during the War of Restoration 1640 - 1668. It was built on the orders of D Dinis, and D Manuel I ordered work to be carried out on the barbican and clock tower.  The walls of the castle proved not strong enough to keep out the Spanish when the Duke of San Germán laid siege to the town on the death of D João IV in 1656. The invaders destroyed the castle keep, the clock tower and the town. Luckily they were driven off four days later by a Portuguese army under General Joane Mendes de Vasconcelos. The castle was immediately rebuilt in the Vauban style, to withstand prolonged attack by heavy artillery.

On the site of the clock tower and gate, destroyed in the Spanish attack, they built the new parish church. Despite suffering damage from the earthquake in 1755 and two attacks by the Spanish,  miraculously the image of Nossa Senhora das Candeias survived.  Mourão is a relatively small town but it is big enough to contain a further two churches and two hermitages and there are a further two hermitages close by.  The Igreja de São Francisco was built during the reign of D João V and boasts azulejos from the Royal Factory in Lisbon.  The Igreja da Misericórdia has a marble façade from 1743 and a gold retable which owes much to the influence of Spanish art.

From Elvas to Vila Real de Santo António, most of the present boundary between Spain and Portugal is formed by the River Guadiana.  From a point just to the north east of Mourão to another point just south of Pomerão there is a chunk of land which is Portuguese even though it is on the left bank or the ´Spanish´side of the river.  No wonder this frontier zone has been subject to so much dispute!  And there is one dispute which continues to this day.  If you look for the border markings on road maps which have been printed in Portugal,  you may find that the border marking is absent between the northernmost area of the Alqueva Reservoir and the town of Senhora da Ajuda.  The reason for this absence of border marking is that the Portuguese state still does not recognise the Spanish occupation of Olivença.  The present Spanish parish of Olivenza (also on the left or eastern bank of the Guadiana) was recognised as Portuguese by international treaty, yet Spain never gave it up, and it is still claimed by Portugal.  The Friends of Olivença (O Grupo dos Amigos de Olivença) are determined to reclaim Olivenza for Portugal.

The original settlement of Mourão was located very much closer to the River Guadiana than the present town. The land was marshy, unhealthy and liable to flooding (ironically, it is now flooded permanently by the waters of the Alqueva Dam).  As is the Castle of Lousa in the Aldeia da Luz, one of the three freguesias in Mourão. This castle was in fact a fortified Roman villa and it can now be seen only on a CD-rom, and what we see at Aldeia da Luz is Portugal´s youngest settlement.  The houses of the population of 350 people, the parish church and even the football field have been copied and rebuilt 2 kilometres away from its original site - which was submerged when the Alqueva Dam was filled in the four years 2002 - 2006.

Although the town of Mourão was founded by the Arabs, its name does not refer to its Moorish foundation, but to the Moorish word mogron, meaning hollow, which might describe the location of the town.  During the Reconquista the town was besieged by D Afonso Henriques in 1166 and the Moors subsequently abandoned it.  Mourão was not reoccupied until 60 years later when D Sancho II granted a charter to Gonçalo Egas, prior of the Military Order of St John of Jerusalem, to repopulate and defend it.

Since that time, the town has been owned by the Knights Templar, by D Beatriz de Gusmão (the widow of D Afonso III), by D Teresa Gil de Soverosa (with whom Sancho IV of Castile was head over heels in love) and eventually by the Portuguese crownfollowing D Teresa´s death. 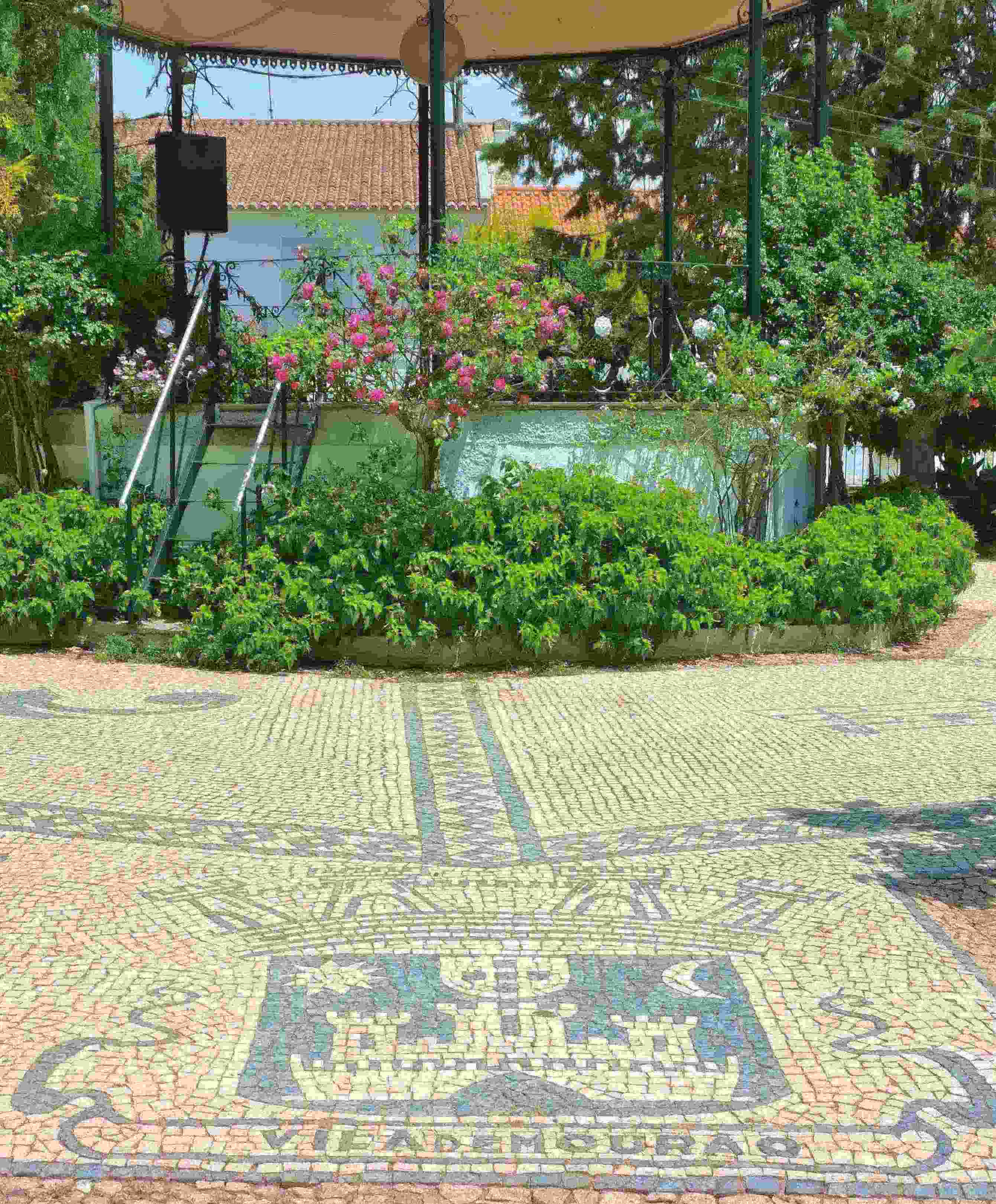 As I sat drinking my galão in the Praça da República which contains the well-kept and colourful municipal gardens, and gazed at the bandstand, the two magnificent churches on the square, the Paços do Concelho (which is apparently an old barn conversion) and at the passers by, I thought that these people have reason to be proud of keeping this little corner of Portugal from the Spanish.  And then I remembered that in the spirit of José Saramago, I should go to photograph some chimneys!