A review by Peter Kingdon Booker 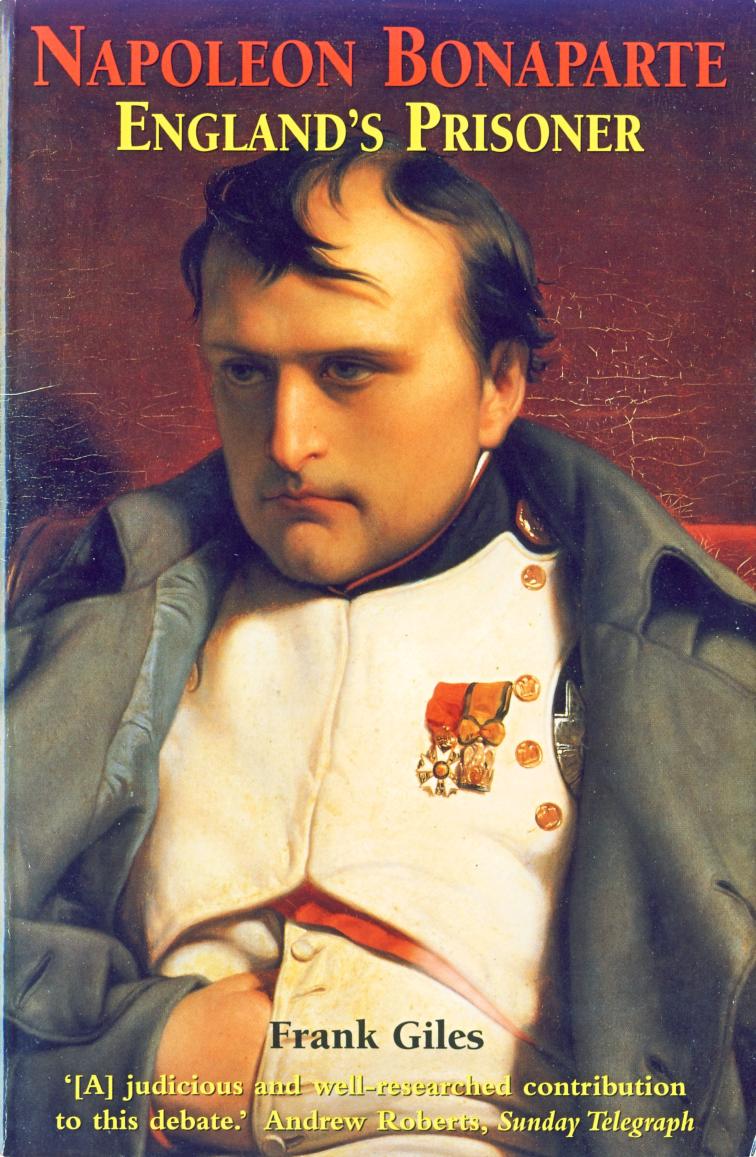 A judicious and well-researched contribution to this debate, writes Andrew Roberts in the Sunday Telegraph, and on the front cover of this paperback.  Frank Giles admits that he is not a Napoleonist at all.  Despite his superlative talents, his extraordinary career and his real achievements, writes Giles, Bonaparte did more harm than good to France and to Europe.  This judgment is one with which many Britons would agree; I suspect that many Frenchmen would disagree with it, and cite the Napoleonic Code, the metric system, religious toleration, secular education, reformed local administration etc, etc to illustrate Bonaparte´s good influence on European history.

Broadly speaking, the argument in this small book also breaks down national lines. British people tend to believe that Bonaparte received his just desserts when he was imprisoned on the island of St Helena for five and a half years until he died. His French staff and later French writers (together with the contemporary Holland House set) feel that he was cruelly served by British imprisonment, and died of poisoning by arsenic at the hand of some unspecified Briton.Sunday Telegraph, and on the front cover of this paperback.

Frank Giles admits that he is not a Napoleonist at all. Despite his superlative talents, his extraordinary career and his real achievements, writes Giles, Bonaparte did more harm than good to France and to Europe. This judgment is one with which many Britons would agree; I suspect that many Frenchmen would disagree with it, and cite the Napoleonic Code, the metric system, religious toleration, secular education, reformed local administration etc, etc to illustrate Bonaparte´s good influence on European history.

After his short reign as Emperor of Elba, Bonaparte escaped to land again in France on 1 March 1815. He had said that he would return with the violets, and British cartoonists referred to him as Corporal Violet. Defeated at Waterloo, rejected by the French political establishment, frustrated in his desire to escape to America, he gave himself up off Rochefort to Captain Maitland of the frigate Bellerophon, and expected to be allowed to live the life of an English gentleman in an English country house. Of course, he was not allowed to land on British soil, and within a month he was on his way to his island exile, aboard HMS Northumberland.

When he arrived on the tropical island of St Helena, it was the way he was addressed which caused the most problems. He insisted that he was Emperor, and that he should be addressed as such. Britain maintained that he no longer had any Empire, and that he should be addressed not by his first name, but by his surname. He was therefore General Bonaparte. The second most irksome rule of his imprisonment was that he was allowed free reign over a twelve mile radius from his house, Longwood. If he wished to go further, he had to be accompanied by a British officer. The third rule, which he often did what he could to frustrate, was that he had to be seen in person by a British officer twice daily. When he kept to the house, the officer of the watch would sometimes have to patrol outside the house for up to ten hours in order to catch sight of him.

Giles recognises that Bonaparte was irascible when crossed and that he adapted the truth to his own designs. As a really important prisoner, he might have been accorded more respect and greater comfort. But when Governor Sir Hudson Lowe offered to make alterations to Longwood to increase his comfort, Bonaparte merely ignored the idea. He therefore had only himself to blame for his discomfort.

He came cordially to dislike the Governor of the island, who had been charged with his imprisonment (or safekeeping, if you were British). He accused Sir Hudson Lowe of being not only his gaoler but also his executioner. He railed at Lowe, and insulted him. He preferred the company of other Britons. In the five and a half years that Bonaparte spent on the island, he met Lowe only six times. As far as the prisoner was concerned, Lowe could do nothing right. Punctilious in obeying his orders, Lowe was however merely the agent and not the author of the conditions of Bonaparte´s confinement.

Giles does not mention the canard that Bonaparte had to sell possessions to make ends meet, nor that he had to burn furniture to keep warm. These issues are mentioned in Wikipedia, but I suspect them of being untrue, and of being from a French source.

Nobody on the French side has ever, so far as I know, offered an alternative possibility for a location where Bonaparte might have been imprisoned. He had caused war in Europe for seventeen years, and it is scarcely calculable how many died from battle, wounds received, guerrilla activity, illness and famine brought on by war during that time. He comes very close to the modern concept of a war criminal.

And for what? For the aggrandisement of France and her European Empire, which found little favour with other Europeans. It was significant that the allies of the coalition were fully in agreement with the imprisonment of this great man on a remote island. Had he fallen into the hands of either the Russians or Prussians, he might easily have been executed.

When he returned to Britain after Bonaparte´s death on 5 May 1821, Lowe was marked for singular greeting by the new King George IV, who complimented him while shaking him warmly by the hand. But Lowe never had any other public office of importance. It was rumoured that he was not a complete gentleman. Lowe was quietly shunted off to a minor post in Ceylon, while his reputation was shredded in England. Lowe was a loyal and effective crown servant, saddled with an unenviable task which he performed to the best of his abilities, and as far as I can see, in exemplary fashion. He was then ditched by the Establishment when it suited them.

Giles presents a view of Bonaparte after Waterloo which is credible, and which is not touched with sympathy. Always portraying himself as badly done to, Bonaparte had no concept of the millions who had their lives ruined during his career. He stormed and shouted; he lied; he exercised his considerable personal charm when he wished. All to get his own way. He would not be my choice for a companion on a remote island.