Jean Barratt: A Passion for Porcelain

When I was running my fashion business, I avoided giving interviews because it always seemed like tempting fate. No longer running her business, Jean Barratt agreed to talk to me about her latest passion - collecting porcelain. Her passion for porcelain is a direct result of watching television. Whilst watching the Antiques Road Show one day, it occurred to her that she had lived in Staffordshire all her life and yet she knew very little about the pottery industry. She decided to become a collector of Staffordshire porcelain, but to avoid becoming overwhelmed, sensibly chose to collect examples from only one factory.

From the the plethora of Staffordshire pottery factories, Jean chose to begin her research with New Hall, a company which was formed in 1783 and whose production was well documented. From this documentation, she was able to identify their competitors and hence, chose a company to research, which in turn aided her to choose pieces for her collection. She chose New Hall because it was the company which pioneered the production of hard paste porcelain not only in Stoke on Trent, but in England as a whole.

The potteries of Staffordshire used local ball clay and flint and the ovens were fired with locally mined coal, but New Hall quickly established that their local clay was not of the right quality for hard paste porcelain. The production of hard paste porcelain requires china stone and china clay, which they sourced from Cornwall.

English manufacturers were attempting to copy what the Chinese had achieved over 400 years previously, and what had been discovered at Meissen in the mid eighteenth century. They referred to hard paste porcelain as a "new gold" because its whiteness and transluscency made it exquisite and desirable. It would therefore be very useful for both tea and coffee services. The first hard paste recipe used at New Hall was discovered in 1765 by William Cookworthy, a Devon Quaker who had used his knowledge of chemistry to deduce the recipe after experimenting in his back garden.

Jean´s passion took her all over England as she scoured the antique auctions for pieces to add to her collection. It is like a drug said Jean. I don´t recommend that anyone should start collecting, because once you start you just can´t stop. She buys her pieces for aesthetic reasons and for research purposes but she added that the number of pieces on the market had declined in recent years as more and more people had become collectors. Jean attributes the growth of collecting porcelain to the popularity of the Antiques Road Show. Because people are buying and selling more on eBay, it is now possible for Jean to indulge her passion from her home in the Algarve.

Once Jean´s interest had caught fire, she realised that she had become a member of a community of collectors. Other collectors had interests in the products of different factories, and so they are not necessarily competitiors for the same pieces. She and a few others set up a society that would produce a newsletter, New Hall and Friends; the ‘friends’ being modern day collectors as well as New Hall’s competitors. Later Jean went on to write a book about her chosen factory, one of New Hall’s competitors, a previously undocumented factory. (A & E Keeling, Shapes and Patterns on Porcelain) The factory´s fame has spread and Jean assures me that she knows collectors of New Hall and Keeling pieces who live as far afield as Australia and the USA. 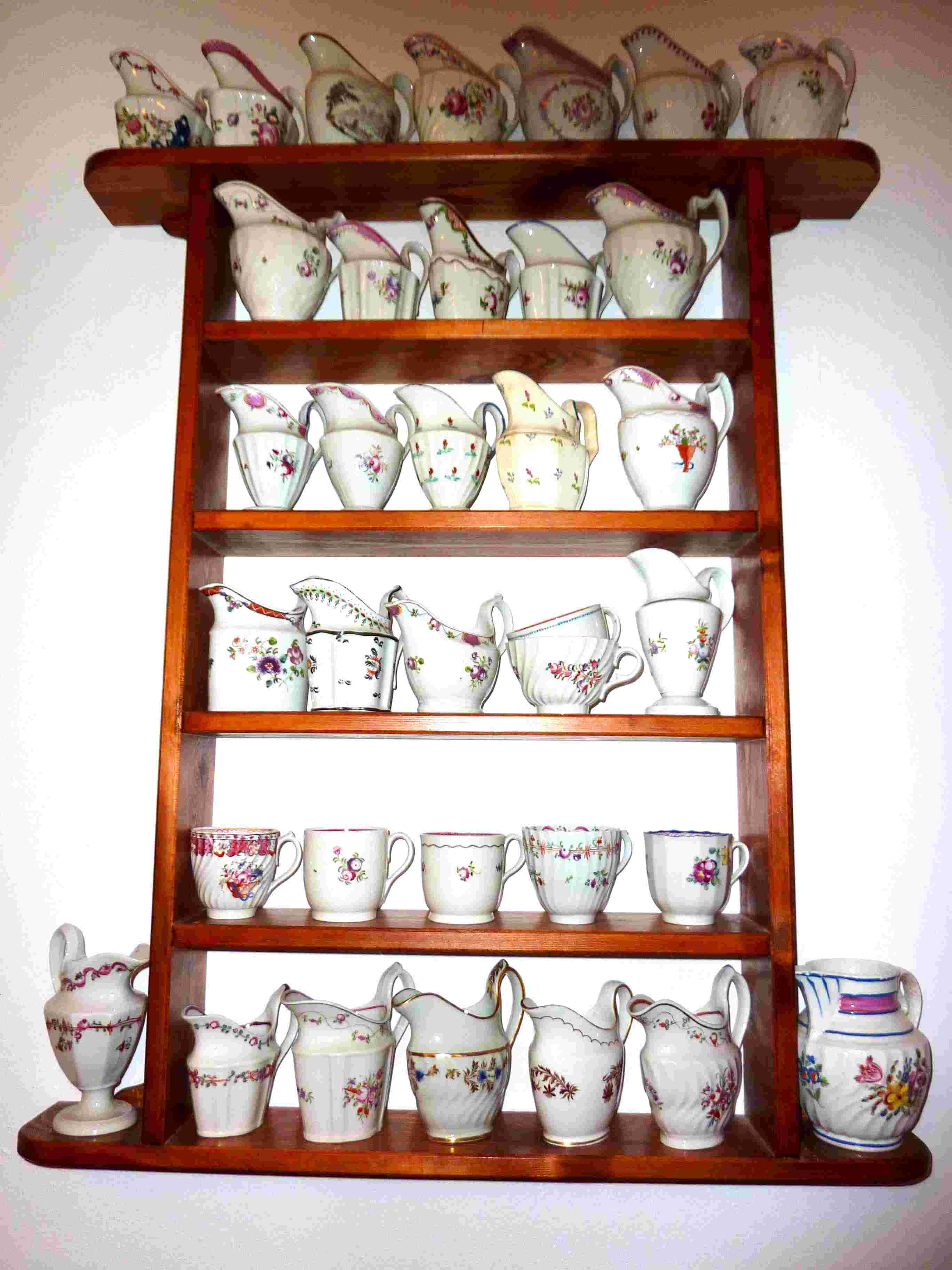 Jean moved to Portugal three years ago for the good of her health, and so that she and David could enjoy the sunnier climate of the Algarve. She is gradually moving more and more of her collection from the UK to their house in Portugal and each time she returns from the UK, she brings another suitcaseful of pots. She has already 200-300 pieces on display in her home near Moncarapacho for her own pleasure and a further 200 or so pieces awaiting transport from the UK. Luckily her husband David is a handyman so he has been able to build enough shelves for her to display her milk jugs, cream jugs, teapots, cups, saucers and teabowls. As we discussed the pieces, she handled them in a matter of fact way, and she is quite philosophical about handling them, much more so than I was.

There is another book in production, said Jean, but it is a winter job. The weather here is too good to be inside all day. Although I do keep a close watch on eBay everyday. Jean communicates the passion which she feels for her collection, and for the importance of the founders of the New Hall Factory who transformed the habits of English society. All of the English porcelain we use today is descended from the efforts of the New Hall entrepreneurs who created a hard paste porcelain which would not crack when boiling water was added. The porcelain made by New Hall was not as hard as that invented by the Chinese but it was good enough not to crack from the effect of English tea. In the late eighteenth century, taxes on tea were reduced and increased on silver so that a demand emerged for fine china for tea services. What could be more attractive than sitting by a fireside with a table set out with a matching tea service? asks Jean. I have offered to make a cake should I receive an invitation for Afternoon Tea. We think of Catherine of Braganza as the unlucky and unproductive queen of Charles II, but we have to thank her for introducing a civilised habit to the English. Not that of drinking tea, which they had been doing for some years by the time of her marriage. But for the habit of taking afternoon tea, which she brought to England from Portugal. 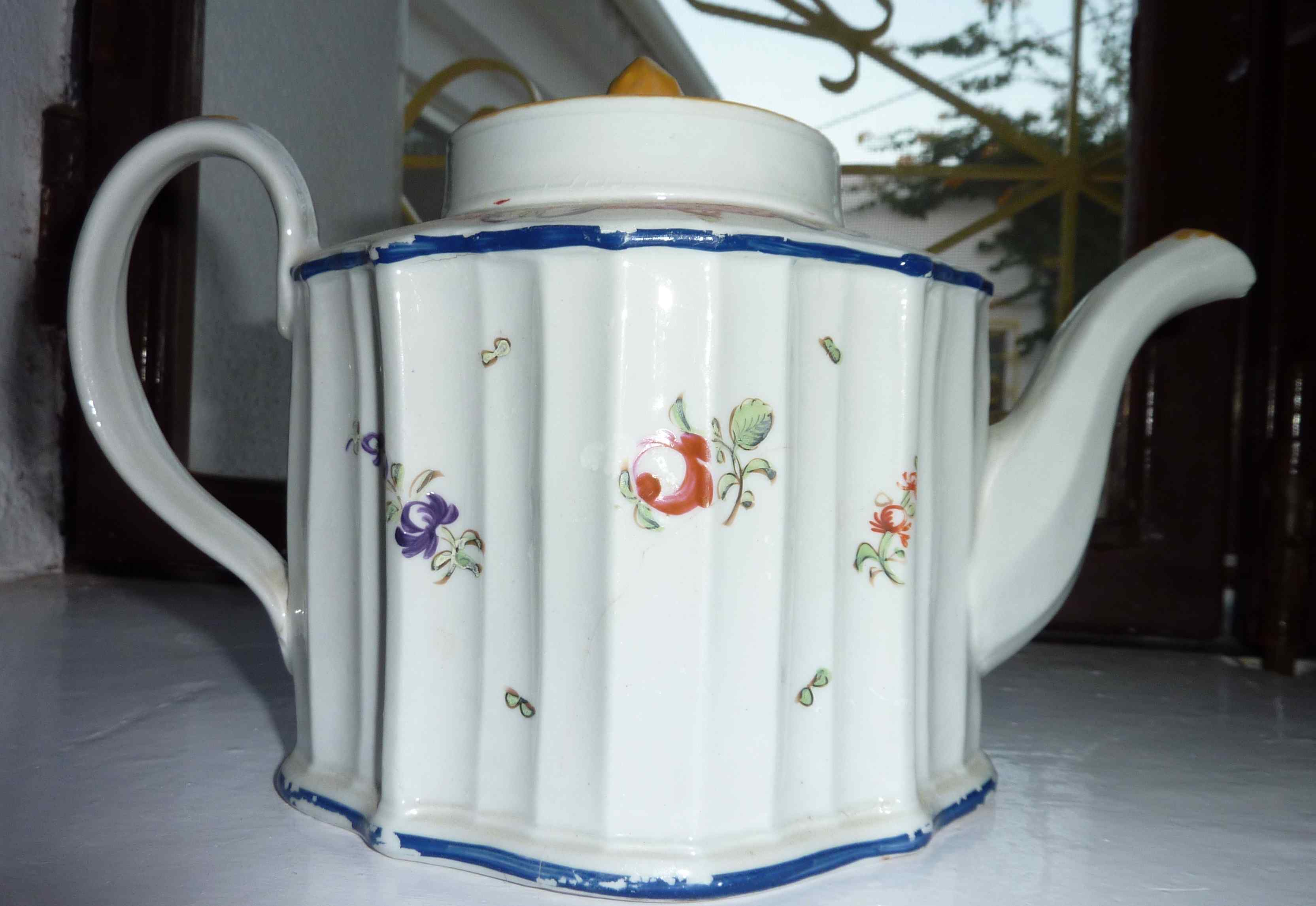 I feel privileged that I have had the opportunity to see and touch an important part of England´s manufacturing and cultural heritage without going too far from my home in the Algarve. There is irony in the fact that Jean has brought her collection of tea time porcelain to Portugal, when it was Catherine of Braganza who going the other way introduced to England the custom of drinking tea in the afternoon which made the invention of this porcelain essential.