A guided walk around Olhão

It was with great pleasure that the Association accepted an offer from the President of APOS (Associação de Valorização do Património Cultural e Ambiental de Olhão), António Brito, to guide an English speaking group around the ´exotic´town of Olhão.

Olhão is quite a young town. It was founded by fishermen and their families who were seeking to escape from the rules and regulations of the stuffy bigwigs of Faro. One reason why there are so few old stone buildings in Olhão is because Olhão people were prohibited from building in stone because of Olhão´s lack of municpal status. This problem was resolved as a result of the bravery of a few Olhão fishermen. After the insurrection which began in Olhão and which ejected the French invaders from the Algarve in the summer of 1808, Olhão fishermen set sail across the Atlantic in a small boat (the Bom Sucesso) with only rudimentary maps. They wanted to bring news to the Queen of Portugal, at that time living in exile in Brazil, that it was safe for the Royal Family to return home. For various reasons, the royals did not return until 1821, but D João the Prince Regent, promoted Olhão to the status of a town. It became Vila do Olhão da Restauração and the town still has that name; and the inhabitants could now build in stone.

On 16 October, 2010, António guided 23 people around historic Olhão. The walk started at the home of the Olhão Recreational Society (A Sociedade Recreativa Olhanense); the first society of its kind to be established in the Algarve. Only the most distinguished members of the local society were allowed to join - thus spurring on those who had been blackballed to set up societies of their own! We visited the main church (Igreja Matriz/Igreja da Nossa Senhora so Rosário). Luckily the doors were open and could view the tallest altar in the Algarve.

Opposite the church in the Praça da Restauração is the cooperative building (Compromisso Marítimo) at which seamen could pay in money in order to receive aid in times of sickness or hunger. Directly behind the Compromisso Marítimo is the Little Church (Igreja Pequena) which dates from 1715. This church was the first stone building to be erected in the town and is now used for funerals. We then entered the oldest part of the town (Bairro da Barreta) where the houses resemble cubes. The houses appear similar to the houses of the Mahgreb in North Africa but as Olhão is such a young town (it was 1715 when the first stone structure was built) this style of architectural design occurred over 500 years after the explusion os the Moors. This cubist style is unique in Europe and although it was influenced by syles of the Mahgreb, it is the style of Olhão.

The second oldest quarter (Bairro Levante) can be found to the north and east of the market. A walk along Rua Manuel Eusébio Ramires will take you past houses that belonged to wealthy middle class families. (En route, don´t forget to visit the markets and to view the Customs House (A Alfândega). 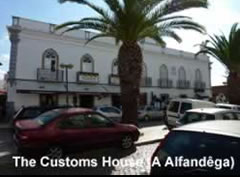 A walk around the old quarters can provide the observant tourist with wonderful insights into the history of the town. As we walked through the Barreta, we were lucky enough to meet a long time resident. She showed us photographs of the people from the small square where she had been born and still lived; she showed photos of her square as it had won a competition for the best decorations for the feast of São João (July 24). She also lamented the loss of the square´s only shade, a palm tree which had succumbed to the disease which is now endangering palm trees across the Algarve. Members of our group took up the challenge to raise money to replace the tree and the shade!

There are so many magnificent buildings (usually belonging to the important business men of the canning industry or wealthy ship owners) in Olhão that are worth a look at such as houses 9 , 18, 70-82 and 102 on the Avenida Bernadino da Silva. Casa Baeta (70-82) is decorated with historical tiled panels created by Jorge Colaço, an azulejo artist of international fame who was responsible for tile panels donated to British Queen Alexandra (these panels are now at Windsor Castle). He also created the panels which grace the railway station of S Bento in Porto. The work of one of Portugal´s most famous tile artists in under threat here in Olhão as the house is now threatened with demolition. See it now, while you can, or help save it!

The Guia Turístico de Olhão (tourist guide of Olhão) may be obtained at any of the local newsagents for a mere €2.

Details to follow about further guided town walks in the Algarve.

For more information about APOS: www.olhao.web.pt