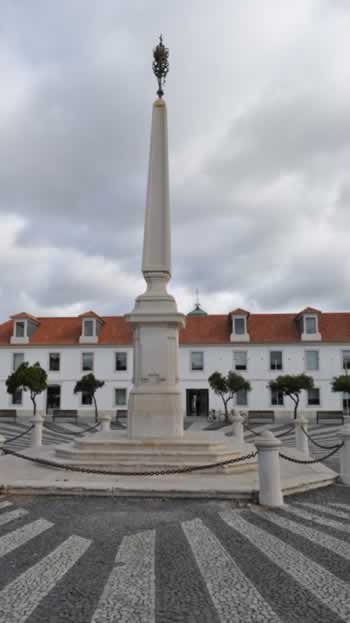 The obelisk in the centre of the central square of Vila Real de Santo António was inaugurated in 1776. It commemorates the king (D José) in whose reign the new town was established within three years. The reason for the obelisk was to celebrate that the new town was built so quickly. The moving force behind the development was the Marquês of Pombal, who fell from power the next year, when king, D José died. 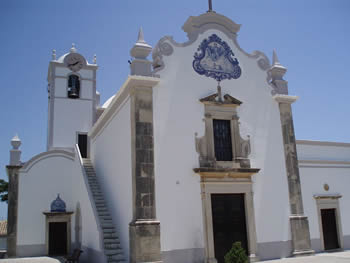 The Church of São Lourenço in Almancil dates from the end of the 1600s. The church has only one nave (no aisles). It is decorated inside with azulejos manufactured by Policarpo de Oliveira Bernardes, to show scenes from the life of Saint Laurence. The tiles came from Lisbon in 1730, and they are in blue and white. Except for the richly decorated retable on the high altar, the whole of the interior is covered in blue tile work, including all the walls and ceiling. For this reason, it is unique in the Algarve, and possibly also in Portugal. 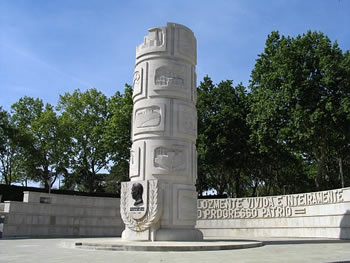 This monument to one of the Algarve´s most famous sons, Duarte Pacheco, was erected in Loulé. The images in relief portray Pacheco´s work as Minister of Public Works in the government of the Estado Novo, and there is a bronze bust of him at the base of the monument. It was inaugurated on the tenth anniversary of Pacheco´s death (16 November, 1953) by the President of the Council of Ministers, Dr António de Oliveira Salazar. The monument was financed by donations from every Câmara in Portugal (I suspect that not all these donations were made willingly). 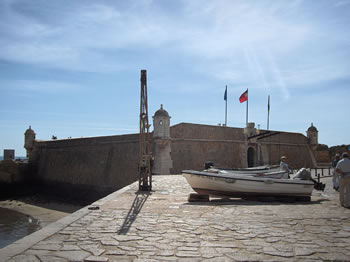 The fortress is on the western bank of the river Bensafrim that accesses the harbour at Lagos. It is called Forte da Ponte da Bandeira, or Forte do Pau da Bandeira; or Forte de Nossa Senhora da Penha de França; or Forte do Registo. It was built to defend Lagos, the seat of the Governor of the Algarve. Begun by the Conde de Sarzedas in about 1680, it was finished in 1690 by the Marquês de Niza (a descendant of Vasco da Gama). The former palace of the Marquês is in Lisbon, in the parish called Penha de França.

The name for sentry boxes is guaritas; the four on each corner of this fortress are unusual because they are not contemporary with the fortress. They were added in the 1960s. 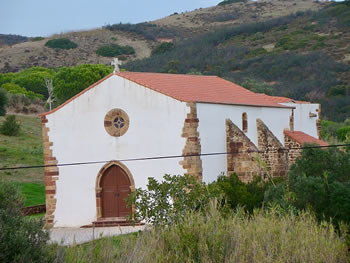 This building is called the Capela (or Ermida) de Nossa Senhora de Guadaloupe. It is alongside the EN 125, in between Budens and Raposeira in the Concelho of Vila do Bispo. The person who used it as an oratory was Prince Henry the Navigator (1396 – 1460). His House at the End of the World with its own chapel was not yet built, and when the Prince visited this part of the world, he used this chapel.

Possibly built by the Templars in the second half of the 1200s, it is a simple one nave building. It survived the Great Earthquake intact, and became a National Monument in 1924. 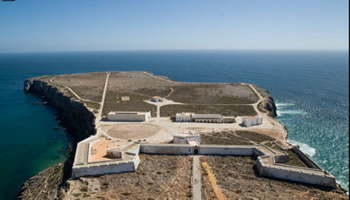 We have only one image of Prince Henry´s building, which he called his House at the End of the World. It is a drawing made by an English sailor in 1587, as Drake's destructive expedition was returning from singeing the king of Spain´s beard in Cadiz. We do not know if Drake destroyed the buildings, but if not, the Great Earthquake certainly did. What we have now is completely different, and was built in the twenty-four years after 1793. Prince Henry would probably recognize the chapel (Igreja de Nossa Senhora da Graça) although it too was damaged in the earthquake, and was repaired. In his time the chapel was dedicated to Stª Maria. 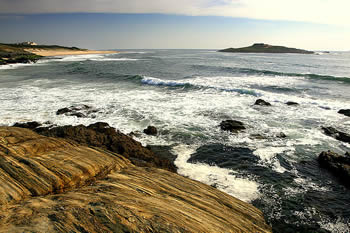 The two fortresses are at Pessegueiro, parish of Porto Covo, south of Sines, and in the Southern Alentejo. They were begun in the reign of D Felipe I (we know him as Philip II of Spain). The reason for their construction was to combat English, Dutch and Barbary privateers. It was hoped to establish a port defended by the two fortresses. Visiting the place, I found it difficult to imagine how a port might have worked in such a remote area, open to the winter storms of the Atlantic. It was a strange project, and it is not surprising that it did not flourish. In the 1960s, there were plans to turn the fortress on the beach into a hotel. That too came to nothing.

The cathedral at Silves was begun in 1268, as soon as Portugal and Castile had agreed on their mutual border at the Treaty of Badajoz (1267). The handover of sovereignty happened when D Diniz (b 1261), the son of D Afonso III and his Spanish bride, reached the age of seven. D João II died at Alvor in 1495, and he was buried in this cathedral, but in 1499 D Manuel I came to Silves to exhume his remains and re-inter them at Batalha. With the silting of the River Arade, inland towns lost influence to coastal towns, and the bishop asked in 1533 to transfer the see to Faro, and his successor received permission in 1577, forty-four years later. 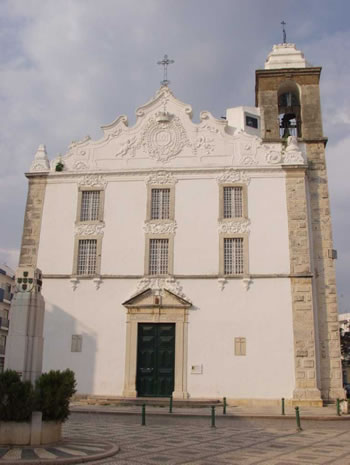 The Igreja Matriz of Olhão was begun in 1698 soon after Olhão became its own parish, breaking away from that of Quelfes. The church was completed in 1715. The small outside chapel is dedicated to Senhor dos Aflitos, and is fronted by wrought iron gratings. The chapel houses all sorts of donations in the form of parts of the body, and it is here that people pray for cures. In 1808, the people of Olhão were led into insurrection against the occupying French when Colonel José Lopes de Sousa ripped off the wall a French notice, which was appealing for loyal Portuguese to assist against the Spanish revolting in Andalusia. And so, it was he who began the process by which the French Army was expelled from the Algarve. 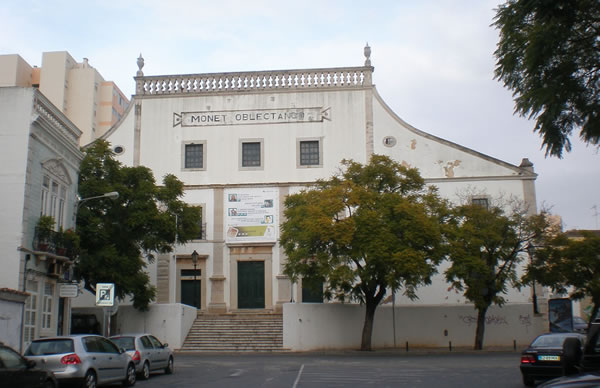 Teatro Lethes in Faro is now a Theatre. It was built in 1605 by the Jesuits as a college, Colégio de São Tiago Maior. Construction costs were partly funded by Bishop Mascarenhas. Abandoned after the Jesuits were expelled in 1759, it was bought by Lázaro Dogliani in 1843 and opened as a theatre in 1845. The wording is from the Jesuits, and means He teaches by entertaining; or in paraphrase, people learn better if their teacher amuses them.