The Peninsular War Part 5: From Bussaco to Albuera

Behind the Lines - The Portuguese Divisions of Wellington´s allied army savoured their first triumphant encounter against the French at the battle of Bussaco on 26 and 27 September 1810. Masséna´s French in column could not deal with Wellington´s line formation and they suffered heavy casualties, estimated at four times as many as the allies.

This was a battle fought by Wellington for no military reason.  He was keen to register a victory to bolster the weak Tory government in Britain, and to give Portugal heart for the coming siege.  Wellington made the strategical withdrawal which he had foreseen two years previously behind the lines of Torres Vedras.  His whole army was in place by 10 October.  Masséna himself arrived at Sobral in front of the lines 5 days later.

British and Portuguese had worked hard to denude the countryside of foodstuffs so that the French would have nothing to live on.  Masséna had no supply train and there was barely any food for the French army to steal.  Masséna´s starving army retreated on 5 March having lost 19,000 men through hunger induced disease.  The British and Portuguese followed closely behind both to hustle them and so prevent them from seeking fresh supplies and to squash any idea that they could cross the Mondego at Coimbra and so regroup in Northern Portugal.

Fuentes de Oñoro
The French made for the border at Almeida and then retreated to Salamanca to regroup.  French troops held the Portuguese border fortress at Almeida and they also held the forts at Cuidad Rodrigo and Badajoz in order to prevent the allies from entering Spain.  Wellington´s aim was to prevent the French resupplying Almeida and to take the Spanish fortresses as a preliminary to his own invasion of Spain.  However, Masséna´s reinvigorated army was quickly back on the borders of Portugal on 3 May intending to resupply his force occupying Almeida. Wellington with an army of 37 000 determined to bar his relief column at the small village of Fuentes de Oñoro just inside the Spanish border between Ciudad Rodrigo and Almeida.  The battle lasted 3 days.  Masséna had 42 000 infantry, 4 500 cavalry and 38 guns was pitted against Wellington´s 35 000 infantry, 2 000 cavalry and 48 guns. 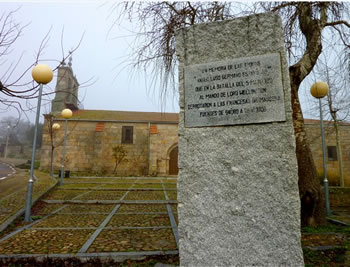 Wellington´s troops occupied a front of five miles and his concentration was at the village of Fuentes.  As was his practice, he kept most of his force hidden behind ridges and crests to disguise the strength of his army from the enemy.  Battle was engaged on 3 May when French columns were sent to bulldoze the allies out of the village.  The French were pushed back by Wellington´s counter attack in line formation:  the French command had learned nothing from their defeat at Bussaco.  Allied casualties were 259 against the French 652.  Marshal Masséna then spent the whole of 4 May reconnoitring the British position, and  on the night of 4 May sent off 21 000 men for a dawn attack against the weak allied right wing.  Before daybreak they had closed in around the 4 600 men of the 7th Division.  Wellington´s 3rd and 1st Divisions took on an L shape formation and the 7th Division managed to withdraw through their lines.  Masséna had ´borrowed´  the Imperial Grenadier Cavalry  from Marshal Bessières and he sent orders for them to attack the retreating infantry which could have swung the battle in his favour.  Fortunately for the allies, the Imperial Grenadier Cavalry would not attack without a specific order from their Commander-in-Chief Marshal Bessières, who could not be found, and thus the British infantry managed to escape.

One of the most famous incidents of the war occurred during this manouevere.  Captain Norman Ramsey and his gun team during the withdrawal of the 7th Division lingered too long in keeping the French cavalry at bay, and they were cut off by a horde of cuirassiers. "A thick dust arose and loud cries and the sparkling of blades and flashing of pistols indicated some extraordinary occurrence.  Suddenly the multitude became violently agitated, an English shout pealed high and clear, the mass was rent asunder and Norman Ramsey burst forth, sword in hand, at the head of his battery, his horses breathing fire, stretched like greyhounds along the plain, the guns hounded behind them like things of no weight, and the mounted gunners followed close, with heads bent low and weapons pointed, in desperate career".  (Napier).
In the village of Fuentes itself the French infantry attacked soon after dawn and drove the defenders back to the church near Wellington´s command centre.  They were finally driven back over the river by the 88th Connaught Rangers and at 2 pm Masséna called off his attempt to resupply Almeida.  The French had lost 2 200 men and the Allies 1 400. There was a  new found faith in Wellington and his tactics was the greatest factor in British belief that France could be defeated.  The Allies felt it and so did the French.  French self-belief was foundering.

Having fought a costly battle to prevent Masséna resupplying Almeida, Wellington was furious when most of the 1 400 French garrison managed to elude the besieging ring and to rejoin Masséna at Ciudad Rodrigo.  The French also destroyed a large part of the fortress and its food supplies.  This escape succeeded only because of the negligence of a senior officer, who kept Wellington´s order in his pocket until he had finished his dinner. In the British Cemetery at Elvas is a memorial to Colonel Bevan, who committed suicide after being unjustly blamed by Wellington for this disaster.

Bloody Albuera
Ten days after Fuentes, Wellington despatched two divisions to the south to help Marshal Beresford at the siege of Badajoz.  He too set out, and as he did, the sister battle to Fuentes was being fought at Albuera on 16 May, just over 200 km away.  This battle became the most fiercely discussed British battle of the 19th Century.  Marshal Beresford had invested Badajoz on 5 May and on 12 May he heard that Maréchal Soult with his Army of Andalusia was marching north to the relief of the city.  Beresford immediately wound down the siege and led his 20 000 men to Albuera which had been marked out for him by Wellington as the most defensible battle site.  Beresford was joined on the eve of the battle by 14 634 Spaniards to add to his army of 9 572 British, 1 098 Germans and 9 980 Portuguese (35 282 in total).  Although Beresford had Wellington´s explicit permission to oppose Soult in battle, his inclination was to withdraw, but his Spanish allies were eager for a fight. 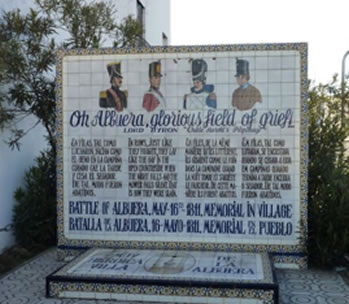 Soult had 24 260 men at his disposal.  His force was homogeneous, compact and professional.  It also marched very quickly and arrived at Albuera before the Allies were properly ready.  He directed his main attack on his left wing and Beresford had to bring up support to the hard pressed Spanish on the right; in this battle, the Spanish formations performed very creditably, and as they were withdrawn through the British lines, they insisted that they were obeying orders to retire, and they were not running away.  Colborne´s brigade of the 1st Division did great damage with their musket fire until a sudden and fierce shower dampened their powder and hid from them the approach of the French cavalry who destroyed the three badly deployed battalions in 10 minutes.  319 men killed, 460 wounded and 479 taken prisoner.  Hoghton´s and Abercombie´s brigades came up in support and the French cavalry withdrew.

The French reorganised their columns and although the British formed their famous line, only two ranks deep they suffered immense casualties from the French artillery in this part of the battle.  Beresford tried to bring over reinforcements of Portuguese from the left flank but they were too far off. Hoghton´s brigade were in faced the 8 000 strong French column.  They were at the centre of the battle for the rest of the day and they gave no ground, but at horrific expense.  At the end of this bloody day, the senior surviving officer of the brigade was a captain and 63% of the brigade were casualties.

Because Beresford had galloped off to fetch Alten´s German Division as support, there was effectively no British commander on the field. However,  the commanding officer of the 4th Division, Lowry Cole, was prompted by ADC Henry Hardinge, to bring forward his men on his own responsibility. Cole had been explicity instructed to remain where he was in reserve until ordered by Beresford to move and strictly speaking, Cole was guilty of insubordination.  But it is true that if Lowry Cole had not brought up the 4th to solidify the British line, this battle must have been lost.  The French continued to attack through the day in the centre of the the village but the King´s German Legion was able to hold on without much difficulty until Beresford ordered them to retire, form up, and go to the support of the struggling 2nd Division.  It seems that at the end of the battle Beresford had all but lost his nerve. Although he denied it later, two of his senior commanders said that he had ordered a retreat before the French themselves withdrew.

British casualties were 6 000 out of 35 000 and the French losses 7 000- 8 000 out of their 25 000.  In his report to Bonaparte, Soult admitted to losing only 2 900 and he therefore claimed a victory. Wellington arrived at the battlefield two days later and read Beresford´s depressing report, designed for publication in London.  "This won´t do", he said.  "Write me down a victory.  Privately, Wellington admitted that another such battle will ruin us."

Strategically, the battle of Albuera was inconclusive.  Because of the immense losses suffered by the British in particular, it may have been better if the Allies had retired in front of Soult´s force.  In terms of morale however, it was a victory for the allies because it seems neither the French soldiers nor their commander ever wholly recovered from the effects of that terrible day.  Maréchal Soult wrote of the allied infantry "I had turned their right, pierced their centre and everywhere victory was mine, and they did not know it and they would not run."

Albuera is unusual in that both British and French claimed the victory and it forms a part of the battle honours of the English regiments and also appears as a battle honour on the Arc de Triomphe for their French opponents. Inconclusive as the battles of Fuentes de Oñoro and Albuera were, they mark a turning point in the Peninsular War.  The legendary French Army was not invincible after all and in the allied army belief was growing that they and their commander, Old Nosey, were unbeatable.

In Part 6 with the storming of Ciudad Rodrigo and Badajoz and the Battle of Salamanca on 12 July 1812 we shall see that Wellington proves himself more than just a defensive general.