Al-Andalus: The Story of Muslim Iberia

PART 1 OF 4 - THE CONQUEST: Andalusia refers today to the south-western region of Spain and includes Almería, Cádiz, Córdoba, Granada, Huelva, Jaén, Málaga and Sevilla. Historically, the most important part is the fertile valley of the Guadalquivir, on which lie the cities of Córdoba and Sevilla.  By contrast, the term al-Andalus originally referred to the whole of Muslim Spain, which itself did not always cover the same area.

The term al-Andalus is probably the Arabisation of the Visigothic name of the Roman province of Baetica, landa-hlauts which quickly became al-Andalus.  The Arabic invaders applied the word Ishbâniya to the Christian part of the peninsula.

Following the death of the prophet Mohammed in 632 AD, there was a rapid expansion of conquests in Asia and North África by his successors. The Muslim conquest of Hispania was a logical extension of their conquest of North África, since they reached the Altantic seaboard of modern Morocco in 708.  Turning northwards  in 710, a small reconnaissance force crossed the strait and landed at Tarifa; a larger body under the Berber Tariq ibn Ziyad followed in 711 possibly at the request of the Visigothic king Akhila.  It is likely that the invasion and subsequent conquest of Hispania was carried out without the approval of the ruling Caliph in Damascus.

Within three years Tariq and his area commander, Musa ibn Nusair, had conquered Córdoba, Sevilla, Mérida, Niebla, Beja and had even reached Oviedo on the north coast and Galicia.  Both Musa and Tariq were recalled in disgrace to Damascus and the campaign resumed under Abd al-Aziz who conquered present day Portugal, Catalonia, Narbonne, then Elvira, Murcia and Málaga.  By the time of his Damascus-ordered murder in 716, the conquest of the peninsula and the Visigothic kingdom was nearly complete.

Over the next 40 years the conquerors quarrelled among themselves, murdered each other and summoned support groups from África, but the offensive in the north against the Christians continued and came to a halt only after the Frankish king Pepin retook Narbonne in 751.  The Christian counter-offensive recovered Asturias, León and Galicia and the border settled on a line to the south of the Pyrenees.  While Christians saw this counter-offensive as the beginning of the Reconquista, for the Muslims the whole period was one of ordinary border problems.

Within these conquered territories, those who chose to retain their religion were required to pay a poll tax.  They could avoid this tax by converting to Islam and new converts were called mawla. There was an influx of colonists with Arabs making for the south and east of al-Andalus and Berbers in the poorer lands of the west and centre.  There were Berber revolts in 729 and  740-742 which were crushed before the Arabs and Syrians fell out.  The Berber revolts had three major consequences.  First, at this time Visigothic landowners were dispossessed in order that the Arabs could be rewarded.  The Damascus jund (regiment) was established in Elvira, the Jordanians in Málaga, the Palestinians in Jerez, those of Hims in Sevilla and the Qinnasrin at Jaén.  The Egypt jund was split between Murcia and Beja.

Second, while all this was going on, the Christians in Asturias under Alfonso I of Astúrias (739-757) retook the border fortresses and pushed the border down to the river Duero.  The area around the Duero remained empty as a buffer zone between the Moors and the Christians; it was a kind of no-man´s land known as the Desert of the Duero.  The third outcome of the Berber revolts was that the Umayyad Caliph in Damascus lost control of the western provinces as the Abbasid tribe ousted the Umayyads from power. The only safe bolthole for the sole survivor of the Umayyad clan in Syria was the Maghreb and specifically al-Andalus.

So it was that the last of the Umayyads, 20 year old Abd al-Rahman, was proclamied Emir of al-Andalus in the mosque of Córdoba on Friday 14 May 756.  His need to reward his followers led to the dispossession of many of the older Visigothic aristocracy.  He defeated Berber and Abbasid revolts within his Emirate and it was he who founded the powerful and affluent well-organised state which heralded 200 years of cultural splendour.  The Emirate was guarded on its northern border by three Marches based in Zaragoza, Toledo and Mérida, each of which was controlled by a qa´id or margrave, a military governor. The Córdoba heartland was divided into counties each under a civil governor or wali.

The Emirs of al-Andalus employed barbarous means to maintain a balance of power among the many rebellions and family feuds which they faced.  The severe al-Hakam I (796-822) faced a conspiracy among the Arab elite who felt their position eroded.  Summary crucifixion was the outcome for 72 of them. In Córdoba the population of the suburb to the south of the Roman bridge rebelled at various times between 805 and 818 (probably about taxes). The suburb was finally razed and the people exiled to Morocco.  According to legend, his son (Abd al-Rahman II who would succeed him in 822) was sent to the turbulent city of Toledo in 797.  He invited 5 000 nobles to a dinner of reconciliation and as they began to feast, promptly had them murdered and thrown into a ditch (Day of the Trench). 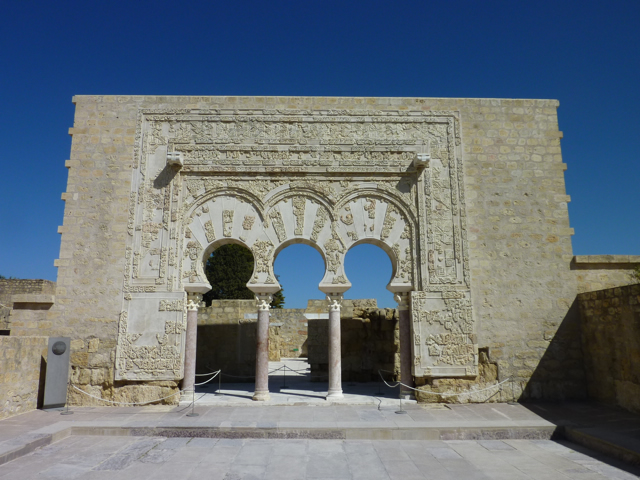 Economic and social factors caused revolts in the Marches and between 852 and 912 the new Emir Mohammed was under pressure during a period called the Fitna (meaning a time of discord).  There was little dissent over religion. When Abd al-Rahman III (912 – 961) came to the throne al-Andalus was in such a mess that it was not until 960 that he could contemplate success in his struggle to restore internal unity and to reestablish the external borders.  He took Ceuta in 931 and Tangier in 951 as protection of his regime from threats posed by North African tribes.  He took the title of Caliph for himself as an assertion of equality for his status in al-Andalus with the Abbasid Caliphs in Baghdad and the Fatimid Caliphs in Kairouan.  As Ceremonial arcade , Madinat al-ZahraCaliph, he became the political and religious leader of the Andalusian muslims and protector of Christians and Jews in his Caliphate. The political and religious nature of this title is similar to that of the medieval Popes.  In the fashion of Caliphs, he founded a new city, Madinat al-Zahra, only eight kilometres from Córdoba, which in the Muslim world proclaimed his independence and power. 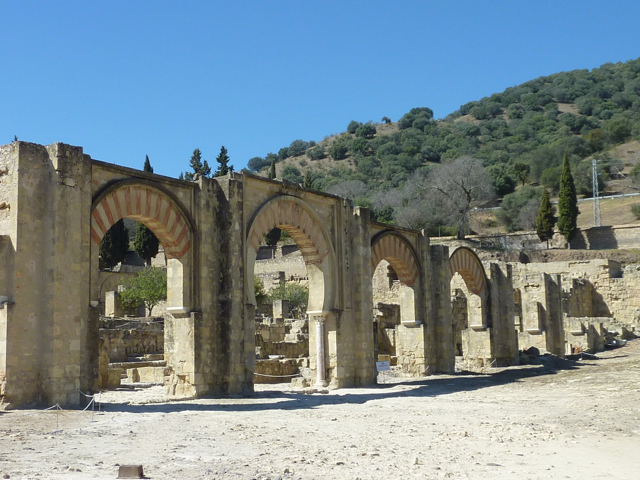 It was under the strong rule Abd al-Rahman III that al-Andalus reached its zenith.  The city of Córdoba flourished and became the biggest city in Europe with over 500 000 inhabitants.  Tenth century Islamic Spain was economically and intellectually ahead of the rest of Europe.  Its prosperity was based on exploitation of agricultural resources by the use of irrigation, on utilising the land´s natural resources and by the development of urban trades and crafts. Although there was political enmity between the Umayyads of al-Andalus and the Abbasids of Iraq there were also enduring bonds of cultural friendship:  music, manners, culinary style, dress and hair styles and the games of chess and polo were all imported from Baghhad.  It is probable that the two ends of the Arabic world also exchanged ideas on building and architecture.

Some of the most influential and famous men of contemporary al-Andalus were: Abu al-Aasim Khalaf ibn al-Abbas al-Zahrawi (known for short as Abulcasis) (936 – 1013) who was court physician to al-Hakam II.  He was the greatest medieval surgeon, the father of modern surgery and he wrote kitab a-tasrif, a 30 volume encyclopedia on medical practice.  Pharmacologist Ali ibn al-Husain ibn al-Walid (997 - 1074) is known simply as Abenguefit and his book, known in Latin as De medicamentis simplicibus, was widely used in medieval Europe.  The polymath Maslama al-Majriti (d 1008) introduced new surveying practices and had skills in astronomy, mathematics, economics as well as a chemistry.

Although the urban Christians (or Mozarabs) spoke a proto-Spanish, they also used the language of the conqueror. Their way of life and their Hispanic thought-patterns became heavily influenced by Arab forms.  Álvaro of Córdoba complained in the mid tenth century that fellow Christians preferred Arabic poetry and romances to the Latin of the church fathers, and it appears that at that time many Christians converted to Islam, which must have reduced their tax bill.  The Jewish community by contrast remained homogeneous and independent and played an active part in intellectual and cultural life but above all in commercial life.

After the death in 961 of Abd al-Rahman III the Caliphate gradually became subject to civil unrest as different factions tried to usurp the throne and the central power of the Caliph quickly waned.  In this power vacuum, municipal councils of each city set themselves up as local rulers. In 1031, the citizens of Córdoba abolished the Caliphate, and the rule of the petty kings (taifas) emerged. Unity in the Moslem state was reimposed by the invading North African Almoravids only after 1085.

There was another body of people known as Saqaliba. Although referred to as Slavs, this heterogeneous community was composed originally of war captives from Germany, France and Italy.  Their numbers were swelled by purchases of fresh European slaves and by the beginning of the 11th century there were 3 750 in Córdoba, owing allegiance to the person of the Caliph. After the fall of the Caliphate, their military background and rootless character played a major role in the anarchy which followed.