The legacy of the Romans and the Moors in the Iberian Peninsula is well known, but much less well known is the history of the events of the 302 years that may be referred to as the Dark Ages of Iberia.

Who were the Goths?
We often hear the terms Visigoth and Ostrogoth (respectively western and eastern goths) but contemporary sources refer only to the Goths. It is nowadays thought that the Goths originated in the area on the Baltic currently known as Poland. The Goths were culturally, linguistically and genetically heterogeneous and were welded through recruitment and service under the Roman Emperor Theodosius 1 (379-395) although the composition of the group was constantly changing. The Romans referred to them as barbarians, but they were in effect Christian military allies of Rome.  In return for military service on behalf of the Roman Empire, they required pay and rations which the Romans were often unwilling or unable to provide. In these circumstances, the barbarians turned on their Roman allies to take by force the wages that the Romans were unwilling to pay.

The barbarian invasion of Iberia and the Gothic conquest 456 - 507
After the Alans, Sueves and Vandals had invaded Hispania in 409, the Romans were never again able to re-impose their authority on the whole of Spain. The Romans managed to hang on to their north-eastern province of Tarraconensis (roughly speaking modern Catalonia) but the Suevi, Alans and Vandals shared the rest.

As allies of Rome, the Visigoths under Wallia (415-419) undertook to re-establish Roman rule in Hispania and in their campaign they effectively destroyed the Alans while the Vandals emigrated to the area around Carthage in North África (modern Tunisia).  The Romans rewarded the Visigoths with a concession of territory, and handed over to Visigothic control the area of south west Gaul which we would call Aquitaine.  Meanwhile the Suevi took control of much of Hispania and they established themselves in Mérida and most of the south west of the peninsula.  The Suevi then made the mistake of attacking the Romans in the north east (Tarraconensis) and were defeated at the battle of Orbigo (456) by the Visigoths who were again fighting on behalf of the Romans.  The Suevi retreated to northern Galicia where their kingdom survived until the late sixth century.

The Visigoths realising that the Roman Empire was weak then took over most of the Peninsula and the Visigothic king Euric (466 - 484) took the rest of Roman Tarraconensis in the north east.  Euric had acquired Provence and Auvergne by 474 and the Visigothic kingdom with its capital city of Toulouse then included Aquitaine and most of Hispania. The Visigothic government firmly put down attempts by rebels to set up separate kingdoms during this period.

In due course, the Visigoth army was defeated at the battle of Vouillé by the Franks in 507 and then the Franks themselves were attacked by an Ostrogothic army from Italy.  The upshot was that the Visigoths lost their kingdom in Aquitaine and had to centre their interests in Spain and Narbonensis, with their capital at Toledo. Around this time as well, Visigothic kingship became an elected office as the aristocratic elite did not wish any one family to establish a monopoly on the office.

Around the year 550, the Eastern Roman Emperor Justinian decided to attempt the reconquest of the Roman provinces in Spain and rapidly conquered an area stretching from Murcia to Faro in the Algarve.  They called this reconquered province Spania. It took the Visigothic kings until 624 finally to expel this threat to their united Hispania.  The Visigothic king Leovigild also absorbed and annexed the kingdom of the Suevi in 585.

The Nicene Catholic Kingdom of the Visigoths (586 - 672)
When the Visigoths had converted to Christianity in the fourth century, Arianism had been the dominant Christian dogma.  (Arians believed that because the son of God was begotten by God and conceived by the Virgin Mary, then there was clearly a time when the son of God did not exist.  He could not therefore have an equal divinity with God.  The Council of Nicaea in 325 declared that the Father and the Son were equal and in 381 the Holy Spirit was added as the third equal partner in the Trinity).  Reccared´s conversion in 587 from Arianism to the now dominant Nicene dogma was highly symbolic and he reconciled the two churches within his Nicene kingdom.

The history of the Christian Visigothic monarchy from the conversion of Reccared in 587 to the defeat of Ruderic in 711 was dominated by a small  elite of 15 -20 nobles of no more than two dozen aristocratic families, from among whom a new king was elected at the death of the old one. The Seventh Council of Toledo (646) prescribed excommunication for anyone who plotted against the king.  The fact that King Chindasuinth (642 - 653) died peacefully in his bed at the age of 90 was probably due to his liquidation of more than 700 of the leading Visigothic aristocrats.  Such draconian execution reduced the number of potential rebels to his rule but it also seriously weakened the military command of the Visigothic state at the death of the king. 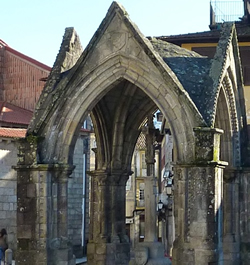 The Twilight of the Goths (672 - 710) or Götherdämmerung
Wamba (672 - 680) was elected king at the Eighth Council of Toledo.  He was faced by an immediate conspiracy in Narbonne and raids by the independent Basques into the Ebro Valley.  Wamba himself dealt with the Basques and he deputised Duke Paul to deal with the rebels in Narbonne.  No sooner had he arrived in Narbonne than Duke Paul joined the rebels and calling himself King in the East, referred to Wamba as King in the South.  Having seen off the Basque raids, Wamba besieged Paul in the Roman amphitheatre at Nîmes before capturing and scalping him.  Wamba confiscated the rebels´ property and exiled them but in 683 his successor Ervig allowed them back and restored their property to them.  The next king, Egica despoiled Ervig´s estate and exiled the adherents of his family.  Egica´s son, Wittiza, pardoned all those convicted by his father and returned their property. Wittiza was succeeded by Ruderic in 710 and the sources suggest that Ruderic violently siezed the crown.  It is clear from this cycle of events that the final years of centralised Visigothic rule in Spain were marked by civil war, treachery and violent dissension in the ruling elite.

The End of the Visigothic Kingdom (710 - 711)
The historical sources are sketchy for the years 710 and 711, but it appears that there were two Visigothic kings at the same time after the death of Wittiza in 710.  Ruderic was the elected king in Toledo and Lusitania and Wittiza´s presumed son Achila ruled over Tarraconensis and Narbonensis in the north.  It seems likely that Ruderic was opposed even in southern Hispania by Visigothic adherents to the cause of Achila. 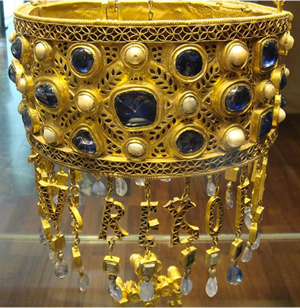 Raids by Arabs and Berbers from North Africa had been taking place since at least 708 and it seems that Ruderic while opposing an Arab raid was killed during the skirmish.  This event is referred to as the Battle of Guadalete (711), but we really have no idea of how many people were involved, although some historians declare that there were tens or even hundreds of thousands of combatants.  The Arab raiding party under Tariq took the advantage to proceed northwards and rapidly took Córdoba and Toledo and Arab forces quickly overran the rest of Hispania.  Ruderic´s rival Achila and Achila´s successor Ardo held out in Narbonne until 721, when Arab forces captured the city.

The rapid fall of the Visigothic state was probably due to the fact that the number of ruling families was quite small, and made smaller still by the actions of King Chindasuinth.  Once these represenatives of government had been liquidated, there was literally no-one capable of leading the resistance to the Muslim attack.

Religion and the Law under the Visigoths
Over the history of the Visigothic kingdom 30 synods were held, many of them in Toledo and there were also eventually 18 councils of Toledo, in which king and bishops cooperated in the government of the kingdom.  Notwithstanding the fact that there had been a  Jewish community in Iberia since at least 70 CE, the Visigothic state began in the seventh century a systematic persecution of the Jews.   Following his conversion to Nicene Christianity, Reccared (586 - 601) was the first king, and by no means the last, to legislate against the Jews because of their religion.  The Visigothic catalogue of laws was an amalgam of Roman and Visigothic law first published by Reccesuinth in 654.  The Liber Iudiciorum (book of judges) was used by Christian communities during the Moorish occupation and it later became the basis for early modern Spanish law.

Visigothic Architecture
There are today no surviving Visigothic buildings in major cities - they have all been either superseded or built over.  The Visigothic churches that remain are usually in remote areas and the best of them have been heavily restored or rebuilt.   There are two examples in Portugal:  S Frutuoso  (Braga) and S Gião (Nazaré); and seven in Spain:  S Pedro de la Nave (Zamora), S Juan de Baños (Palencia), Sta Comba de Bande (Ourense), Sta Maria de Quintanilla (Burgos), Sta Maria de Melque (Toledo), Sta Lucía de Trampal (Cáceres) and S Pedro de Alcântara (Málaga).

There are whole museums dedicated to Visigothic remains in Beja, Mérida and Toledo.   There are museum displays of Visigothic artifacts in other towns but these remains are often merely pieces of carved stone with little in the way of explanation explanation of their purpose.

Visigothic Jewellery
In the years 1858 – 1861 near Toledo there was a significant discovery of Visigothic treasure.  This treasure trove became known as the treasure of Guarrazar.  Within this find were many pieces of gold work, including Visigothic votive crowns and other items of royal provenance. It is thought that this royal treasure was kept at Toledo, the capital of the Visigothic state, and that on the rapid approach of the Muslim forces, it was hurriedly collected and secretly buried.  Inspection of the artifacts reveals that Visigothic gold work was influenced by Byzantine practices, and the crowns were votive offerings and not meant to be worn. Some of the gems came from Sri Lanka although the techniques for mounting them were wholly Germanic. They are a unique surviving combination of Byzantine and Germanic craftsmanship. This treasure was displayed in both Madrid and Paris and sadly in 1921 some was stolen and has now disappeared. Among the most valuable pieces were the votive crown of Suinthila which was one of the pieces stolen in 1921 and never recovered and that of Reccesuinth which is now on display in Madrid.

Why Visigothic History is Relevant?
In the age of the Visigoths, Iberia was united for the first time under a native Christian ruler.  Following the conquest of much of Iberia by Muslim forces, it was the memory of the Visigothic Christian state which allowed the Christians of the north to refer to their own military campaigns as The Reconquest.  The only other period during which Spain and Portugal have been united was in 1580 - 1640 when the Spanish Hapsburg Phillip II inherited, bought and conquered Portugal.  Since that time, and certainly during the twentieth century, Portuguese governments have often been apprehensive of expansionist plans by Spain.  Such plans certainly existed in the 1900´s, in 1940 and even as late as 1975.  Neighbouring Francoist Spain feared that the Portuguese Carnation Revolution of 1974 was the first step towards a communist government in Portugal, and was preparing to take military action to prevent such a government from taking power. Even today some Portuguese publicly state that Portugal and its people would fare much better as part of a united Iberia. The dream (or nightmare) of political unity in Iberia is deeply rooted in the Portuguese psyche, and can be traced back to the days of Visgothic unity in Iberia.